Oscar Mayer had been at their Madison, Wisconsin location since 1919, and the complex served as the company’s headquarters since 1957. The plant officially ceased production August 2017, and 910 Mayer LLC purchased the property in October of 2017.

On July 11, 2018, laying the groundwork for the redevelopment of the former Oscar Mayer plant, Wisconsin Lt. Governor Rebecca Kleefisch announced that the City of Madison is receiving a $500,000 state grant to help finance infrastructure work on the site. 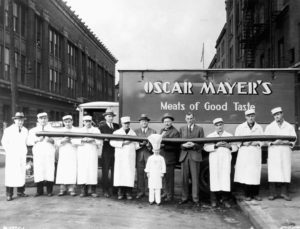 Work is now underway to redevelop the facility into a business and light industrial park called the OM Station (Old Madison Station).

Instead of a single user, multiple tenants will make use of the refurbished center. 910 Mayer LLC, a partnership between Rabin Worldwide and Reich Brothers, plans to repurpose many of the existing buildings on the site and attract thoughtfully-chosen tenants that will create sub-communities on the campus.

“The former Oscar Mayer facility was an important part of Madison’s workforce over the last 100 years,” said developer Orlee Rabin. “We look forward to working with the City of Madison to revitalize the site for multiple users and enabling the property to once again become an economic hub for the city.”

“We are grateful for the generous support of WEDC in helping us fix and modernize the electrical and gas infrastructure for the site, allowing us to jumpstart the redevelopment and bring in new users and jobs back to northern Madison,” she added.

The Idle Sites Redevelopment Grant from the Wisconsin Economic Development Corporation (WEDC) will be used to assist developer 910 Mayer LLC as it reconfigures outdated infrastructure at the site to deliver gas and electricity to each individual building on the 67-acre parcel. The work also includes upgrades at the buildings to comply with the federal Americans with Disabilities Act.

Reconfiguring the gas and electrical infrastructure will cost $1.8 million–$500,000 of which will come from the WEDC grant, with the rest funded by the redeveloper.

“While the vision of creating a modern business park that will serve multiple tenants won’t become a reality overnight, today’s announcement is a significant milestone for a project that has the potential to create hundreds of jobs and become a major economic driver in Madison and beyond,” said Lt. Governor Kleefisch. “Through the joint efforts of the state, the city and the developer, we see a bright future ahead for this century-old factory that has been a significant part of the city’s history.”

“The City of Madison is happy that less than a year after acquiring the property, the development team is taking the first steps to redevelop the site,” added Madison Mayor Paul R. Soglin, who joined Lt. Governor Kleefisch at the announcement. “Through the partnership with the state on this grant, we remain encouraged that the former Oscar Mayer property will continue to play an important role in the city’s economy and the community fabric of the north side.”

The infrastructure work, which is phase two of a six-phase redevelopment project, is now underway and is expected to be completed by July 2019.

The city is working with the new owners and stakeholders to reposition the site for future use. Mayor Soglin has appointed a 13-member Oscar Mayer Strategic Assessment Committee comprising Common Council members, neighborhood residents, and persons with labor and business experience to oversee a public process and provide guidance along with city staff and consultants to develop a strategic assessment of the site.

WEDC’s Idle Sites Redevelopment Program, created in 2013, stimulates investment and job creation at idle, abandoned and underutilized manufacturing sites that cannot be redeveloped solely by the private sector due to their scale and complexity.

The grants may be used for demolition, environmental remediation or site-specific improvements defined in the community’s redevelopment plan. The goal of the program is to advance the site to shovel-ready status or to enhance the site’s market attractiveness to encourage business growth.

Since the program’s inception, 18 communities have received more than $15 million in grants for economic development projects expected to create nearly 5,000 jobs and have an economic impact of more than $600 million.

Featured photo of Wienermobiles outside the Madison headquarters via Pinterest (author unknown).