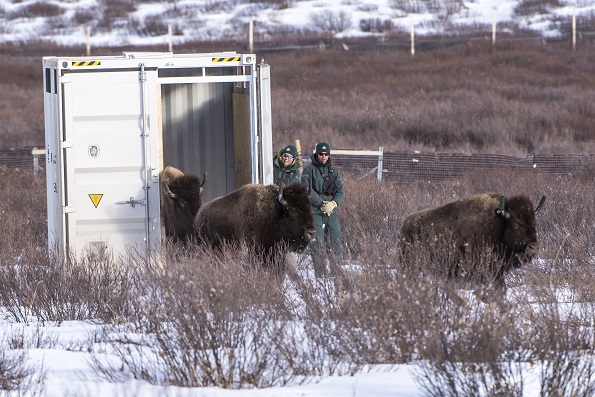 Parks Canada announced that on February 1, 2017, bison were successfully translocated to the Panther Valley, in the Banff National Park of Alberta. The historic return of bison coincides with the 150th anniversary of Canada’s confederation, after being absent from the wild for over a century, their homecoming is a historic and cultural triumph.

Harvey Locke, a conservationist, writer and trustee with the Eleanor Luxton Historical Foundation in Banff, deemed the day a historic moment. “This is a great day for Banff National Park. It’s a great day for Canada and frankly, it’s one of the great days for wildlife conservation in the history of North America,” he said.

Although free-roaming bison have been absent from the landscape for over a century, they were historically dominant grazers that helped shape the ecosystems of what is now Banff National Park. The restoration of bison to Banff will return a keystone species to the landscape, foster cultural reconnection, inspire discovery, and provide stewardship and learning opportunities. In the long-term, by re-establishing a new wild population within its historical range in Banff National Park, this will be a key contribution to national and international bison conservation efforts.

For 16 months, the bison will remain in an enclosed pasture in the Panther Valley, closely monitored by Parks Canada. In approximately June 2018, the herd will be released to explore the full ~1200km2 reintroduction zone in the remote eastern slopes of Banff where they will interact with other native species, forage for food and fulfill their missing role in the ecosystem.

This is the first step in the five-year pilot project that will inform future decisions regarding restoring wild bison in Banff over the long-term. Demonstrating world leadership in species recovery, Parks Canada is taking a careful, animal-health focused approach to translocating bison to Banff National Park. Parks Canada staff and partners involved in the process have the expertise to deliver the introductory heard from Elk Island National Park to their new home in Banff National Park as safely as possible. This approach will help set the five year pilot project up for success.

In early 2017, Parks Canada selected 16 healthy bison (primarily pregnant two year olds) for transfer to Banff. Prior to transfer, these animals were quarantined for three weeks and underwent health testing to ensure they were free of diseases of concern (e.g., bovine tuberculosis and brucellosis).

In late January, the animals were loaded into shipping containers, custom modified to safely transport bison. They were transported overnight by truck approximately 400 km to the government-owned Ya Ha Tinda Ranch near the border of Banff National Park.

Upon arrival at the ranch, the bison remained in the containers overnight where they were closely monitored by Parks Canada staff. The following morning, the shipping containers were airlifted by helicopter to a “soft-release” pasture in Banff’s Panther Valley. Once released in the pasture, Parks Canada staff will continue to monitor the health of the herd and ensure the new arrivals have access to food and water.

The bison will be kept in the soft release pasture for approx.. 16 months before being released in 2018 to roam freely in the reintroduction zone within Banff National Park.