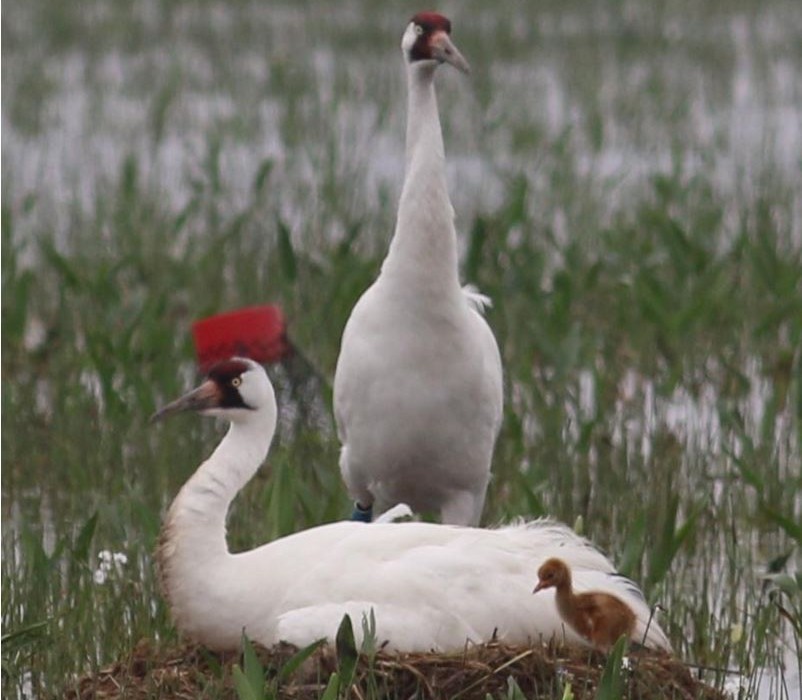 A major milestone was reached this week (April 12, 2016) in the reintroduction of the whooping crane in Louisiana when the first hatching of a chick in the state in more than 75 years occurred in Jefferson Davis Parish.

The hatching, the first seen in Louisiana’s wild since 1939, represents another step forward in the program established in February of 2011 when the Louisiana Department of Wildlife and Fisheries reintroduced whooping cranes back into the state at the White Lake Wetlands Conservation Area in Vermilion Parish.

LDWF has partnered with the U.S. Fish and Wildlife Service, U.S. Geological Survey, and the Louisiana Cooperative Fish and Wildlife Research Unit to return the species to the state. Project funding comes from the LDWF Rockefeller Wildlife Refuge funds, federal funds and private/corporate donations, which are facilitated by the Louisiana Wildlife and Fisheries Foundation. Chevron has been a major corporate donor in the program.

“This is something we’ve been looking forward to and anticipating since the reintroduction began in 2011,’’ said LDWF biologist Sara Zimorski, who leads the Louisiana whooping crane project. “One of the major steps in restoring the species is successful reproduction. We’ve had several pairs nesting the last couple of years but until now no favorable outcomes. It’s an exciting time for us and all of our partners who have worked so hard alongside us. This couldn’t have been done without the assistance of private landowners. The support and cooperation of the many landowners and farmers on whose property the birds spend time is critical to the success of the project.”

The new parents paired earlier this winter and nested and produced eggs for the first time in mid-March. The female, is 4 years old and the male, is just 3 years old.

Once abundant in Louisiana in the 1800s, the species dwindled to two in 1945 and had disappeared by 1950 in the state.

“I’d like to commend and congratulate our hard-working biologists and partners who have shepherded our program so well,’” LDWF Secretary Charlie Melancon said. “The ultimate goal is to establish a self-sustaining whooping crane population in Louisiana so that this beautiful bird can thrive for generations to come. The first chick hatched here is a step in that direction.”

The whooping cranes in Louisiana are designated as a non-essential, experimental population (NEP) under the provisions of the Endangered Species Act. This designation and its implementing regulation were developed to be more compatible with routine human activities in the reintroduction area. The initial cohort of birds received in 2011 marked the first presence of whooping cranes in the wild in Louisiana since 1950.

The White Lake WCA location in Vermilion Parish provides temporary shelter for the birds before their release into the wild. The cranes which make up the Louisiana population were raised at the USGS Patuxent Wildlife Research Center in Laurel, Md., and flown to Louisiana by the Windway Capital Corporation.

Anyone encountering a whooping crane is advised to observe the bird from a distance and to report their sighting to LDWF (http://www.wlf.louisiana.gov/webform/whooping-crane-reporting-form).

Whooping cranes are large-bodied, white birds similar to white ibis, white pelicans, and wood storks, all of which must be distinguished from legally-hunted snow geese. However, a red head and black facial markings along with a height of five feet and a wingspan of 7-8 feet make them very distinctive. In flight, whooping cranes display black wing tips and fully extended neck and legs, which extend well beyond the tail.

Juvenile whooping cranes are primarily white with some cinnamon-brown feathers remaining on their body, primarily on their head and neck. Their wing tips are black like an adult, but they lack the red head.

Anyone witnessing suspicious activity involving harassment or shooting of whooping cranes is advised to report that information to LDWF’s Enforcement Division by calling 1-800-442-2511 or using the tip411 program, which may offer a cash reward for information leading to arrests or convictions. To use the tip411 program, citizens can text LADWF and their tip to 847411 or download the “LADWF Tips” iPhone app from the Apple iTunes store free of charge. Citizen Observer, the tip411 provider, uses technology that removes all identifying information before LDWF receives the text so that LDWF cannot identify the sender.