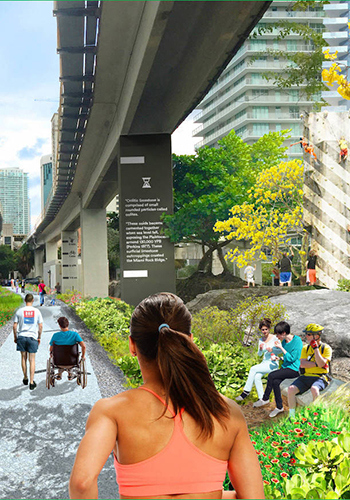 While New York City’s High Line Park sparked an international conversation about how to reuse elevated transportation infrastructure in our cities, planners and designers have become increasingly focused on what lies beneath these elevated highways, subway tracks, and rail lines.

Across the U.S., cities are rethinking these residual spaces, which have long been underused and neglected.

The Underline in Miami, Florida is one such project that seeks to transform the area beneath one of the city’s major elevated transportation systems: the MetroRail. Following a national design competition, James Corner Field Operations, the same firm that designed the High Line, was selected to transform the underused space into “the green spine for a future 250-mile-long network of bicycle and walking trails.”

Beating out 19 other firms in a competition held by Friends of the Underline, Field Operation’s design for the first segment of the Underline, which will be 10 miles long, will be the first transportation corridor in Miami-Dade County to integrate all modes of traffic.

According to Friends of the Underline, “the Underline will connect to downtown and the Miami River Greenway on the north and to the proposed Ludlam Trail and the existing South Dade Trail on the south.”

The Underline will also connect different communities by making improvements that will attract them to the MPath, an off-road shared path for bikers and pedestrians that currently runs beneath the rail line.