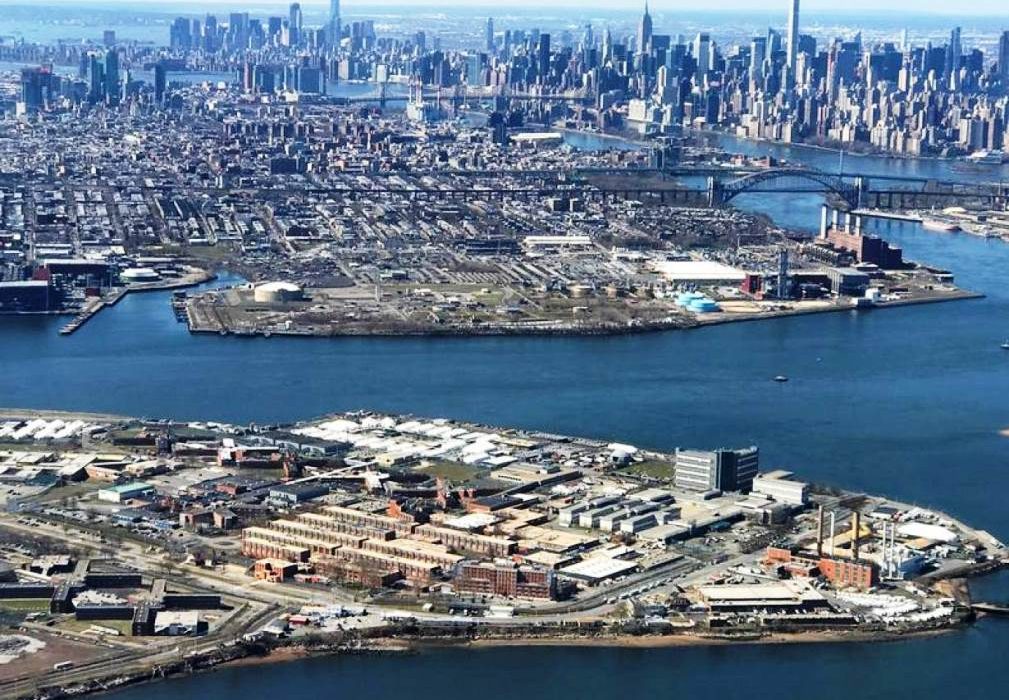 Currently, New York City has an opportunity that’s practically unheard of in modern times: a chance to decide what to do with an island that’s larger than London‘s Hyde Park.

The city voted in October to close down its notoriously overcrowded, violent jail on Rikers Island by 2026, which has in its history held more than twice the number of prisoners it was designed for.

Commanding the most public attention for the island’s future is green industrial use – a renewable energy hub with possibilities of a solar farm, modernized wastewater treatment, and a plant converting organic waste into fuel.

“There’s a lot of momentum for the island as a hub of green infrastructure, “said Moses Gates, vice president for housing and neighborhood planning at the Regional Plan Association, a New York-based urban research group.

“It’s an amazing opportunity and definitely doesn’t come along every day,” he told the Thomson Reuters Foundation.

Mostly landfill and situated just a few hundred feet from the city’s LaGuardia Airport, Rikers Island can be reached by means of a bridge that’s only accessible to people with jail business.

To that end, the City Council, which has a say in deciding the fate of the island, is weighing three pieces of legislation.

One would shift its control to the city’s Department of Environmental Protection from the Department of Correction, and the others call for studying its capacity for renewable energy and battery storage and how much wastewater it could handle from other plants.

Introducing the bills over the summer, Councilman Costa Constantinides, whose district includes Rikers Island, called it “a place of despair for many New Yorkers.”

“These bills are a down payment for a brighter future for this island – one that actually serves New York communities instead of tearing them apart,” he said. 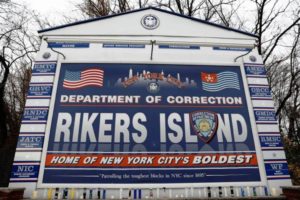 Candles are seen on the sign marking the entrance to the New York City Department of Corrections Rikers Island facility in Queens, in New York, U.S., February 14, 2018. Photo: REUTERS/Shannon Stapleton

Environmentalists note a green use of Rikers Island would help the city meet its target of having at least 1,000 megawatts of solar capacity by 2030, which could power more than 250,000 households, according to New York City officials.

New York state, meanwhile, aims to generate 70% of its electricity from renewable sources by 2030 and by 2040 get all of its electrical power from sources that do not emit planet-warming greenhouse gases.

“It’s turning something that has been bleak, maybe gray and black, into something with a lot of potential for light and green,” said Melissa Iachan, senior staff attorney at New York Lawyers for the Public Interest, a civil rights organization.

The proposals would transform the “literally toxic” island and help “end our addiction to fossil fuel and change the legacy of this island from one of just horror and trauma to one of possibility and clean air and sustainability,” she added.

And opening a wastewater treatment plant on Rikers could allow for the closure of old and out-dated plants elsewhere, said supporters of the island’s green industrial use option.

Putting housing on the island has been suggested but faces obstacles making it largely unfeasible, according to urban planners.

The island has building height restrictions due to the flights going in and out of the airport, and its landfill is decomposing and emits methane gas, said the Council’s Constantinides.

Transport is another hurdle, with the nearest subway stop well over a mile away.

“Without extending some sort of mass transit to Rikers, making it a dense urban environment doesn’t make much sense,” said Mark Ginsberg, an architect whose firm Curtis + Ginsberg has studied possibilities for the island’s future.

Other planners have proposed expanding LaGuardia to the nearby island.

An additional runway could allow larger, longer-haul planes to use the airport, but the proposal has enjoyed little public support.

Not to be overlooked is an acknowledgement of what the island has been since the 1930s, said Brandon Holmes, New York City campaign coordinator for Just LeadershipUSA, an organization aimed at cutting the nation’s jail and prison populations.

Rikers, where most prisoners are awaiting trial or serving sentences of less than one year, was plagued by chronic violence, overcrowding and decayed facilities, said city officials as they voted to close it down.

A goal for the future of Rikers Island is to remember the jail complex and “ensure that the city doesn’t look at this as a blank slate,” said Holmes. “What we want is to make sure the island is never used for profits over people ever again and is something that values and invests in the future of every New Yorker.”

Featured 2017 photo of Rikers island is by Mike Segar/REUTERS.

This article by Ellen Wulfhorst (edited by Zoe Tabary) originally appeared on the website of the Thomson Reuters Foundation, the charitable arm of Thomson Reuters. Reprinted here (with minor edits) by permission.