As in so many American cities in the 1950s and 1960s, highway planners in Syracuse, New York took direct aim at the local African-American neighborhoods in their search for properties they could demolish to make room for the new Interstate highway. As in all the other cases, heartbreak and community devitalization followed. 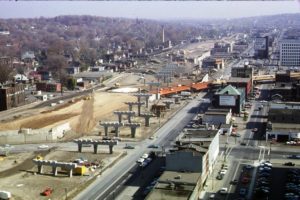 I-81 construction in Syracuse in October, 1966.Photo courtesy of NYDOT.

Now, over half a century later, Syracuse is looking to join the dozens (probably over one hundred) cities worldwide that are seeking—or that have already achieved—revitalization via the expedient of undoing planners’ mistakes.

This fits the statement that I (Storm Cunningham) have been making in my talks and workshops for at least a decade now: “80% of the revitalizing work done by planners (in the urban environment) and civil engineers (in the natural environment) in the 21st century will undo 80% of the work done by their predecessors in the 20th century.”

As a first step in this process, the New York State Department of Transportation recently released a preliminary Draft Design Report/Environmental Impact Statement for the Interstate 81 Viaduct Project that will be subject to public and Federal Highway Administration review and comment prior to being finalized. After a comprehensive review, NYSDOT determined that a community grid alternative will best meet the objectives of the project.

“The Interstate 81 Viaduct Project provides a once-in-a-generation opportunity to enhance safety and mobility through the City of Syracuse, reconnecting neighborhoods, enhancing livability and supporting the economic vitality of the region,” New York State Department of Transportation Region 3 Director David Smith said. “After extensive public outreach and careful consideration, we believe that the Community Grid best meets the project’s objectives.”

The environmental review evaluated a variety of project alternatives, including reconstructing the existing viaduct; dispersing traffic throughout the city through a new community grid; and constructing a new below-grade tunnel for improving an aging section of elevated highway on Interstate 81 in Syracuse between the New York Susquehanna and Western Railway bridge and the Interstate 81/690 interchange.

The comprehensive review also assessed the transportation needs of the project and the social, economic, and environmental effects of various project alternatives. Based on the preliminary Draft Design Report/Environmental Impact Statement, the Community Grid would best address the project purpose and need and therefore would be the Department’s preferred alternative.

To ensure ample opportunity for review and comment, a public information meeting on the document will be scheduled in the near future. Public comments will be taken into consideration as the Department advances the Project.

Featured image (via NYDOT) shows a Community Grid Alternative for I-81 in Syracuse.