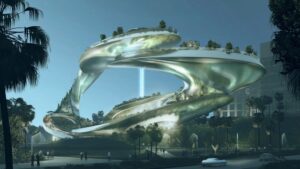 Now, the Shanghai and Taipei-based architects at CROX have designed a conceptual vertical park for San Jose, California.

Dubbed the San Jose Ring, the landmark project takes on a circular shape inspired by architect Lin Congran‘s idea of unity and historical continuity. As the team outlines, the project aims to reconnect people and nature through a huge loop, emphasizing connection through a combination of sculpture, architecture and park space.

Congran says that “San Jose wanted to establish a new image” in the new century, and the design hopes to symbolize a new beginning in the city. With close connections to Silicon Valley, the project was made to be a public artwork and communal space to observe the city and enjoy nature in the vertical park. The project is grounded in ideas of ‘world unity, ecology and global integration’ as it looks to the future of urban parks and land use.” 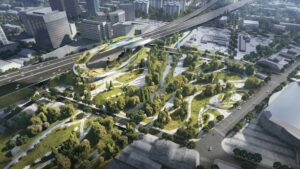 Creating a futuristic vision, the team wanted to reshape the texture of the city with diverse elements. The design looked at the components of forests, lakes, boulders, deserts, and plains to encompasses multiple mixed functions. The program mixes aspects of public and communal spaces like sports fields, theaters, libraries, restaurants, visitor centers, exhibition halls and the like.

Echoing the goal pursued by certified Revitalization & Resilience Facilitators—that of boosting confidence in the future of a place—Congran says that, “what the plan represents is a renewal of the city, transcending regional restrictions and becoming a symbol of global confidence.”

The folks at CROX say this about their submission: “It will be represented as a landmark to integrate the collective social consciousness, a history sign of landmark and the epitome of an era which is similar to the Statue of Liberty and Eiffel Tower. CROX wanted to reflect from the world current situation on separation and alienation, suggesting a reverence for nature and constant estrangement that will stimulate humanity. San Jose Ring has given a second thought on the current situation. 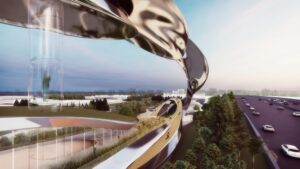 They conclude, “As the architect C.R. LIN proposed the concept of “Hippocampus”: the hippocampus is part of the brain system, it functioned as a storage system for conversation and orientation in long-term memory. The design was scattered in annular space, surrounded by three-dimensional continental blocks, symbolizing a divided world of relationships. Through the circled ring, it echoes to the combination of the world as a whole, awaken the ecological contour of globalization, creating an ecological outline that soothing the interpersonal relationship, regarding as a sustainable existence in history and coexisting with the surrounding alert environment, repositioning the directions for this century, the spirit of this Landmark is ‘Reloading’ ”.

All images courtesy of CROX.