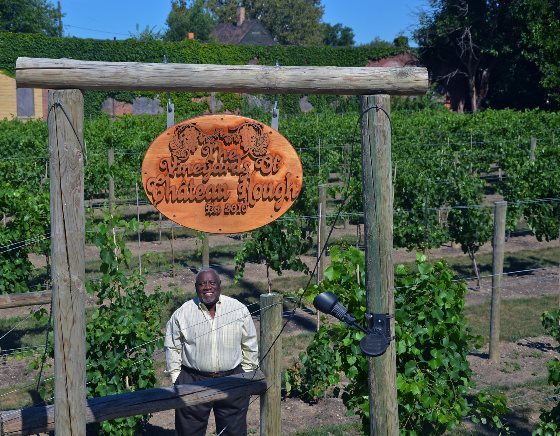 Chateau Hough is one of the first American vineyards set on reclaimed urban land. It’s in the distressed Hough neighborhood of Cleveland, Ohio…on the site of a former crack house, to be exact.

White and prosperous during the 19th and early 20th centuries, Hough became increasingly dense during the Depression as its grand houses were carved up for boarders. Following World War II, blacks from the South moved into the area in large numbers, as did working-class white Clevelanders displaced by highway construction.

Overcrowding and racial tension made bad bedfellows, and on July 18, 1966, just a few blocks east of the vineyard, Hough erupted in riots for six nights, spreading bullets, blood, and flames. Though many residents held on, Hough never recovered, and its name is forever associated with the riots.

Chateau Hough was started in 2010 with a $15,000 grant from the city and about $8,000 of Mansfield Frazier’s own cash. Frazier’s main objectives were to beautify the lot across from his house (hopefully raising its value) and help out parolees, who often have trouble finding work. But he also wanted to see if Cleveland’s most notorious neighborhood could maybe make a pretty damn good wine.

Last spring, the first vintage of Chateau Hough was bottled and auctioned off to help support the vineyard. Frazier talks big about what all his little corner could become: The abandoned library to the west of the vines will house the winery, and a block away, in a decommissioned fire station, Calto and Frazier will build their own wine bar and restaurant, which will employ local youth and formerly incarcerated individuals. Hough today lacks even a single restaurant.