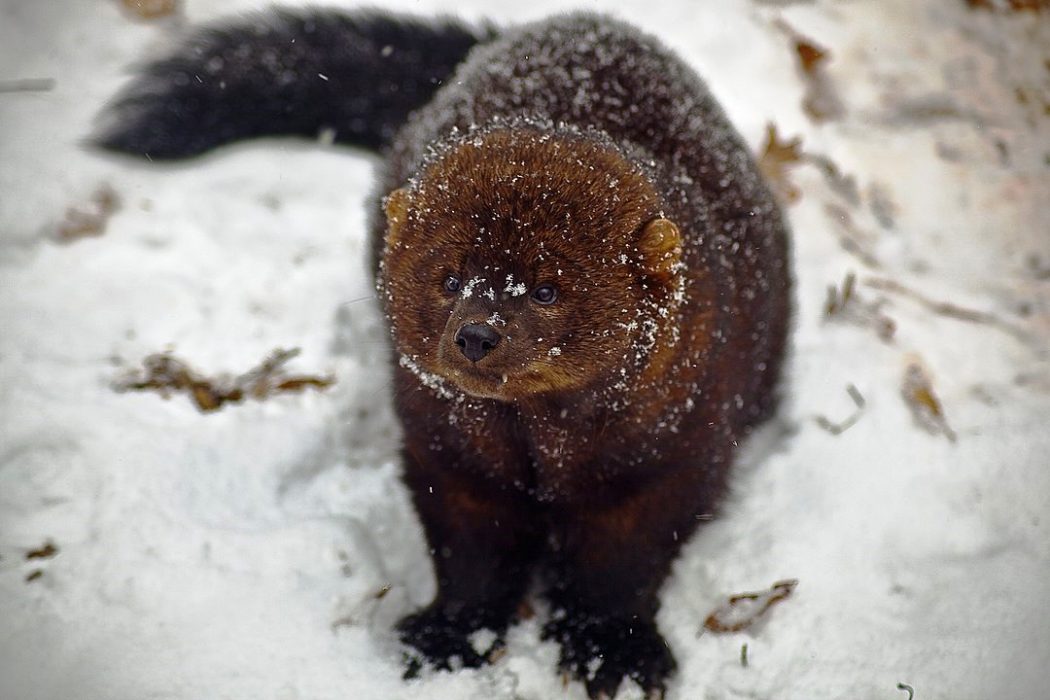 On October 25, 2019, Washington state, federal, and partner biologists released eight fishers in the Mount Baker-Snoqualmie National Forest as part of an effort to restore the species to Washington State. 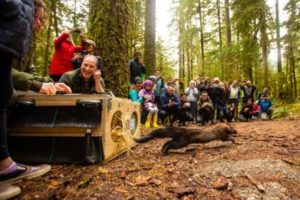 The four female and four male fishers were captured in Alberta, Canada as part of a multi-year project to reintroduce approximately 80 fishers to the North Cascades. They underwent veterinary checkups at the Calgary Zoo and were equipped with radio transmitters to track their movements and population recovery over time.

This latest fisher release is part of an ongoing partnership led by the Washington Department of Fish and Wildlife (WDFW), the National Park Service and Conservation Northwest to restore these elusive carnivores to Washington’s Cascade Mountains and the Olympic Peninsula.

Fishers are a house cat-sized member of the weasel family. They were eliminated from Washington by the mid-1900s as a result of both over-trapping and habitat loss, and are listed as Endangered by the state of Washington.

Fishers are related to wolverines and otters and are native to the forests of Washington, including the Cascade mountain range. Fishers prey on various smaller mammals—mountain beavers, squirrels and snowshoe hares—and fishers are one of the few predators of porcupines. 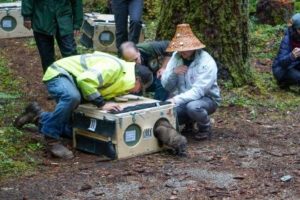 “Fishers are vulnerable, and we are working alongside partners, demonstrating creativity and persistence together to bring them back,” said Kelly Susewind, WDFW Director. “Fisher restoration is a great example of how we work at this agency.”

“Watching the fishers return to their native forests of North Cascades after a long absence has been inspiring,” said Karen Taylor-Goodrich, North Cascades National Park Service Complex Superintendent. “The work just is not possible without the distinctive partnership between the federal government, Washington Department of Fish and Wildlife and conservation organizations like Conservation Northwest and The Calgary Zoo.”

In addition to the releases in the North Cascades, fisher have been reintroduced in recent years on the Olympic Peninsula and near Mount Rainier in the South Cascades.

“Fisher reintroduction has been a model collaboration; a public-private partnership that has grown to include local communities, Indigenous nations, forestry and others,” said Mitch Friedman, Executive Director of Conservation Northwest. “Everyone is pleased, except perhaps the porcupines and hares. It’s inspiring to see more of these charismatic creatures returned to the Cascades, and exciting to consider the possibilities that collaborative conservation holds for Washington’s natural heritage.”

Conservation Northwest has coordinated work with trappers in Alberta to humanely acquire fishers for release, which are then health-screened and housed by The Calgary Zoo. The non-profit also supports fisher monitoring with volunteers and remote cameras through its Citizen Wildlife Monitoring Project. 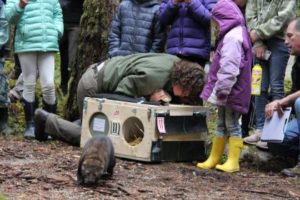 Fishers have been released in the North and South Cascades and on the Olympic Peninsula. Other release locations have included Gifford Pinchot National Forest and Mount Rainier National Park. Monitoring efforts show released animals have demonstrated signs of establishing themselves throughout the Olympic Peninsula and the southern Cascades, and that they have begun to reproduce.

Re-establishing viable populations of fishers in the Olympic and Cascade Mountains are important steps to down-listing the species in Washington State. The state recovery plan and implementation plan for fisher reintroduction in the Cascades can be found here.

This work is supported by trappers, local native American tribes, and international partners like the Calgary Zoo and Canadian First Nations.

“As one of Canada’s leading conservation charities, the Calgary Zoo is thrilled to bring our internationally recognized expertise in reintroduction science to such an important conservation initiative,” said Dr. Clement Lanthier, president & CEO of the Calgary Zoo.

“Reintroductions are one of the best tools we have in the fight against species loss and seeing these strong and healthy Alberta carnivores released into pristine forest habitat, is very rewarding,” she added.

Featured photo of fisher in the snow courtesy of Forest Wander.