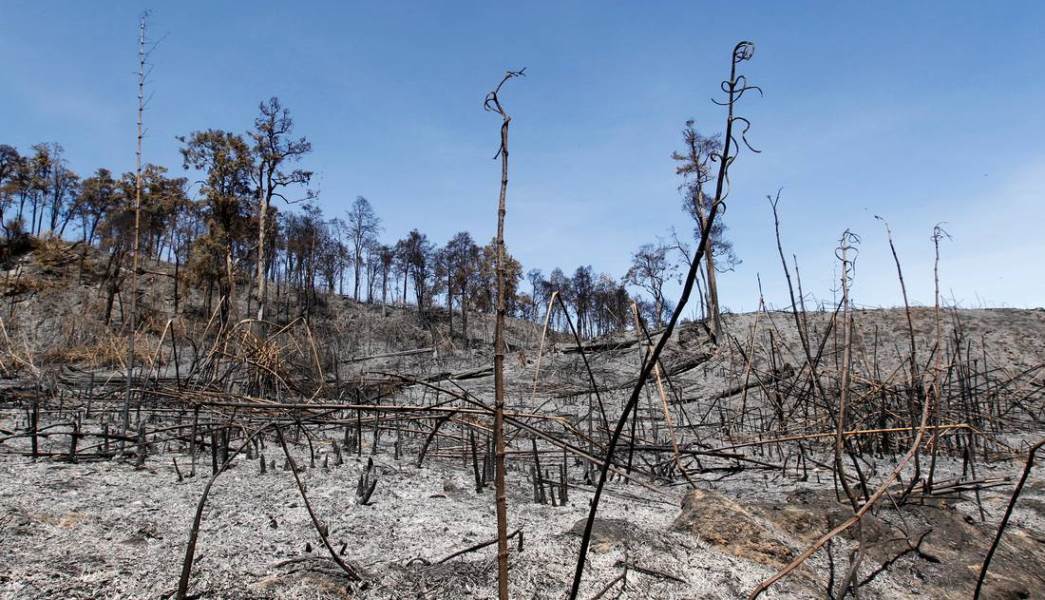 From South Africa, where unprecedented floods this month washed away farmland, to the excessive logging of Kenya‘s mountain forests, Africa is fast losing healthy land, putting millions of people at risk of hunger and losing their homes and incomes.

Factors such as climate change, over-grazing, excessive cultivation, deforestation and urbanization have left up to 40% of the planet’s land degraded – affecting half of humanity, a report by the United Nations‘ anti-desertification agency said recently.

And worse is yet to come, including for countries in sub-Saharan Africa, the report warned.

But it is not too late to curb land degradation and restore dry land to fertile forests, the report added, citing a plethora of initiatives from Burkina Faso to Malawi that are working.

Here are some facts from the U.N. Convention to Combat Desertification (UNCCD) report and what it means for Africa.

What are the main causes of land degradation?

Land degradation – a persistent decline or loss of soil, water or biodiversity – is caused by a number of factors.

These range from deforestation to overuse of pesticides and fertilizers in farming, as well as climate change, which is bringing more frequent and extreme weather.

For example, unprecedented rainfall on South Africa’s eastern coast this month sparked flash floods that washed away crops and triggered sinkholes and mudslides, destroying hundreds of houses, buildings and roads and killing more than 430 people.

In Kenya’s mountain forests – known as the country’s “water towers” – logging for timber, charcoal and agricultural expansion has cut water flows in rivers, limiting irrigation for farmland among other impacts.

What are the impacts of land degradation?

The loss of healthy land gives rise to food insecurity, and forest loss can make communities more vulnerable to weather-related disasters such as drought, floods and wildfires.

As land is damaged and crop yields fall, many communities become trapped in a downward spiral of poverty that leads to more land degradation and worsening water scarcity.

Roughly $44 trillion of economic output – more than half of global annual GDP – is at risk from land degradation, the UN report noted.

Land degradation is also a major driver of climate change, with tropical deforestation alone contributing about 10% of all human-created greenhouse gas emissions. Soil degradation also leads to the release of carbon stored underground.

What could happen to the planet’s land by 2050?

If current trends continue, by 2050 an additional 16 million square kilometers (6.2 million square miles) of land – the size of South America – will be degraded, the report projects.

Almost 15% of agricultural land, pasture and natural areas could also see a long-term decline in productivity, with sub-Saharan Africa the worst affected.

Can degraded land be restored?

Land degradation can be reversed through activities ranging from agroforestry – planting trees amid crops – to better grazing management, the report said.

If 35% of global land is restored, crop yields could increase by up to 10% by 2050, with the largest gains in the Middle East and North Africa, Latin America, and sub-Saharan Africa.

That could help hold the line on rising food prices and feed the world’s growing population.

“I don’t think we’ve got a lot of options when it comes to (improving) soil health… Not taking action will be risking lives in the future,” said Muchaonyerwa, a professor of soil science at the University of KwaZulu-Natal.

Does food production need to be greener?

Food systems require a major overhaul, from how food, animal feed and other commodities are produced to the supply chains that connect producers to consumers, the report said.

Growing single crops on a large scale, running industrial livestock operations, and destroying forests and other ecosystems are what drive the bulk of greenhouse gas emissions associated with food and commodity production, it said.

“Modern agriculture has altered the face of the planet more than any other human activity,” said Ibrahim Thiaw, head of the Bonn-based UNCCD, in a statement.

“We need to urgently rethink our global food systems, which are responsible for 80% of deforestation, 70% of freshwater use, and (are) the single greatest cause of terrestrial biodiversity loss,” he continued.

In Burkina Faso, the construction of stone bunds, known as diguettes, hold back rainwater and let it soak into the soil rather than run off, improving food security and reversing desertification.

And in Kenya, drones are being deployed to help farmers better track pests and diseases and avoid over-using chemicals – a change that has boosted yields by nearly half on some farms.

This article by Nita Bhalla @nitabhalla and Kim Harrisberg (edited by Laurie Goering) originally appeared on the website of the Thomson Reuters Foundation. Reprinted here (with minor edits) by permission.