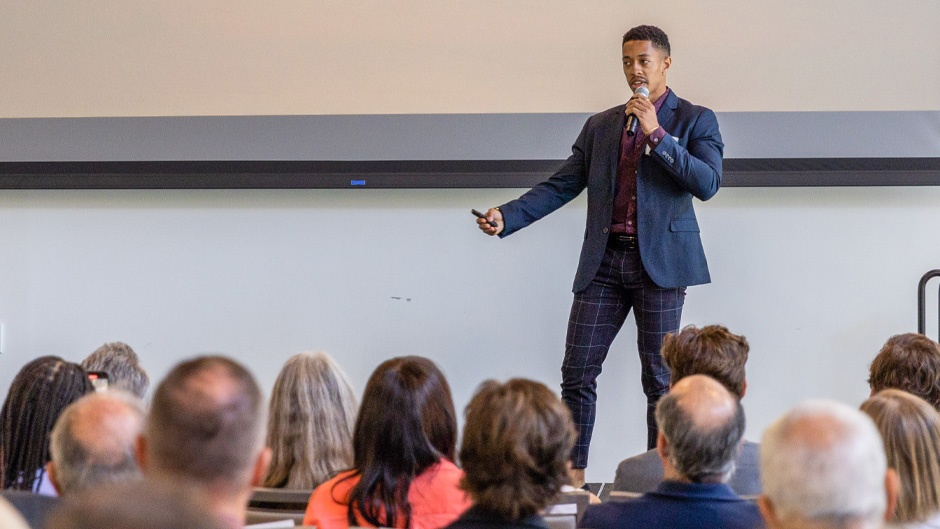 Did you know that extreme heat kills more humans than any other climate or weather threat in the United States?

New research headed by Nkosi Muse, a third-year Ph.D. student in the University of Miami‘s Rosenstiel School of Marine, Atmospheric, and Earth Science, investigated just how much people are exposed to extreme heat in Atlanta and what’s being done to address it by the local government.

Exposure to extreme heat can affect the body and mind. This can result in heat stress or exhaustion, and in severe cases heat stroke, which may lead to death.

Muse, a Somerset, New Jersey, native who has spent the past three years studying climate hazards, particularly in predominantly Black and brown communities, said his research topic was inspired after reading the book “The Color of Law” and learning how for decades, discriminatory residential practices in the U.S. have disproportionally exposed certain communities to different climate hazards than others.

Besides providing shade from direct sunlight under layers of branches and leaves, trees also cool the local environment through a process called evapotranspiration. Muse also studied how municipal climate resilience policy and planning can help provide better resources and outcomes for those in need.

“This paper that I recently published highlights the urban heat island in Atlanta, which exists in most cities throughout the United States and the world,” said Muse. “I found that the urban tree canopy in Atlanta, that’s been there for years, is one of the largest in the country. But unfortunately it is under threat because developers want that land.”

Normally, when urban development takes place, it reduces grasslands, vegetation, and forests and is replaced by impervious surfaces that absorb higher amounts of radiation during periods of intense sunlight. Muse reasons why this cannot continue to happen in his recent published paper.

“This has led me to wonder how I can help to create a more equitable landscape when it comes to climate adaptation,” added Muse, who aspires to be a top science advisor in the U.S. one day. “We need to make sure that we have just as many trees and green spaces in Liberty City and Little Haiti, as we do in Coral Gables or today’s Coconut Grove.”

Muse, who sits on the Climate Resilience Committee for the City of Miami, said it’s important to him to amplify the voices of underrepresented communities. He encourages Miami residents to get involved with local nonprofit or non-governmental organizations such as Catalyst Miami, The CLEO Institute, the Miami Climate Alliance, or the Smile Trust to help educate themselves in the fight against climate change and to protect themselves from climate dangers.

“It’s a tricky battle though because you can’t tell an individual person to try to stop climate change, because it’s not just on them,” he explained. “Putting pressure on your commissioners and public officials is key because climate change is something that is going to affect all of us and the more you speak up, the more our elected officials are forced to make decisions on it.”

Katharine Mach, associate professor of environmental science and policy at the Rosenstiel School, is Muse’s faculty advisor and mentor. She said she is impressed with Muse’s efforts in the weather and climate field—from his first author publication to being a key player in representing vulnerable communities in the City of Miami.

“He’s a very determined, even-keeled person who is a phenomenal public speaker who is really active in representing the school at all sorts of events,” said Mach, referring to his recent TED Talk-style speech at the University’s Climate Resilience Academy symposium, where he exhibited his work on heat exposure.

“His level of being able to articulate the science and connect audiences is very unique and something I think that you can’t train,” concluded Mach.

She also noted his unique ability to take hard science and put it in terms that don’t assume jargon.

Photo of Nkosi Muse courtesy of the University of Miami.