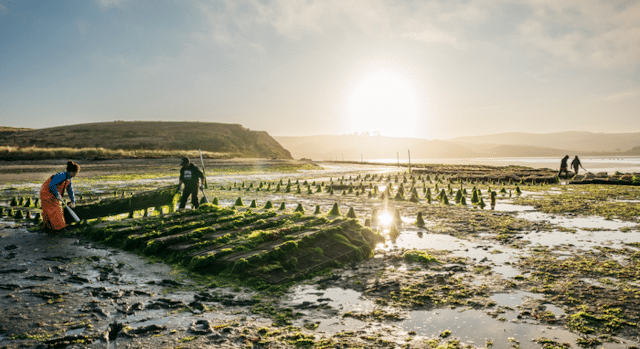 As I (Storm Cunningham) have been advocating for over two decades in my books, talks and workshops, shellfish and seaweed farming are two of the most important forms of regenerative agriculture. They go far beyond sustainability, actually cleansing and restoring water quality with every harvest.

That regenerative nature is due to two key characteristics: 1) they don’t need be externally fed: all the nutrition they need is taken from the ambient water; and 2) harvesting them exports those nutrients from the marine (or aquatic) ecosystem. This is as opposed to environmentally disastrous finfish farms, like salmon.

Because of its proximity to the ocean, Californians get to enjoy locally sourced oysters, mussels, abalone and clams. Most of the shellfish consumed there come from aquaculture and mariculture farms along the coast; from San Diego in the south to Humboldt County in the north.

And because the animals are filter feeders that siphon tiny plankton out of seawater, growing them is both environmentally sustainable and restorative.

But, due to rising greenhouse gas emissions, the ocean has become more acidic, conditions hostile to shellfish growth.

“There have been calls across the state and across the U.S. to increase aquaculture output because it’s so sustainable. But then at the same time, it’s a very vulnerable industry,” said Melissa Ward, a postdoctoral fellow at San Diego State University.

In a new study, SDSU and Oregon State University researchers interviewed California shellfish growers to find out how they perceive ocean acidification, and to learn what strategies they think will help their operations adapt to changing environmental conditions.

“This study is fairly unique in that we’re getting information directly from the people who are being affected by change and learning directly from their experiences,” said geographer Arielle Levine, director of the sustainability program in SDSU’s College of Arts and Letters.

Ward added, “They’re on the front lines of observing climate change and they also are going to be most well-suited to describe what they think they need to adapt to those changes.”

Growing threat Burning coal, oil and natural gas emits carbon dioxide and other greenhouse gases into the atmosphere. About a third of that CO2 is absorbed by the ocean, reducing pH levels.

As the water becomes more acidic, the calcium carbonate shellfish need for their shells is less abundant.

“And so they’re basically running out of building blocks to build shell with,” said Ward. “And that can be particularly challenging for a very very small shellfish that’s just forming.”

Most shellfish are spawned in land-based hatcheries. When they’re about the size of a fingernail, they’re moved to floating nurseries in the ocean.

“And at that point, they’re just sort of subjected to whatever conditions and whatever food floats by in the water,” said Ward.

If the water is acidic, the baby shellfish may grow more slowly, or even die, making it harder for aquaculture farms to remain viable.

Strategies for adaptation Interviews with shellfish growers revealed that while they are concerned about the impact of ocean acidification on their operations, they often lack the scientific instrumentation to know when it’s happening.

Growers also worry about other environmental threats such as warmer water, heavy rainfall and pollution—which all contribute to the spread of marine diseases—as well as toxic algal blooms.

“Sometimes, growers would lose 90, 100% of their shellfish in a given area, and they won’t really know why,” said Ward.

“It’s sort of a story of multiple stressors; you can imagine a time when the water is particularly warm or there’s a rainfall event, and ultimately you may reach a tipping point that the shellfish in the water just can’t remain resilient to,” she explained.

Many growers said they need access to scientific resources to pinpoint the environmental factors involved in large die-off events, and to potentially prevent them.

Policy change All of the shellfish growers felt regulatory and permitting requirements for shellfish operations need to be adjusted to respond to the rapidly changing environment.

For example, it might be wise to diversify a shellfish operation by growing a new species better adapted to ocean acidification. But obtaining the required permits for that can be onerous.

“California is likely the hardest state to get a permit for shellfish aquaculture, which is seemingly at odds with the messaging that’s coming down from the top,” Ward said. While state leaders recognize shellfish aquaculture is sustainable and an opportunity for economic growth, it can take years and hundreds of thousands of dollars for a grower to obtain a permit for a new species.

“And they just can’t afford that time and money,” she added. “We need to maintain the environmental protections that we have in California, but if we really want the industry to be resilient to environmental change, we have to kind of allow for flexibility in farm management.”

Another adaptive strategy identified by shellfish growers was a need for more networking opportunities—not only with other growers, but also with managers, scientists and policymakers—to share information and best practices for adapting to environmental change.

“This work really draws a connection between environmental change that’s happening and will continue to happen, and how that’s not just affecting the species in the ocean, but also the people who rely on these species,” concluded Levine.

The study is published in the journal Ocean & Coastal Management. The researchers hope it will serve as a roadmap for improving the resilience of the aquaculture industry in California.

Photo of California oyster farmers in Tomales Bay is by Remy Hale.