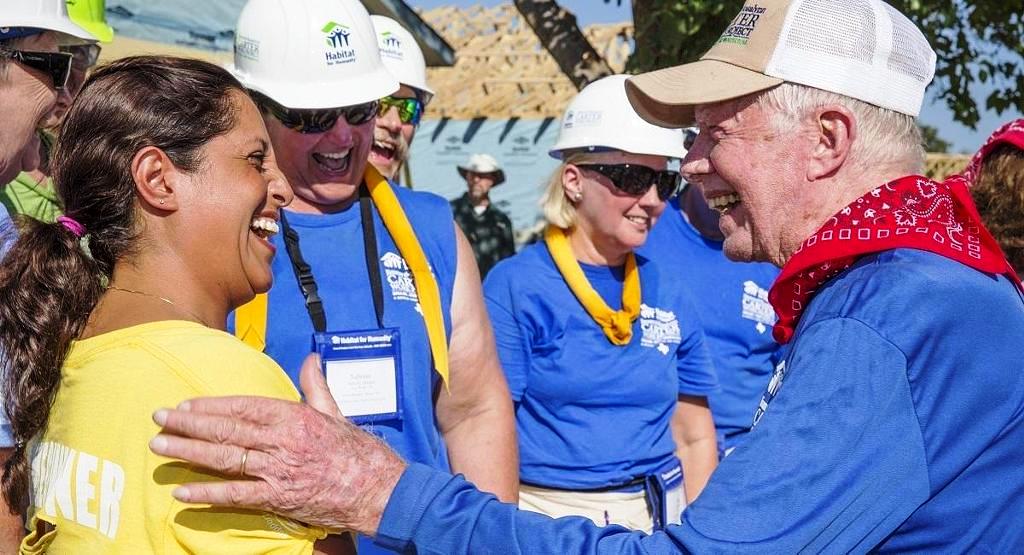 One of Habitat for Humanity’s first national partners was DuPont, whose support of the affordable housing rehabilitation / construction non-profit was started in 1983 by the company’s Performance Building Solutions. DuPont regularly provides significant volunteer support and donates energy-efficient building products for renovations and community rebuilds, which have helped Habitat for Humanity serve more than 22 million people through such projects worldwide.

In October of 2019, DuPont brought its recently announced renewed corporate partnership with Habitat for Humanity to life with dozens of DuPont employees participating in key building and neighborhood revitalization projects across the U.S.

As a testament to the company’s ongoing commitment to creating healthy environments for people to live, work and play, DuPont participated in this year’s 36th annual Jimmy & Rosalynn Carter Work Project. On October 6, 2019, 17 DuPont employees, in addition to hundreds of Habitat for Humanity volunteers from across the world, joined former President Jimmy Carter and First Lady Rosalynn Carter in the north Nashville, Tennessee neighborhood of Park Preserve to build 21 affordable homes in one of the city’s five affordable housing communities.

Volunteers worked alongside Trisha Yearwood and Garth Brooks, Nashville locals and longtime Habitat volunteers, who have joined the Carters’ mission. Since 1984, President and Mrs. Carter have become tireless advocates, active fundraisers, and some of the most hands-on construction volunteers, renovating and repairing 4331 homes total.

Another place that DuPont’s employees and materials help revitalize is Midland, Michigan. Hosted by Midland County Habitat for Humanity, each year the annual Neighborhood Revitalization event empowers residents and homeowners to revive their own neighborhoods to enhance their quality of life. With more than 275 homes reconstructed over the last 10 years, the effort focuses on three main areas: Home Preservation, Critical Home Repair and Weatherization.

As part of this year’s Neighborhood Revitalization (August 2-9, 2019), 15 houses were repaired with roof repair and replacement, driveway removal and replacement, gutter work, screen door replacement, painting and landscaping, amongst other projects.

In addition to large community builds like Carter Work Project, DuPont also recently supported Habitat for Humanity’s Home Builders Blitz, which brings together professional homebuilders from all over the U.S. every year for one shared purpose—to build, repair and revitalize safe and affordable housing for communities in need of a decent place to call home.

As a 2019 Silver sponsor, DuPont employees participated in this year’s annual weeklong project where thousands of professional homebuilders volunteered across the nation, working alongside Habitat homeowners.

Photo of former President Jimmy Carter with Habitat volunteers in Nashville courtesy of Habitat for Humanity.