The half million people who live in the area along Vietnam’s Tam Giang Lagoon, Southeast Asia’s largest, have been buffeted in recent decades by flooding from the sea, rivers, and heavy rainfall.

In the province, climate change and rapid urbanization have caused particularly unpredictable flooding in Hue, the capital, which is a UNESCO World Heritage Site. 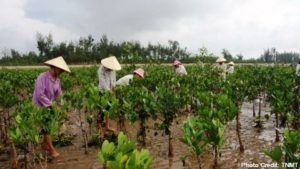 Planting mangroves in the lagoons reduces the impacts of flooding on people and properties by breaking wind and waves. It also provides better habitat for aquatic species, leading to better and more sustainable livelihood for local people. Finally, it increases carbon storage and water purification for aquaculture.

In the urban area of Hue, garbage in waterways was making flood season worse.

The Huong River Waterkeeper has been working with the Centre for Social Research and Development in Vietnam, the University of Potsdam in Germany, and Vrije Universiteit in the Netherlands on a program that trains women in the sustainable management and restoration of both mangrove ecosystems and urban water bodies.

The program, ResilNam, has planted more than 13,000 mangrove seedlings around the Tam Giang Lagoons and is addressing restoration, conservation, and sustainable management of natural retention and drainage areas in Hue city.

At the beginning of both projects, Huong River Waterkeeper surveyed 1,100 people in both the Hue area and the rural area around the lagoon to hear the public’s opinions about use of natural resources, their environmental perception, and their overall happiness.

The survey examined the risk perceptions, the current status of the communities, and past flood experience. The organization also conducted seven focus groups with both urban and rural residents about the resources around their communities, the threats from flood to their resources, and the ecosystem services.

More than 700 women participated in the events, and third- and fourth-year students in the geology and geography programs at Hue Science College received training.