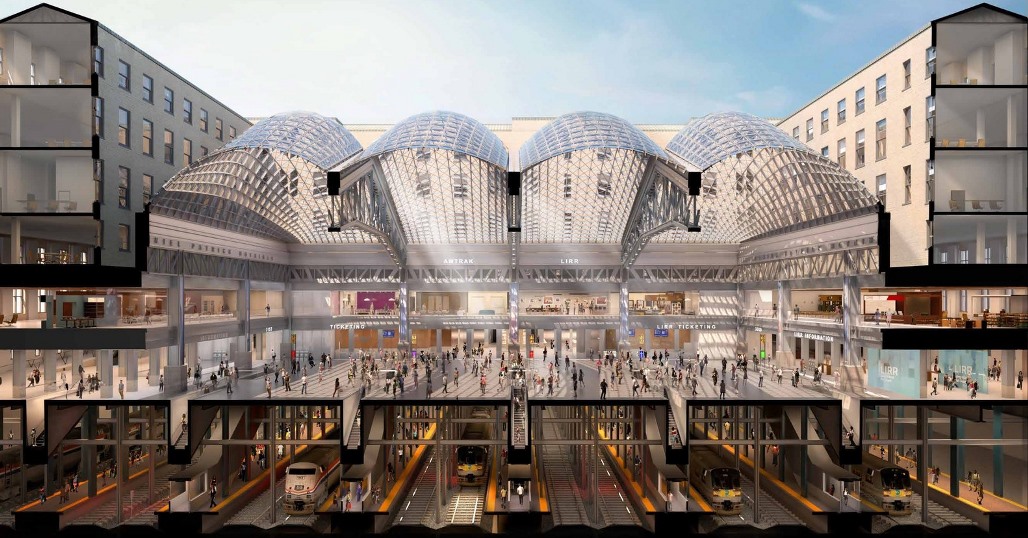 On August 17, 2017, New York Governor Andrew M. Cuomo announced the start of major construction of the Moynihan Train Hall, which is being renovated and redeveloped in to a world-class transportation hub for the 21st century.

Congressman Jerrold Nadler said, “Today’s announcement is a major step in realizing Senator Moynihan’s bold vision of a grand rail gateway into New York City. I am convinced that Moynihan Station is just the sort of infrastructure improvement and economic development that New York and our nation needs. In addition to generating thousands of good jobs, Moynihan Station will bring our aging infrastructure into the 21st Century and expand our capacity for passengers and make New York-in particular, the West Side of Manhattan-more accessible to commuters and visitors.” 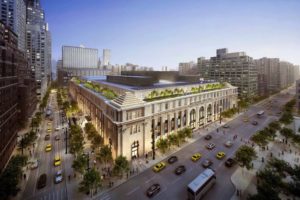 The Farley Building redevelopment, which is integrated into the Moynihan Train Hall, will create a new 255,000-square-foot Train Hall for Long Island Rail Road and Amtrak passengers and increase total concourse floor space in the Pennsylvania Station-Farley Complex by more than 50 percent.

The Farley Building will also house 700,000 square feet of new commercial, retail and dining space within the mixed-use facility and create an iconic civic space for Manhattan’s West Side.

“For decades, passengers were promised a world-class train hall worthy of New York – today, we are delivering on that promise and turning that dream into a reality,” said Governor Cuomo. “We are transforming the Farley Post Office into a state-of-the-art transit hub to get travelers where they need to go faster and more comfortably. With better access to trains and subways, vibrant retail and business opportunities and stunning architectural design, we are bringing Penn Station into the 21st century.”

The Governor also announced the completion of the first significant milestone in the construction of the transformative Penn-Farley Complex, which he first announced in September of 2016. Workers have now finished demolishing the former sorting room floor slab. This accomplishment – five months ahead of schedule – will enable Related Companies, Vornado Realty LP, and Skanska USA, the developer-builder team, to begin full construction of the train hall, including the one-acre skylight.

Amtrak co-CEO Wick Moorman said, “We applaud Governor Cuomo for his leadership in advancing construction on the Moynihan Train Hall. The new Train Hall will provide a modern new concourse for Amtrak and Long Island Rail Road passengers, funded in part by a $105 million contribution from Amtrak. Along with Amtrak’s infrastructure renewal and concourse improvements at Penn Station, this is another significant milestone is the effort to create a better customer experience for passengers in New York.” 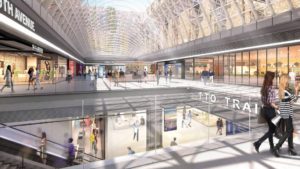 Since September 2016, significant progress has been made to prepare the James A. Farley Post Office building for this dramatic transformation. To date, Skanska has removed more than one acre of concrete and steel flooring to increase the vertical space underneath Moynihan Train Hall’s future skylight. This process entailed the demolition of 6,000 tons of concrete and the removal of approximately 800 tons of steel, as well as an additional 400 tons of hazardous materials. Skanska has also made significant progress in the interior demolition of all five floors of the Farley Building.

The Farley Building was designed by McKim, Mead and White as a sister to their masterpiece – the original Pennsylvania Station. Five decades after the loss of the original structure, the Moynihan Train Hall will once again provide New Yorkers a grand entrance in a McKim, Mead and White architectural marvel. The Farley Building’s train hall will bear the name of one of its great champions – the late Senator Daniel Patrick Moynihan.

Senator Marisol Alcantara said, “After decades of stagnation and delay, New Yorkers are finally bearing witness to the revival of the Farley building into a train hall truly worthy of this great city. This state-of-the-art transformation will turn the new Moynihan Train Hall into a world-class gateway to Manhattan – offering locals and tourists alike a truly spectacular look into New York City, whether it is their first time visiting or they are simply commuting to work.”

The Farley Building’s Moynihan Train Hall will feature a new, spectacular 92-foot high skylight that will rest upon the building’s historic and architecturally-dramatic steel trusses.

All LIRR and Amtrak trains will be served by the nine platforms and 17 tracks that will be accessible from the Train Hall, serviced by eleven escalators and seven elevators. The Train Hall will provide a direct connection to the Eighth Avenue Subway and create direct access to the train station from 9th Avenue for the first time, bringing unparalleled regional transportation options within convenient reach of the booming Hudson Yards and Far West Side areas.

In addition to the demolition and removal of existing materials, work has begun on many new features of the Penn-Farley Complex, including:

Senator Brad Hoylman declared, “…this monumental project…will be an enormous benefit for commuters, and a significant boost to the city’s economy.”

The Moynihan Train Hall is part of the $2.5 billion transformation of the Pennsylvania Station-Farley Complex announced by Governor Cuomo in January 2016 to dramatically modernize, upgrade and redesign America’s busiest transit hub into a world-class facility for the 21st century. The complex also includes a comprehensive redesign of the LIRR’s existing 33rd Street concourse at Penn Station and an extensive renovation to the adjacent Seventh and Eighth Avenue subway stations. 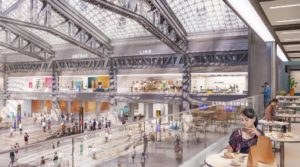 The plan will include nearly tripling the width of the 33rd Street Corridor, which is among the busiest sections of Penn Station and stretches along the station’s lower level from Seventh to Eighth Avenue. Other improvements include upgraded lighting and wayfinding and digital screens to convey information and create a modern passenger experience.

David Greenbaum, President of the New York Division of Vornado Realty Trust said, “The transformation of the historic Farley Building into the majestic Moynihan Train Hall will demonstrate, like its predecessor Grand Central, the power of a grand public space.  The restored historic building will become a must-see attraction for any visit to New York.”

All image courtesy of the New York State Governor’s Office.