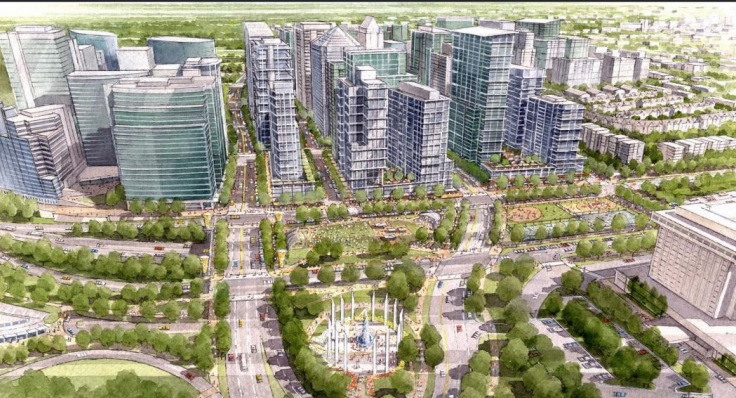 On March 12, 2016, the Arlington County (Virginia) Board approved a plan to redevelop a major block in the Rosslyn neighborhood.

The development would also bring to the largely concrete, asphalt and glass Rosslyn a 1-acre public park that developers say would be suitable for live music performances and a children’s playground. The park also would include a lawn area. ^^^^^^^^^^^^^^^^^^ Note from Storm: I live in Arlington County, which is know nationwide as an example of good growth practices. Most of this reputation rests on two factors. The first was the decision decades ago to use the then-new Orange line of the Metro system to create a necklace of neighborhoods around each of the stations. This concentrated residential and commercial growth in transit-access areas, thus reducing traffic and preserving older neighborhoods. The second reason for Arlington’s good reputation was that it was the first county in the U.S. to require all new public buildings to be LEED certified.

Any visitor to the nation’s capital knows that, if you look west from the National Mall, you’ll see a tall urban skyline. That’s the Rosslyn area of Arlington, and it stands as a monument to some of the worst urban design and planning in the country. Little by little, this dysfunction, disconnected mess is being redesigned and revitalized. Some of the ugly, low-rise buildings from the 60s and 70s (the Dark Ages of architecture) are about to be demolished, and a superblock is being broken up to reconnect the place. It’s overdue, but I’m happy it’s happening.

Strangely enough, this otherwise-well-planned country is home to another of America’s urban planning disasters: the Crystal City area. It too, is gradually being redesigned and made more livable.