The city of Xi’an is the capital of Shaanxi province in China, located in the center of the Guanzhong Plain of Northwestern China.

One of the oldest cities in China, Xi’an is the oldest of the Four Great Ancient Capitals, having held the position under several of the most important dynasties in Chinese history. Xi’an is the starting point of the Silk Road, and home to the famed Terracotta Army of Emperor Qin Shi Huang.

After a long period of decline, Xi’an has re-emerged as an important cultural, industrial and educational centre of the central-northwest region since the 1990s. It boasts facilities for research and development, national security and China’s space exploration program. 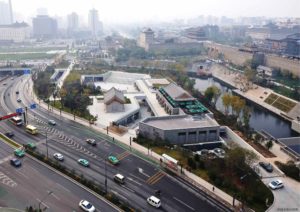 With all of this growth and redevelopment, no one would be surprised to learn that its historic buildings and sites have come under pressure, sometimes from the wrecking ball. But a recent project found a way to both restore a historic site and revitalize one of the gateways to the city.

The Xi’an South Gate Plaza is located in the middle of the medial axis of Xi’an, which starts from Zhangjiapu Square in the north and ends at the TV tower in the south, crossing The Bell Tower. This axis strings together numerous cultural relics of the Han, Tang, Ming and Qing dynasties with modern times. 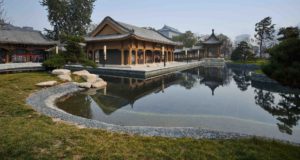 It’s also the core area and an important node of Xi’an culture, tourism, commerce and transportation. In recent years, with the social progress and economic development, the South Gate Plaza area has gradually displayed numerous problems: disorganized traffic, a dilapidated public square, poor accessibility from outside the plaza, and a chaotic visual environment that doesn’t compliment the many historic landmarks.

Now, the China Northwest Architecture Design and Research Institute has come to the rescue with a renovation project designed make South Gate greener, as well as more beautiful, accessible, and functional. It will do all of this while protecting existing cultural relics resources, enhancing the regional environmental quality, and restoring the ancient building. 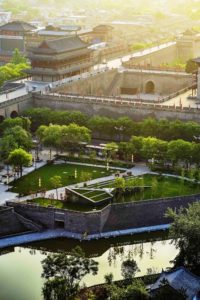 The underground space is being enhanced with additional parking to reduce unsightly surface parking, and will connec tot a new east-west underground pedestrian channel. This successfully separates the pedestrians from drivers, thus pleasing both.

Below, the architects describe the three key sections of the project in their own (translated) words:

The Song Garden plot: We retain the original antique-style buildings; organize new constructions in the form of setback to echo the existing surroundings. The terrestrial landscape coordinate with the preserved traditional architectural figure ground.

Also, by restoring and renovating the pool with night lighting and elevation variation, we set free underground space as greening effectively. The basement of one floor is mainly formed by management and commercial service space, basement two is mostly functionedas equipment space and underground parking lots. Meanwhile, underground buildings set up a rich spatial network using series of sunken courtyards and streets. 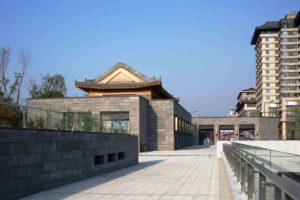 The Miao Garden plot: The sunken central square connects the whole base; ground buildings locate in the northeast corner of the site in the shape of setback, forming a space limit for the city gate.

Landscape design relies on the rich height difference of the terrain, plus the artistic flows of water, to achieve a multi-layered green system and thus create a people-oriented, transformational landscape. In this plot, Basement One primarily functions as commercial service space, while Basement Two mostly comprises equipment space and underground parking lots, supplemented by a small number of commercial service facilities.

Close to the south city wall on both sides, the demolition of the original Huancheng Park management office and other chaotic temporary buildings make room for our further design. We set pair of glass curtain wall service facilities under the principle of minimalism, nestled in the woods, to meet the functional needs without affecting the overall appearance of ancient city wall. 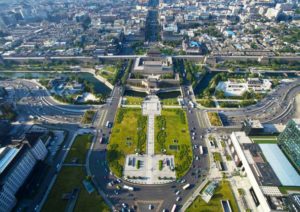 South Gate block: We extend original pedestrian tunnel from the South Main Street to the inner plaza of the South Gate. Through this technique, we try to guide the pedestrian into the South Gate area in order to achieve a three-dimensional separation of people and vehicle flow. Along the channel, we layout public toilets, equipment spaces, housing management rooms and other supporting space.

Thanks to this reconstruction, the South Gate Plaza—with its focus on the historic city wall—now highlights the profound cultural connotation of Xi’an. It creates a harmonious atmosphere between humans and nature.

The South Gate Plaza has become an important carrier for the comprehensive development of modern city, as the living room of this ancient capital city: Xi’an.

All images courtesy of Chen Su.