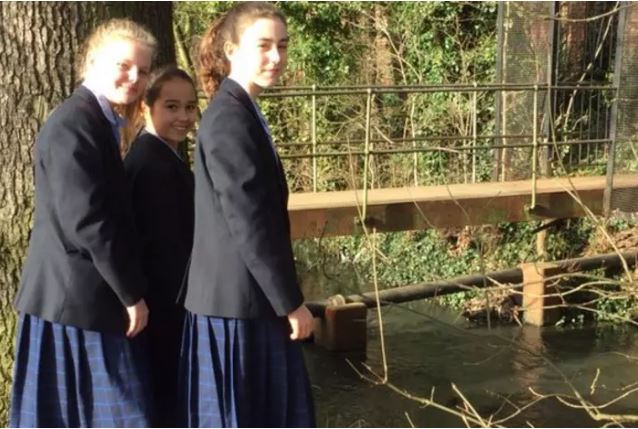 The River Went is a river in Yorkshire, England. It rises close to Featherstone and flows eastward, joining the River Don at Reedholme Common.

A project to increase the diversity of West Yorkshire’s fish and invertebrate waterway populations, and help Ackworth School pupils learn about the natural environment, started in February of 2017.

The youngsters will work alongside the Environment Agency, Wild Trout Trust, and the Yorkshire Wildlife Trust to restore the natural sequence of deeper pools and shallow areas along a 500-metre stretch of the River Went, where it passes the school.

This essential wildlife habitat no longer exists in that section, due to the river’s having been artificially widened and straightened by civil engineers. But that was only the most recent of human assaults on the River Went’s health. 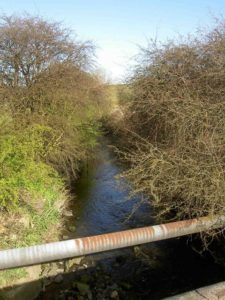 River Went near Thorpe Audlin in 2009. Photo by Steve F. via Wikipedia.

During the late 1800s and early 1900s, the river was seriously polluted as a result of coal mining and the growth of population to support the mining operations. In many cases, villages developed around the mines and had inadequate or no sewage treatment plants, while the mines discharged mine water containing ochre, and large quantities of solids, which were deposited on the bed and choked vegetation. As a result, the fish population was almost entirely destroyed, and the river remained without fish until the 1970s.

The state of the River Don was similarly lifeless, but by the 1970s, water quality in the lower Went was slightly improved, as a result of natural purification of the effluents being added to the river, and a small population of fish re-established itself. Most are thought to have been swept down the Don from still waters much higher up than the mouth of the Went, but they survived the transit downstream to take refuge in the Went.

As water quality continued to improve, the fish became self-sustaining by the 1980s, and populations of roach, bream, perch and eels began to spread upstream. While these species were suited to the ponded nature of the river below Sykehouse, the river above there is faster flowing, and more suitable for riverine species of fish such as chub and dace. There was no chance of natural redevelopment of these species, as they had all been eliminated by the pollution.

In order to overcome this problem, the Yorkshire Water Authority Fisheries department searched for a source of chub and dace which could be re-introduced. An isolated population was eventually found on the River Ouse where Bishop Dyke joins it at Cawood. They were netted, and in 1981, over 2,000 young chub and dace were released into the river at Askern, below the A19 road bridge.

The operation was a success, as the fish colonized the river upstream and downstream from the release point, and soon became self-sustaining. As a consequence, the Went is now an excellent coarse fishery. There are also populations of chub and dace in the Don near Doncaster, which are believed to have originated from the Went.

See article in the Pontefract and Castleford Express.