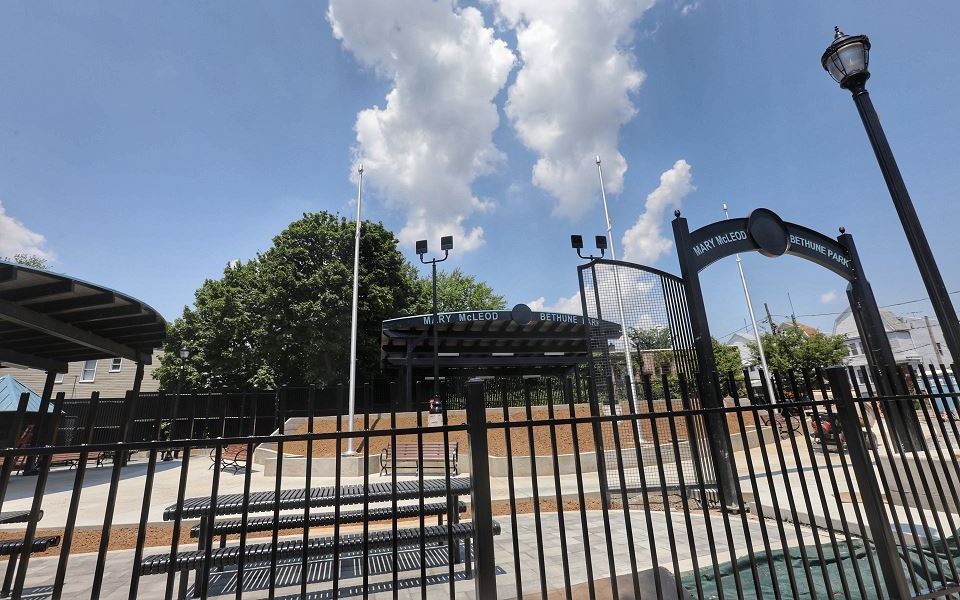 After decades of talk and little action to move the project forward, the new park will repurpose, renew and reconnect (the reliable 3Re Strategy for revitalization) this underutilized property to boosst the quality of life of its neighborhood.

It’s now open to the public and is widely utilized by neighborhood residents, the Bethune Community Center across the street as well as by residents and workers in the surrounding Jackson Hill business district. 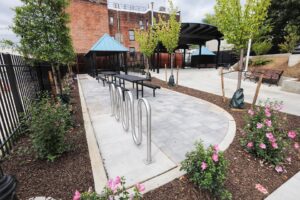 “After years of planning, I’m proud that we finally found a way to transform this underutilized space into a usable park for Ward F families and the nearby Bethune Center,” said Councilman Robinson. “I knew that for a new park to succeed, it would have to be strongly connected to the activities at the Bethune Center. Now we have another outdoor space in Ward F where residents can come together to play, exercise, gather with friends, and watch local artists perform.”

The entire park design process was highly collaborative with the local community, Jackson Hill Special Improvement District (SID), and City Council members directly involved. Throughout the park, numerous elements incorporate the legacy of Mary McLeod Bethune for this community and the city at large.

“Already this year, two dozen parks citywide have been renovated and upgraded through the Open Space Trust Act, which we implemented in 2016. Bethune Park is a great addition to the City’s open space and parks infrastructure, and will especially benefit the local residents by providing a unique outdoor space and recreational activities for kids of all ages,” said Mira Prinz-Arey, Ward B Councilwoman and Open Space Trust Committee Chairperson.

The $3.5 million park, funded by Community Development Block Grant and capital funding, includes an amphitheater/concert stage, open-air pavilion, shaded seating area, gaming tables, a playground, and exercise equipment. The park will be used for recreation, celebrations, farmers’ markets, and other community events. A new parking lot with electric vehicle charging stations was also built nearby to preserve the existing supply of parking. 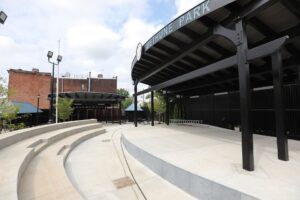 “The new park brings the Bethune Center full-circle. Bethune Park is unique because it is specifically designed to reflect the cultural, educational, and wellness activities that take place daily within the Center. These were also the guiding principles of the great civil rights activist for whom the park is named after,” said Alvin Pettit, Bethune Center Director. “Every detail was meticulously thought out to achieve the best design possible for an outdoor space of this size. I am proud to say that the Bethune Center is no longer just a facility, but is now a designated central area of enjoyment for the surrounding community and all of Jersey City.”

The new Bethune Park is an incredible asset and addition for the community and an additional element for the Bethune Center. The Community Center will hold many classes and performances that use this park as an outdoor space for music concerts, yoga sessions, physical fitness classes, poetry readings, art lessons, among other family and community programming.

“This is an exciting time for Jersey City parks. We can already envision how this versatile space will become a new performance destination for local artists, musicians, and small businesses to showcase their talents. The JCPC strongly believes that the presence of nature and green spaces in urban neighborhoods have long-term positive health and well-being for all residents. We’re pleased to know that the community can experience both nature and active play at one location,” said Paula Mahayosnand, President of the Jersey City Parks Coalition.

The Fulop Administration continues to focus on the direct needs of Jersey City’s dynamic neighborhoods, which is especially evident in Bergen-Lafayette, where more has been invested into the area’s revitalization than any other administration in decades.

“We’ve seen the need for outdoor recreation in urban areas grow exponentially, especially throughout the COVID-19 pandemic, and this newest park will serve as a valued extension of the Bethune Center to allow for more outdoor entertainment and children’s programming,” said Mayor Fulop. “After being stalled for decades, we were able to work with the community to get this park built, and it can now serve as an incredible asset and addition for the entire community.”

A nine-foot-tall bronze monument honoring civil rights leader Mary McLeod Bethune will be added to the new Bethune Park upon its completion in the upcoming months. The statue of the monumental figure will be placed at the park’s main entrance as a focal point of the new park and also with the intention to spark curiosity amongst viewers to engage further into her legacy.

All photos are courtesy of the Office of Mayor Fulop.