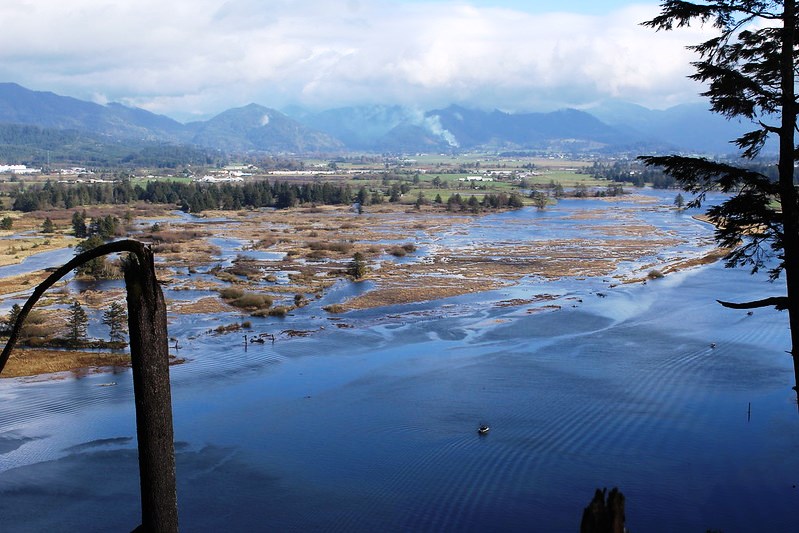 “This study provides strong evidence that ecosystem restoration is beneficial to communities as well as the environment,” said Steven Dundas, the report’s co-author and an environmental and resource economist in Oregon State University’s College of Agricultural Sciences and the Coastal Oregon Marine Experiment Station in Newport. “The positive impact on housing values near the restored site alone likely justifies the investment in this project.”

The report’s lead author is Graham Shaw, who recently completed his master’s degree in marine resource management at OSU. The Tillamook Estuaries Partnership and the National Oceanic and Atmospheric Administration’s Restoration Center, two of the partners in the restoration project, commissioned the economic impact report.

The primary aim of the wetlands restoration was to reduce severe and disruptive flooding in the city of Tillamook and on U.S. Highway 101 as well as improve habitat for salmon, some species of which are considered threatened or endangered. NOAA and the Federal Emergency Management Agency were the primary funders of the project.

The goal of the new report was to better understand the breadth of economic benefits a tidal restoration project might produce, said Lauren Senkyr, a biologist with the NOAA Restoration Center.

“This kind of information helps us to be able to talk about the community benefits of restoration projects,” Senkyr said. “Projects like this have ripple effects. Not only do they help the fish, they also help people.”

A concurrent NOAA economic impact analysis showed that during the four years the restoration work was underway, the project supported 108 jobs and $14.6 million in total economic output for the state of Oregon.

Shaw worked with Dundas to identify and quantify additional socioeconomic benefits of the project. They reviewed data from before and after the restoration, made comparisons to spot changes and conducted an analysis of the housing market to identify changes to home values near the restoration area.

“The restoration project created a large area for increased recreation that wasn’t there before,” Shaw said. “It wasn’t accessible for people in the community the way it is now.”

Anecdotally, the project so far is meeting its intended goals of improving salmon habit and reducing flooding risk. Since the restoration project was completed, Tillamook has only experienced two minor, five-year flooding events, and in both cases, the flooding was less severe than previous similar floods.

“In both cases, the amount of flooding was 9 inches less than previous floods. It took two to three hours longer for the city to flood and the floodwaters receded two to three hours sooner than it would have previously,” said Kristi Foster, executive director of the Tillamook Estuary Partnership.

More study is needed to better understand the impacts of the restoration project over time, the researchers said. They also suggest engaging in socioeconomic analysis work early in a project, rather than waiting until the project is complete.

“There were some challenges associated with trying to study the socioeconomic changes after the fact,” Dundas said. “Starting earlier in the process would allow researchers to collect more before-and-after data and better understand people’s perceptions about the value of a project in advance.”