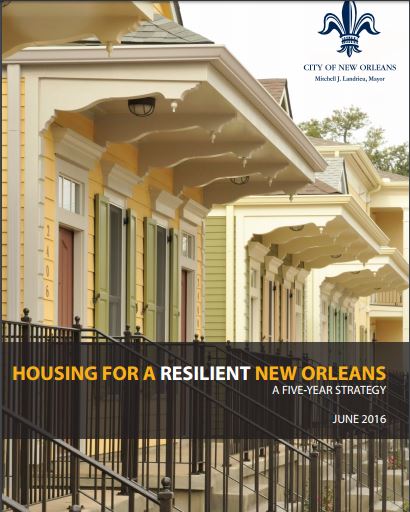 The City of New Orleans, Louisiana has published a 5-year strategy for increasing resilience by preserving and increasing 7500 units of affordable housing.

Housing for a Resilient New Orleans presents an integrated housing framework that harnesses the growing strength of our local economy and confronts the challenge of providing affordable housing choices for all New Orleans residents. It is a deliberate approach with new policies and tools that will address both new and long-standing challenges so everyone can participate in the City’s growing prosperity.

This strategy transforms a broad vision into clear actions that will result in a more resilient New Orleans with vibrant neighborhoods and more affordable housing.

These actions are guided by the following core principles:

First, housing costs in New Orleans rose by about 50 percent since 2000.4 Demand for rental housing also increased within New Orleans, creating pressure on the city’s rental market. Notably, because of our significant job growth, New Orleans is an increasingly popular place to live. Simultaneously, some residents – those who returned to New Orleans following Hurricane Katrina, families who lost wealth during the 2008 Recession, and demographic groups like Millennials – are deferring homeownership due in part to higher home values. At the same time, fewer public resources due to federal and state budget cuts, coupled with loss of “income-affordable” units, low-wage jobs, and inadequate transportation options, have limited housing options.

Together, these conditions have forced many New Orleanians to spend a high percentage of their monthly income on housing and other essential needs. Housing insecurity – when households pay more than 50 percent of their income on housing costs – disproportionately affects renters, African-Americans, and low-income New Orleanians at higher rates than other populations.

That is why we launched the Network for Economic Opportunity, which connects disadvantaged jobseekers and businesses to new opportunities.

That’s why we passed HireNOLA, which requires contractors demonstrate at least one-third of all work hours on projects are being completed by local workers.

We must ensure that working people do not get priced out of New Orleans – they are the backbone of our City. The only way our entire community improves is if we all move forward together.

Through this plan, we will build or preserve 7,500 affordable housing units by 2021 (4,000 units by 2018 and another 3,500 units by 2021). New Orleans is for everyone. It needs to be, or else it stops being New Orleans. In Housing for a Resilient New Orleans, we have designed a new approach so no one is left behind and everyone has a place in this precious City we call home.