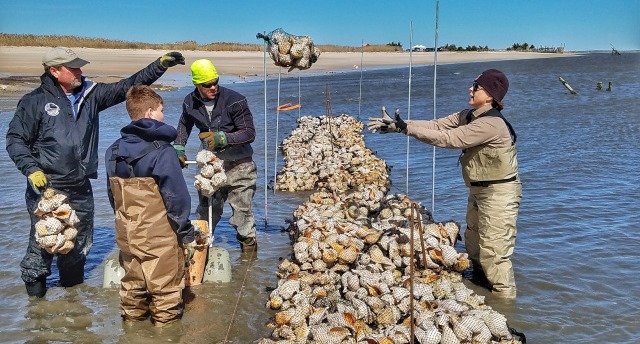 In 2012, Hurricane Sandy’s powerful westerly winds caused a storm surge so strong it stripped the sand right off most of the beaches on the New Jersey side of Delaware Bay. The sand was washed into adjacent marshes, exposing large sections of peat and leaving the sand well above high-tide line.

In the storm’s aftermath, conservation groups rallied together with community and state leaders, local biologists, and local contractors to deal with the environmental damage.

“It was a crisis response; we were racing against a firm deadline of the horseshoe crabs arriving on the beach,” said Tim Dillingham, executive director of the American Littoral Society (ALS). “But we were also intent on rebuilding habitats along Delaware Bay in order to strengthen the ecology, communities, and economy of that area. We set out to build partnerships and relationships that would invest everyone in working for a healthy and resilient Delaware Bay.”

The immediate concern was that nearly 70 percent of horseshoe crab beach habitat was destroyed and its loss imperiled not only the horseshoe crabs that spawn there, but also shorebirds like the Federally listed red knot, which stop on those beaches each spring to feed on crab eggs before flying to their nesting grounds in the Canadian Arctic. The birds and crabs help fuel a multi-million-dollar annual ecotourism industry in New Jersey’s Bayshore region.

“The horseshoe crabs can’t lay eggs on these beaches because the exposed sediment is anoxic [devoid of oxygen]. If the crabs were to lay eggs here, they would just die,” said local biologist Larry Niles. “In just one day, these very important beaches went from highly suitable to unusable.” 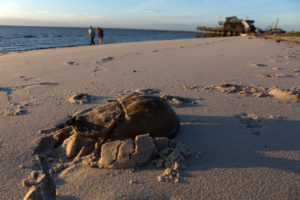 A horseshoe crab on the sand at Reeds Beach. Photo credit: Steve Droter

Within days after the storm had passed, just over a mile of damaged horseshoe crab beach habitat was restored. With further funding from the U.S. Fish & Wildlife Service (USFS) and the National Fish and Wildlife Foundation, the team was able to continue efforts and by 2017 had restored eight Delaware Bay beaches to their pre-Sandy footprints by bringing in more than 200,000 cubic yards of coarse-grained sand and removing 2,000 tons of rubble. The team also designed and constructed five inter-tidal oyster reefs to keep the sand on the beach, while beginning work to restore portions of the marsh behind those beaches.

“No one seemed to care about [Reeds] beach before,” said local resident Harry Bailey. “Storms came and destroyed the beaches, and no one came to fix it. These organizations came in; now the beach is built up, the horseshoe crabs are back, and birders from all over the world come here to see the birds.”

“The economy of Cape May County is so heavily tourism dependent, and more and more people come to the bay because of the scenic beauty and the wildlife,” said Cape May-Lewes Ferry Marketing Manager Michal Porch. “It’s in our best interest to maintain the economy and peoples’ jobs by protecting and preserving the environment.”

For the construction companies involved, millions of dollars of the grant funding went directly to them and further stimulated local businesses indirectly.

“It’s what drives our economy down here,” said JR Heun of H4 Enterprises. “Without the tourism, the infrastructure wouldn’t be there for us to have our workload.”

However, this restoration may mean more to the bay communities, the residents, the businesses, and the economy of the bay than simply protecting streams of revenue.

“Our restoration did not just restore the ecologic resource value for birds and crabs, but it also restored Bay-wide faith and hope. In the face of despair, the Bay community saw it had not been forgotten and people’s lives could be restored and even improved,” said Captain Al Modjeski, Habitat Restoration Program director for the American Littoral Society.

As part of the restoration, the Society began a paid U.S. Military Veteran Intern Program, where local veterans were hired to help with the restoration work and monitoring.

That program “has given me something to do and I’m learning as I’m doing it, so I’m enjoying it tremendously,” said U.S. Army Veteran William Anderson, regarding his internship. 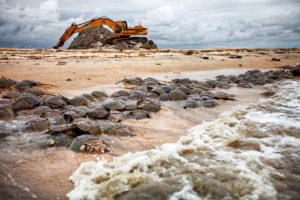 The Society also held Local Leader Focus Groups to engage surrounding municipalities and community events like annual Shell-a-Brations, where hundreds of volunteers were involved in constructing the oyster reefs at restored beaches.

Tying together all of those other efforts were yearly Veteran’s Day on the Bay gatherings, where the reefs were named to honor U.S. military veterans and the resolve of the Bay community to persevere against all odds.

“I think it’s very important that with this project, these organizations are helping both veterans and youth as well as educating people about the environment and how important it is to take care of it,” said former mayor of Middle Township Tim Donohue. “It’s good to get kids and families involved in the project to understand the significance of the Bay.”

Though it has been only five years since the storm, the Society and its partners hope to continue to holistically restore the Bay, and thereby help create even more sustainable and resilient natural and human-built communities that are informed by events of the past in order to be better prepared for the future.