Farmer Peter Morrison drained the lake to grow hay. Starting in 1894, Morrison and hired laborers, who used horses to dig canals that totaled 10 miles (16 km) in length. Within weeks of the canals being finished, the lake had completely drained, except for a small portion now known as Shelley Lake. The primary drainage canal is now misnamed Saltese Creek. 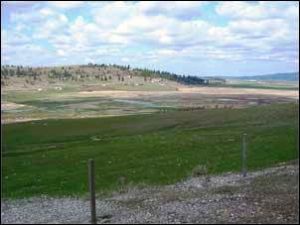 The Spokane County Environmental Services (SCES) are working hard to undo this ecological tragedy. Their primary goal is to restore the wetlands habitat, and increase late summer water flow into the Spokane River.

This, in turn, will help restore salmon and other native fish. One farmer’s extra profit damaged the income of many other people hundreds of miles away who relied on the fisheries. Thus, the need for wetland protection regulations.

As part of the project, SCES purchased three parcels on the Flats, totaling 600 acres. These 3 parcels make up the land area called “Option B” during the completed feasibility study. We believe that restored wetlands in that area will provide benefits in several ways including:

But the county isn’t doing this on their own. They’ve been planning the restoration for almost a decade. Now, a partnership with the Central Valley School District is accelerating the project, while adding educational opportunities and recreational use to it. It will include multiuse trails, a bird habitat, viewing areas and an interpretive center with an auditorium, classrooms and meeting space.

Private landowners are part of the partnership, as well. Bud Morrison—a descendant of the man who drained the lake—operates and lives on a cattle ranch in the Saltese Flats. He sold over 300 acres to Spokane County in 2010 for the restoration project, with an agreement to build an interpretive center to honor of his mother, Doris, a former school teacher.

The Doris Morrison Interpretive Center will include an exhibit area to provide views of the Saltese Flats and showcase history of the Morrison family, which homesteaded the land in the 1890s.

Featured photo of the Saltese Flats restoration work by Howpper via Wikipedia.

See article by Amy Edelen in The Spokesman-Review.