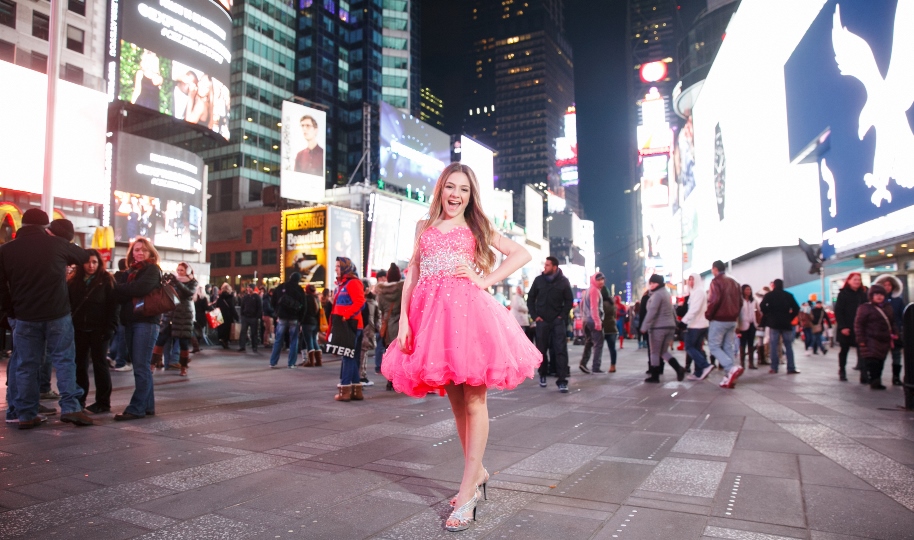 In 2009, Janette Sadik-Khan, former New York City Transportation Commissioner and co-author of the new book “Streetfight: A Handbook for an Urban Revolution,” proposed closing Broadway to cars from 42nd St. to 47th St. and turning it into a quarter-mile-long pedestrian plaza. 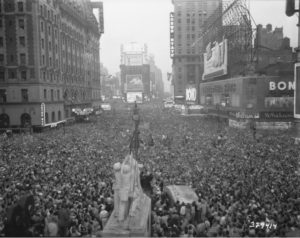 As the head of the city’s Department of Transportation from 2007 to 2013, Sadik-Khan oversaw the repurposing of 220 acres of space, taking away lanes from cars and giving them to pedestrians, bikes and buses. “It started just with some traffic cones and some beach chairs, and it’s really become a model for other cities to try things out. You can reimagine them, test it, measure it,” she said.

During her tenure as Transportation Commissioner, Sadik-Khan also helped introduce the city’s bike share program, Citi Bike, funded in part by Citibank and Mastercard. It was used over 26 million times in its first three years. New York City streets now have 400 miles of bike lanes, with more than 30 miles separated from vehicle traffic by a lane of parked cars, an idea Sadik-Khan copied after seeing it in Copenhagen, Denmark.

In 2010, architectural firm Snøhetta was selected to design a $55 million pedestrian-friendly renovation of Times Square in midtown Manhattan, New York.

On April 19, 2017, the Times Square Alliance, Councilmembers Daniel Garodnick and Corey Johnson, the NYC Department of Transportation, the Department of Design and Construction, and Snøhetta celebrated the grand opening of the Times Square pedestrian plazas with the announcement of new and enhanced programming for the spaces. The new plazas and extended sidewalks add 110,000-square-feet of new pedestrian space to Times Square, transforming the area from one of New York’s most notoriously congested spaces into a radically open civic square. 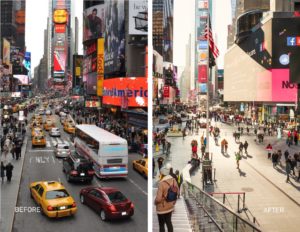 To take advantage of these new public spaces, and add to the excitement and vibrancy of Times Square, the Times Square Alliance has developed a programming plan including arts, music, entertainment, food, and more – which will enliven the area for the hundreds of thousands of people that pass through the plazas daily.

“These completed plazas, and our plans for them, will allow Times Square to be a hub that captures and celebrates New York City’s culture, in every sense of that word: our artistic and creative culture, our popular culture, and our diverse cultures,” said Tim Tompkins, President of the Times Square Alliance. “We want these plazas to be a place by, of and for New Yorkers, that we can then share proudly with the rest of the world.”

“Times Square will always be the Crossroads of the World, and today’s announcement cements its position as one of the greatest public spaces in the City of New York,” said Council Member Dan Garodnick. “110,000 square feet of pedestrian plazas goes a long way towards creating a more open, vibrant, and safe Times Square for both visitors and New Yorkers alike.” 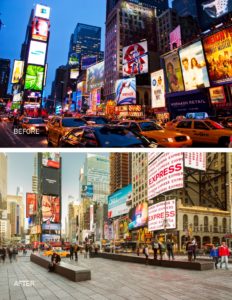 “With the opening of these plazas, the most iconic destination in the world is going to be even more vibrant, more activated and more accommodating than ever,” said Council Member Corey Johnson. “With arts and entertainment, food markets and activities from yoga to interactive exhibitions, the new Times Square really has something for everybody. I’m so thrilled with the incredible work that’s gone into activating and improving this space, and I thank Tim Tompkins, his team at the Times Square Alliance and my fellow elected officials for all of their outstanding efforts.”

“Times Square’s transformation into a pedestrian plaza made it an amazing, special place – but it needed ground rules and investment to turn an innovative pilot into a mature public space,” said Manhattan Borough President Gale A. Brewer. “It’s thrilling to see that investment come to fruition. Thanks to the Times Square Alliance, the administration, and my colleagues Councilmembers Dan Garodnick and Corey Johnson, we have made Times Square a lasting public plaza that should be exciting and safe for years to come.”

“Conceived as a project whose success would be measured not only by its new aesthetic but also the long-term physical, psychological and economic benefits on its community, the reinvention of Times Square stands as a model for how the design of our urban landscapes can improve health and well-being of its users while providing an important stage for public gathering,” said Craig Dykers, Architect and Founding Partner of Snøhetta. 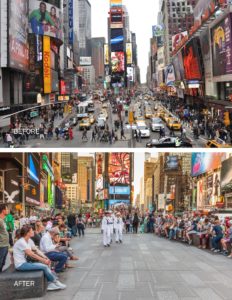 “With a growing business district and tens of thousands of creative professionals working in this area, it is only natural to create a space reflective of the community for everyone to enjoy,” said Luis Sanchez, Manhattan Borough Commissioner, New York City Department of Transportation. “This plaza’s redesign and amenities are a great reflection of what make this city unique and one of the greatest in the world.”

“The redesign of Times Square was from the ground up and completely rebuilt the infrastructure in the area, adding to the new pedestrian plazas electrical access and other conveniences that make it easier to stage live performances and events,” said Department of Design and Construction Commissioner Feniosky Peña-Mora. “This project is a major element of the history of Times Square, the most iconic pedestrian plaza in the world, and we are very pleased with the public’s reaction to the expanded space and new features.”

“When people think of New York City, Times Square is one of the first places that comes to mind, and this new pedestrian plaza helps bring the neighborhood together,” said Gregg Bishop, Commissioner of the NYC Department of Small Business Services. “Vibrant, active public spaces strengthen our communities and make them a real destination. We are proud to partner with the Times Square Alliance and support what is truly world-renowned work.”

“This grand re-opening and expansion of the Times Square Plazas and the announcement of new programming provide a perfect moment to step back and take a look at how much New York has accomplished in the effort to create livable streets for people, in the nation’s most pedestrian-dense city,” said Paul Steely White, Executive Director of Transportation Alternatives. “We thank Mayor de Blasio and DOT Commissioner Trottenberg for standing firm and continuing the transformation of our public spaces, especially this iconic location, and the Times Square Alliance for working to realize what it so aptly describes as a ‘radically open civic square.’” 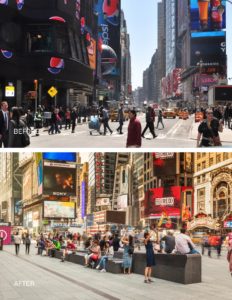 “Our public plazas provide the perfect stage upon which we can share and celebrate our city’s artistic creativity, and Local 802 is glad to partner with Times Square Alliance this spring and summer to showcase the virtuosity and energy that Broadway musicians bring to the area every day,” said Tino Gagliardi, President, Local 802 American Federation of Musicians. “By using musicians from Broadway, New Yorkers and visitors in Times Square will hear performers who come from across the globe and play music of all styles and techniques – a fact that is emblematic of the district’s status as the Crossroads of the World. We are thrilled that these live musical performances will be done under a contract that guarantees fair pay and treatment of musicians, and we thank the Times Square Alliance for helping to bring the magic of live music to the streets of Times Square.”

Following the closure of Broadway to car traffic in 2009, Snøhetta’s design for the permanent pedestrian plazas cleared out decades of old infrastructure cluttering the square while creating a unified ground plane from building front to building front. Ten 50-foot long granite benches that allow pedestrians to move through the area more comfortably, complementing the energy of the lights and excitement above. Since completion in 2016, the reconstruction has doubled the amount of pedestrian-only space at Manhattan’s core.

The project site, known as the “Bowtie,” forms the heart of the Times Square Theater District, and is bounded by Broadway and 7th Avenue between 42nd and 47th streets. Since the Bloomberg administration closed Broadway to vehicles in May 2009, and the first of Snøhetta’s pedestrian plazas opened to the public in spring 2014, the transformation has already had a significant impact on public safety, economic output, and user experience. Pedestrian injuries have decreased by 40%, vehicular accidents have decreased by 15%, and overall crime in the area decreased 20%. And with the removal of vehicles, air pollution in the Bowtie area has fallen by as much as 60%, making the space safer and healthier for everyone. Over 80% over visitors now agree that the pedestrian plazas make Times Square feel safer. 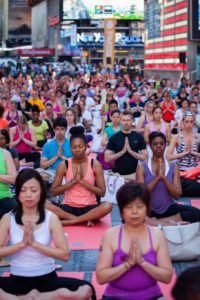 Understanding the magnitude of these crowds and patterns of movement was fundamental to creating a successful new life for one of the most iconic public spaces in the world. Situated between Port Authority Bus Terminal on the west and Grand Central Station on the east, it functions as one of the key gateways to New York City: On average, 330,000 people move through Times Square every day. Accordingly, the five new plazas were designed to accommodate multiple speeds of pedestrian circulation with subtle design gestures that empower people to move in a natural, comfortable way through the space.

Snøhetta’s design is inspired by Times Square’s past and its rich entertainment history – a duality that influenced both the larger concept and the project’s details. Times Square’s signature buildings and spectacular signs – the glowing walls of the Bowtie – create an outdoor room right in the heart of Manhattan. Snøhetta’s design creates uncluttered pedestrian zones and a cohesive surface that reinforces the Bowtie’s role as an outdoor stage.

This clear and simple ground surface made of precast concrete pavers creates a strong anchor for the space, allowing the excitement of Times Square’s commercial components to shine more brightly above. The area’s new two-toned custom pavers are embedded with nickel-sized steel discs that capture the neon glow from the signs above and playfully scatter it across the paving surface, referencing marquee lights and Times Square’s theater history.

Ten fifty-foot long granite benches oriented along the Broadway Axis define and frame the area’s public plazas. These benches manage pedestrian flow, creating interior pockets or eddies for people to stop and gather. Simultaneously, this allows for continuous thoroughfares on either side of the benches for quicker foot traffic. Rather than adding more visual distractions like signage, the design harnesses more implicit gestures such as the benches and renovated curbs brought up to street level, allowing users to feel psychologically at ease in an often-overstimulating public space.

New power and broadcast infrastructure embedded in the benches eliminate the need for of diesel generators, temporary power cables, and broadcast equipment, enabling swift and efficient set-up and break down of the over 350 public events that place in the Square annually. With a significant positive impact on public safety, air quality, and economic output, the project has transformed Times Square into a world-class civic space that reflects the best of Times Square and New York City, allowing the “Crossroads of the World” to retain its edge while refining its floor.