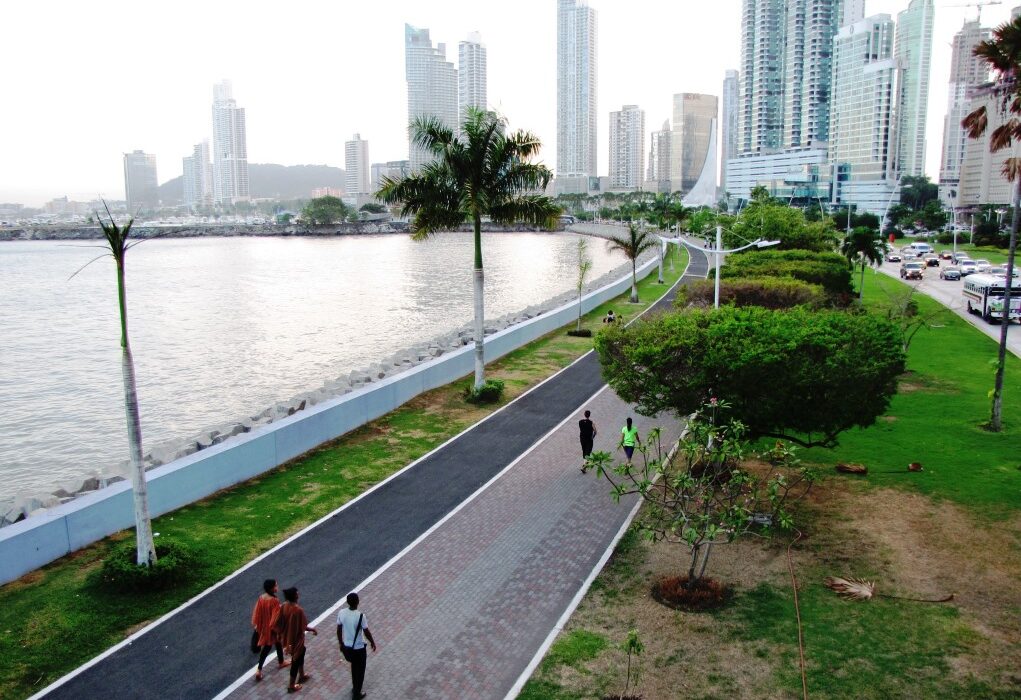 My wife and I (Storm Cunningham) love Panama. Although we normally spend most of our time in the north, closer to the border with Costa Rica, we’ve had many wonderful experiences in Panama City, especially along the waterfront, at the fish market and in the historic Casco Viejo. 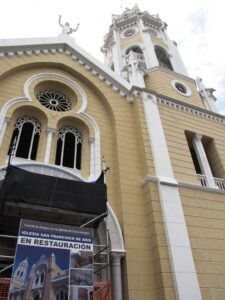 It’s been a while since we were last there, but one thing I’ll never forget from our last trip was the horror of the ride into the city from the airport: vast swaths of the beautiful, productive, protective mangroves along the city’s coast were being bulldozed for development.

It was then that I realized that—despite the city’s many charms—the local government and planners were truly clueless about ecology in general, and climate resilience in particular.

Panama City has tripled in size during the last 25 years as a result of rapid and unplanned urbanization.

Its geographic location, combined with a lack of adequate land use planning, deficient drainage systems, and weak local governance, all make it a city highly exposed and vulnerable to the impact of floods and rising sea levels. 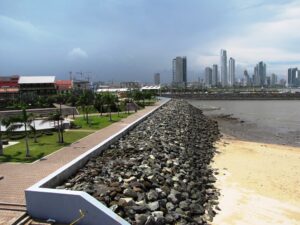 This scenario implies a major challenge for the socio-economic development and resilience of this city of two million inhabitants.

Urban expansion, characterized by landfilling and construction in mangrove areas, has aggravated the degradation and loss of the Panama Bay RAMSAR site.

In just fifteen years, between 2000 and 2015, mangrove coverage in the Tocumen basin has been reduced by 60%.

These degradation processes have caused a significant rise in the frequency and impact of floods in the watersheds and coastal areas, generating the risk conditions that have already been evidenced in other basins of the city, such as the Juan Díaz river basin.

With the support from the World Bank and the Global Facility for Disaster Reduction and Recovery (GFDRR), the Municipality of Panama carried out a strategic flood risk assessment of the Tocumen river basin, located in the eastern part of the city.

In this area, a development pole with key infrastructure has consolidated, including the Tocumen International Airport, the Pan-American Highway, and Line 2 of the city’s metro system.

The assessment identified a range of possible interventions, including nature-based solutions (NbS) such as the conservation and restoration of mangroves and riparian vegetation, the recovery of natural channel shapes and routes, and the creation of urban parks with native species.

The study analyzed three future development scenarios with the inclusion of climate change considerations and a time horizon of 2050 to assess the risk of floods in the Tocumen river basin: 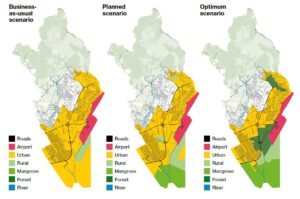 There are clear benefits associated with the conservation and restoration of coastal wetlands for flood risk mitigation , and currently undeveloped floodplains in the basin as sites for water storage, recreation, and education.

It is important to note that nature-based solutions alone will not be sufficient for effective flood risk reduction.

In order to achieve adequate levels of resilience to face climatic events such as heavy rains, storms, or rising sea levels, a comprehensive approach will be required that also includes other structural and non-structural risk management measures, where coastal planning plays a critical role.

In this context, the District Plan’s implementation, together with the flood risk mitigation proposals identified in this study, are essential for the sustainability and climate resilience of planned investments and urban development in this strategic area of Panama City.

Unless otherwise credited, all photos are by Storm Cunningham.

With the exception of the opening three paragraphs, this article (and map) is by Haris Sanahuja, Juliana Castaño-Isaza, Carolina Rogelis, and Alessandra Treuherz, and it first appeared on the blogsite of the World Bank. Reprinted here by permission.