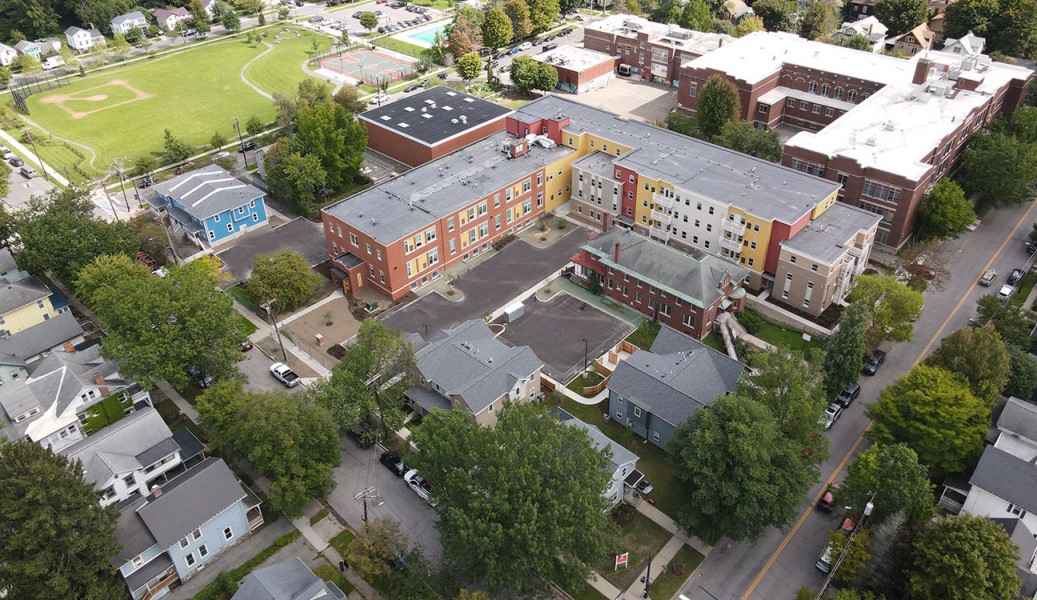 Reusing existing assets to boost affordable housing in downtown areas is one of the most reliable strategies for lasting community revitalization, as documented in the 2020 book, RECONOMICS: The Path To Resilient Prosperity. 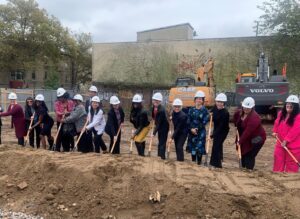 On November 1, 2022, it was announced that construction was underway at The Rise, a $50 million, 72-unit affordable and supportive housing development in Brownsville, Brooklyn.

In addition to being 100 percent affordable, the redevelopment will offer an array of health, wellness, employment and legal services to support residents and benefit the surrounding community.

The Rise, already honored for its climate-friendly design, is part of the state’s Vital Brooklyn Initiative to address chronic social, economic and health disparities in Brooklyn’s high-need communities.

The redevelopment site is on the southwest corner of the intersection of East New York Avenue and Strauss Street in Brownsville, Brooklyn.

One Brooklyn Health/Brookdale Hospital Medical Center had occupied the now demolished and underused building on the site. One Brooklyn Health will offer mental health services on the ground floor of the new building alongside office and programming space for the service providers.

Founders Way is a $27 million redevelopment near downtown Ithaca that provides 75 affordable and supportive apartments for individuals and families, plus commercial space for two local nonprofit organizations that offer advocacy and educational services to children and families in the community.

Founders Way was developed by Ithaca Neighborhood Housing Services, Inc. and consists of four buildings on the nearly two-acre campus of the former Immaculate Conception School, a co-educational Catholic school that served the community for more than 133 years. The main school building includes 67 apartments. In addition, a vacant single-family home was converted into two apartments, and two new three-unit townhouses were constructed on the site.

More information on both projects appears below.

“We are moving full steam ahead to ensure that long overdue investments in housing, wellness, and economic empowerment reach our Brooklyn communities,” Governor Kathy Hochul said. “With construction now underway at The Rise, we are one step closer to bringing deeply affordable housing to dozens of New York families and vital support and services to the entire neighborhood of Brownsville. I thank our local and state partners for their help in bringing this project to life, and I look forward to a ribbon-cutting soon.”

The New York State Energy Research and Development Authority selected The Rise design as a winner of its Buildings of Excellence competition in recognition of its design as a clean and resilient building. When complete, The Rise will meet both Passive House and LEED Gold Standards and achieve a carbon neutral performance.

All apartments will be affordable to households earning at or below 60 percent of the Area Median Income. 47 of the homes will be set aside for criminal-justice involved women and their families, supported by services and operating funding under the Empire State Supportive Housing Initiative. Eight of these will only receive Empire State Supportive Housing Initiative service subsidy.

Supportive services will be available for residents, as well as eligible members of the community, by the Women’s Prison Association and the Osborne Association. Services will include case management, job-readiness training and job placement, legal assistance, support groups for reentry transition and the development of social and wellness skills. Community Capacity Development, an organization that provides a capacity building program for the Brownsville community, will provide programming focused on critical thinking, conflict resolution, violence reduction, and health and wellness for members of the Brownsville community.

The development will also include approximately 10,000 square feet of green space for residents and the broader community to enjoy, including a rooftop farm and greenhouse managed by Project EATS that will provide healthy food options and job training. Rooftop solar panels will cover Project EATS’ greenhouse, allowing year-round urban farming programming.

Additional amenities will include lounges, community room, laundry rooms, outdoor terraces with raised gardening beds, and bicycle storage. Free Wi-Fi will also be provided throughout the building for residents and visitors, which is a hallmark of Governor Hochul’s commitment to increasing internet access across the state.

The Rise is being developed in partnership by Xenolith Partners, LLC, the Women’s Prison Association and the Brownsville Partnership. The building was designed by Magnusson Architecture & Planning PC.

State funding for The Rise includes Federal Low Income Housing Tax Credits that will generate $21.1 million in equity and $13.8 million in subsidy from New York State Homes and Community Renewal. The New York State Office of Temporary and Disability Assistance is providing $10 million through Homeless Housing Assistance Program. The New York State Energy Research and Development Authority is providing more than $1.2 million though the Buildings of Excellence Competition and the New Construction – Housing program and the project will be eligible to apply for additional support through the NY-Sun program for the solar component.

The Community Preservation Corporation provided pre-development and other financial support for the project through its equity investing division and has also committed to providing long-term permanent financing. This is the first project to close under the Community Preservation Corporation’s partnership with Xenolith, in which it provides capital and other assistance aimed at helping the Minority and Women Owned Business Enterprises company scale its capacity and business infrastructure.

About Founders Way, New York Homes and Community Renewal Commissioner RuthAnne Visnauskas says, “The $27 million Founders Way development is an investment in a better and more affordable future for individuals and families in Ithaca. The transformation of a vacant school has provided 75 households with safe, modern housing only a few blocks from the cultural, social, and economic hub of downtown Ithaca, with on-site supportive services for those who need them. The inclusion of community service space will yield educational benefits to all who call Ithaca home. Congratulations to our partners at Ithaca Neighborhood Housing Services for this remarkable achievement.”

The new community provides a total of 75 modern, energy-efficient affordable homes with a mix of studios, one-, two-, three-, and four-bedroom apartments. The development is conveniently located just four blocks from the heart of downtown Ithaca, the Ithaca Commons, and serves individuals and families at a variety of income levels ranging from 30 percent to 100 percent of the Area Median Income.

Thirteen households, including formerly homeless victims of domestic violence and formerly homeless young adults, will have access to onsite support services and rental subsidies funded through the Empire State Supportive Housing Initiative and administered by the New York State Office of Temporary and Disability Assistance. Services are provided by the Salvation Army and include assistance with adjusting to living independently, social activities, and referrals to appropriate community services.

Another nine units will provide supportive housing for people with developmental disabilities, with capital funding provided by the Integrated Supportive Housing Program administered by the Office of People With Developmental Disabilities and services provided by Racker Center.

The site’s two commercial units will be occupied by The Learning Web and The Village at Ithaca, both local nonprofits with education-centric missions who provide services including academic support, life skills training, and food support for children and families in the community.

“We are creating new opportunities for families to improve their lives and build a better, safer future, and Founders Way will provide many New Yorkers with the housing they deserve,” Governor Hochul said.

“This remarkable development represents a new beginning for this historic downtown campus that played an important role in the lives of city residents for generations. Now, Founders Way can help the city’s continued revitalization efforts by providing affordable homes and a place where residents can receive the support and services they need to thrive,” she concluded.

In the past five years, HCR has invested nearly $80 million to create and preserve nearly 700 homes in Ithaca, including West End Heights and the Ithaca Arthaus, both completed earlier this year, and a $75 million rehabilitation of two public housing properties.

Featured photo shows Founders Way. Both photos are courtesy of the office of Governor Hochul.