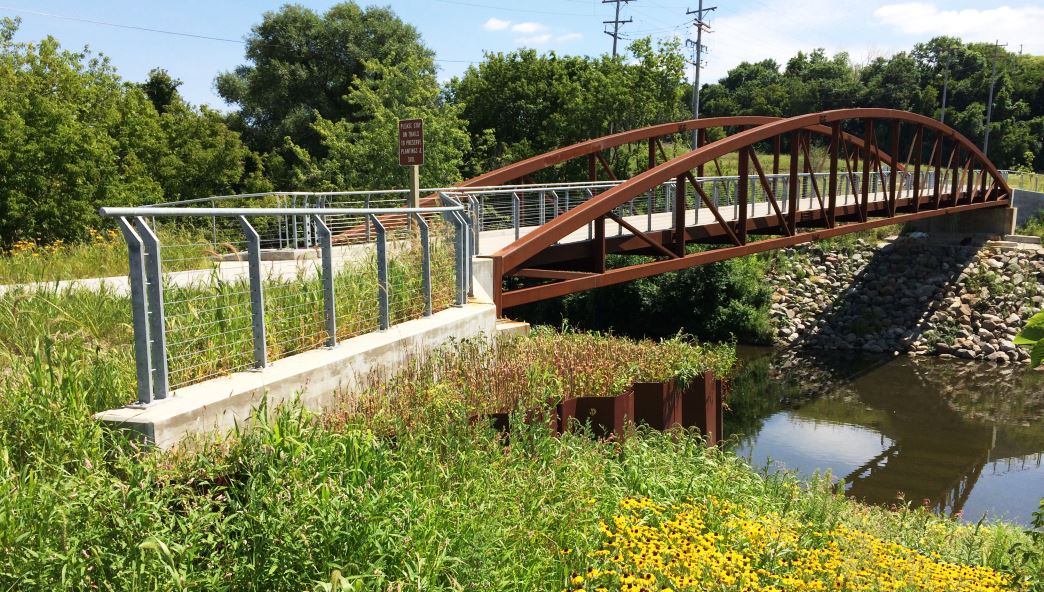 After nearly 30 years of planning, investigation and remediation—the city of Milwaukee, Wisconsin has completed cleanup of a 110-acre former brownfield site that they once considered “Wisconsin’s biggest eyesore.”

Long a shameful example of “corporate socialism”—poorly-regulated businesses that blight places and stick taxpayers with the cleanup bill—it’s now a shining example of the restoration economy at work. 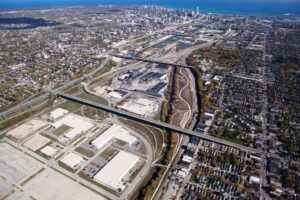 The Menomonee Valley. Photo courtesy of the City of Milwaukee.

Also included in the work was the ecological restoration of the Menomonee River riverbank and subsequent creation of the 24-acre Three Bridges Park, which helped to reestablish a physical connection from the Industrial Center property to the city’s southwest side.

The Wisconsin Department of Natural Resources Remediation and Redevelopment (RR) Program, which oversees environmental cleanups across the state, issued a “case closure” letter for the site to Milwaukee officials.

For the city, this means that the cleanup work on the property is essentially over; they have investigated the degree and extent of the contamination and restored the site to the extent practicable.

“The DNR congratulates the City of Milwaukee and its partners on this extraordinary milestone,” said DNR Secretary Preston D. Cole.

“Anyone who remembers what the land looked like around the former County Stadium in the 1970s and 80s must surely be amazed at the transformation that has taken place. The cleanup and redevelopment are a remarkable testament to the determination and energy put forth by so many who could see a brighter future for a big part of the Menomonee Valley,” he added.

For more than 125 years, the property was a heavily used manufacturing site known as the Milwaukee Road Shops; trains and rail cars were built and serviced there as part of the industrial revolution that began in the mid-1800s. By the 1960s, the site was underused. It was eventually abandoned and remained unused for two decades. The site that had helped the budding city grow was vacant and beyond repair.

“The entire site was a wetland filled with a wide range of fill material, and suffered from unstable soil conditions,” said Margaret Brunette, DNR RR Program Hydrogeologist, who has been overseeing the cleanup since 1992. “There were six miles of underground clay-lined sewers, an on-site wastewater treatment plant and contaminants such as asbestos and lead throughout the site.”

Also included was the restoration of the Menomonee River riverbank and the creation of the 24-acre Three Bridges Park, which helped to reestablish a physical connection from the Industrial Center property to the city’s southwest side.

While cleanup objectives were in the process of being met throughout the site, visionary companies were anxious to capitalize on Menomonee Valley’s future. Several companies began to build and call the new Menomonee Valley Industrial Center home, even before roads led to their loading docks and front doors. The public-private partnership driving the redevelopment established wage guidelines and other performance metrics to ensure that living-wages were returning to Menomonee Valley.

“Cities are always changing, reinventing themselves to benefit their communities. The work completed in the Menomonee Valley is a prime example of reinvention that has reclaimed land, added jobs and created recreational opportunities,” said Milwaukee Mayor Tom Barrett. “The success in the Valley was only possible because of the great cooperation among different levels of government, businesses, community groups and people who live in Milwaukee.”

The economic redevelopment and ecological restoration of the Menomonee Valley Industrial Center was already well underway in 2009 when the U.S. EPA (Region 5) recognized the project and its partners with a Phoenix Award for excellence in brownfield redevelopment. The partnerships forged in the early 1990s paid off.

“The Industrial Center is a wonderful example of how collaboration between a developer, in this case the City of Milwaukee, private parties and the Wisconsin DNR can lead to an incredibly successful sustainable project with significant economic, environmental and social benefits to the community,” said David Misky, Assistant Executive Director of Milwaukee’s Redevelopment Authority. “I am proud to have worked with DNR and its Southeast Region staff since the beginning of this project.”

Part of the cleanup and redevelopment included the reuse of concrete road material from the nearby Marquette Interchange project. Partnering with the Wisconsin Department of Transportation, city officials arranged for approximately 900,000 cubic yards of fill material to be relocated to shore up the floodplain, saving an estimated 75,000 truckloads of material from landfills.