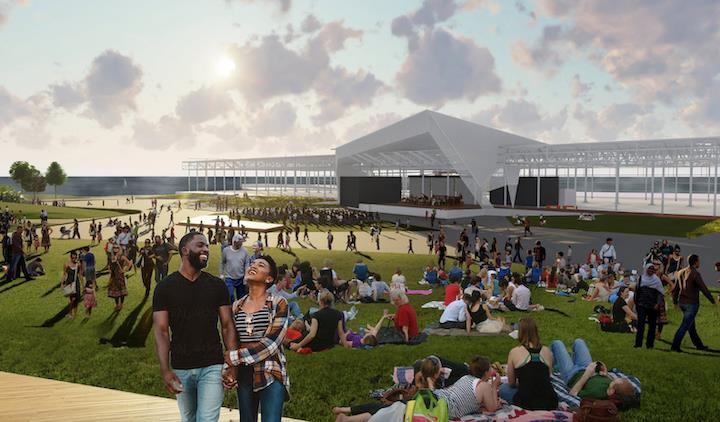 On November 9, 2021, construction began on a $13 million outdoor entertainment pavilion that will continue the dramatic revitalization of Buffalo, New York‘s Outer Harbor.

The project will renovate the long-abandoned Terminal B warehouse into an events center that utilizes existing parking and reclaims seven acres of contaminated property to open additional public access with scenic new lake views.

The project will also beautify and restore the habitat with new trees, shrubs and meadow areas, and add diverse plants to support migrating and nesting birds. Construction is expected to be completed by Fall of 2023. 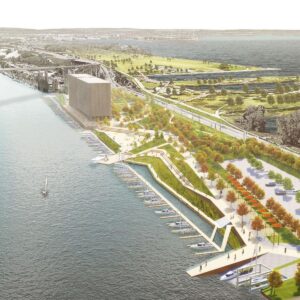 “This new, one-of-a kind events center will convert abandoned and contaminated property into performance space and access to revitalized green space,” Lieutenant Governor Benjamin said. “This $13 million investment is an important part of the on-going work to ensure that all New Yorkers can enjoy the natural beauty of Buffalo’s waterfront.”

This project, which takes up only 5% of the 200-acre property, is just one part of a comprehensive plan developed over five years with the community and stakeholders. 30 feet high and occupying approximately 100,000 square feet in area, the metal framed warehouse Terminal B rests on a landfill created from dumped material dating back over a half century ago and is currently inaccessible to the public.

“Projects like Terminal B’s transformation are critical to my administration’s continuing efforts to invigorate and elevate the unique cultural attractions that make Buffalo so special,” New York Governor Kathy Hochul said. “I am incredibly excited for the opportunity the pavilion will provide New Yorkers to appreciate my hometown’s beautiful waterfront in a whole new way.”

The renovation will reduce the terminal to its metal frame and concrete deck, a portion of which will become a canopied stage. There will be a green room for performers and another for mechanicals built inside the space. A sloped lawn, new landscaping and stairs will be added to enhance accessibility. 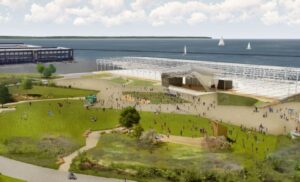 The existing asphalt drive will be renovated with a secondary walkway added around the sloped lawn connecting to the existing Lakeside Lawn and circulation path. Site lighting and other security measures will be installed near the structure and along the pedestrian paths leading to the main entry.

The Buffalo Philharmonic Orchestra will be amongst the many performers using the space for future concerts.

NYPA Chairman John R. Koelmel said, “We are pleased to see NYPA’s relicensing funds being used to repurpose the Terminal B site so that New Yorkers can enjoy the Buffalo Outer Harbor in new and creative ways. This project was developed with community and stakeholder input and NYPA is proud to support projects, like this one, that give our communities opportunities to gather and appreciate our beautiful gateway to the Buffalo-Niagara region today and for years to come.”

Funding for the project is being provided by Empire State Development (ESD) and ECHDC via the New York Power Authority through relicensing agreements tied to the operation of the Niagara Power Project.

ECHDC Chairman Robert Gioia said, “Looking at the renderings of the new pavilion, it is easy to picture people gathered on a summer evening to enjoy a concert, festival or special event at Buffalo’s beautiful Outer Harbor. The start of construction is the first step toward transforming the desolate and dangerous Terminal B site into an attraction all Western New Yorkers can enjoy while visiting the waterfront.

New York State is making a historic commitment to improving and expanding access to outdoor recreation. In 2013, nearly 400 acres of land on the Outer Harbor was transferred from the Niagara Frontier Transportation Authority (NFTA) to ECHDC. As part of that transfer, Buffalo Harbor State Park was designated as the 180th state park in New York’s system and the first in the City of Buffalo.

Representative Brian Higgins said, “This is the continued transformation of Buffalo’s waterfront from an old, industrial, desolate place to a dynamic, vibrant public destination that provides a range of lakeside experiences for residents and visitors to enjoy. Over 15 years later, the funding secured through the New York Power Authority settlement is still delivering for Western New York.”

The remaining approximately 247 acres of land north of Buffalo Harbor State Park is now operated by the ECHDC, which completed several capital improvements to increase public access to and use of this property, and conducted several community-driven planning studies that have informed the current and future disposition of the project site.

Buffalo Mayor Byron Brown said, “I can’t wait to come to this one-of-a-kind entertainment center to hear the Buffalo Philharmonic Orchestra, and other great performers, in what will be a beautiful open-air setting. It will be a perfect complement to all the projects that have been successfully developed on the Outer Harbor. I thank Gov. Kathy Hochul, Robert Gioia, and the Erie Canal Harbor Development Corporation, and the Empire State Development Corporation, for their unwavering mission to deliver world-class venues and activities on our City’s Outer and Inner Harbors. I also thank my colleagues in government who made this project possible.”

Turner Construction Company Vice President Steven Perrigo said, “Turner Construction is thrilled to be part of this transformational project for the Outer Harbor. It is great to see our waterfront getting reactivated, used and enjoyed.”

As a subsidiary of Empire State Development, the state’s chief economic development agency, the Erie Canal Harbor Development Corporation supports and promotes the creation of infrastructure and public activities at Canalside, the Ohio Street corridor and the Outer Harbor that are attracting critical mass, private investment and enhancing the enjoyment of the waterfront for residents and tourists in Western New York. Its vision is to revitalize Western New York’s waterfront and restore economic growth to Buffalo based on the region’s legacy of pride, urban significance and natural beauty.

Renderings courtesy of the Office of the New York Governor.