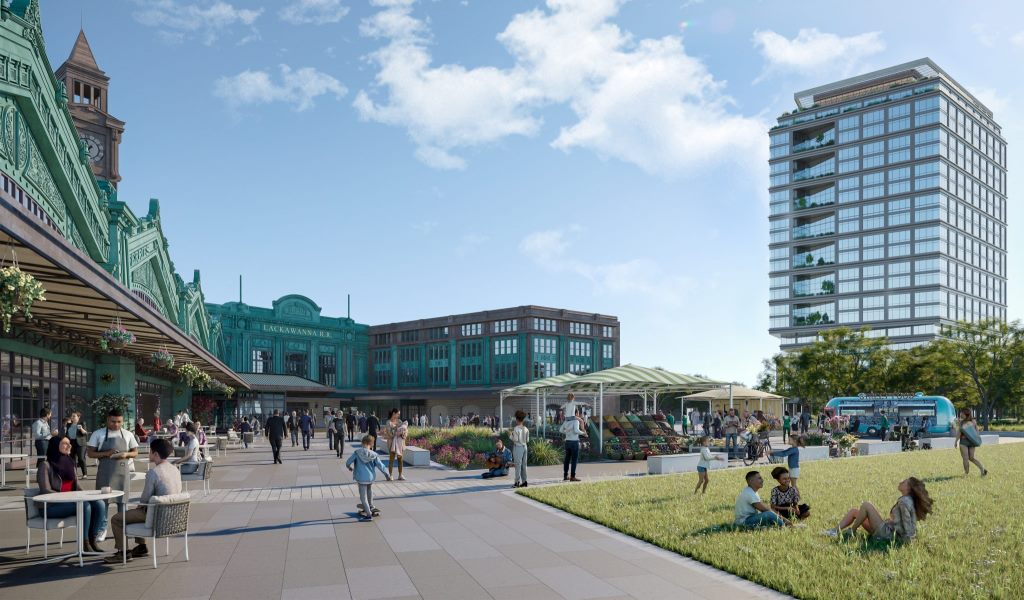 The project will reconnect the neighborhood around Hoboken’s historic train station, helping to revive it. 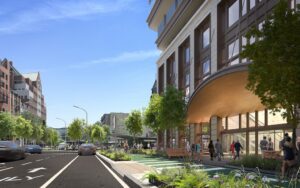 The project, which had been in development for 15 years—documented occasionally here in REVITALIZATION—was jump-started by Governor Phil Murphy’s administration, with the cooperation of various partners, including NJ TRANSIT, LCOR, and the City of Hoboken.

“This project has been 15 years in the making and I could not be more thrilled for it to come to fruition,” said Hoboken Mayor Ravi S. Bhalla.

“The City will reap the benefits of not only a rehabilitated transit hub, but much needed infrastructure upgrades, affordable housing, and retail space that will bring thousands of permanent jobs to the area. Thank you to Governor Phil Murphy and Senator Brian Stack, as well as Assemblywoman Annette Chaparro and Assemblyman Raj Mukherji for their commitment to this project and dedicating over $170 million of public investments to ensure its success,” he continued.

Hoboken Connect is a multi-phased initiative that consists of private and public components to be implemented in coordination over the coming five plus years. 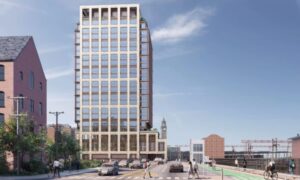 When complete, the project will directly and indirectly support 15,290 permanent jobs and $234 million in tax revenue annually. The City of Hoboken will see 4,433 jobs on site with $9.6 million in annual retail spending and $4.5 million in annual revenue, while NJ TRANSIT will benefit from ground lease payments, increased ridership, and customer experience improvements. More than 9,800 construction jobs will be created.

“NJ TRANSIT is grateful for Governor Murphy’s significant investment in our Hoboken Terminal, and to the ‘Hoboken Connect’ project that will comprehensively reimagine the terminal,” said NJ TRANSIT President & CEO Kevin S. Corbett.

“This important project will dramatically transform a long neglected historic gem of a terminal and promises to usher in a renaissance for Hoboken, spurring economic growth and transforming the customer experience at this vital transit hub that connects NJ TRANSIT rail, bus, and light rail services with PATH and NY Waterway ferries,” he continued.

“Modernizing our transit infrastructure is a cornerstone of building sustainable communities that will pay dividends for generations to come,” said New Jersey Department of Transportation Commissioner and NJ TRANSIT Board Chair Diane Gutierrez-Scaccetti. “This project is an example of how the public and private sectors can come together to make our cities more walkable and transit oriented as we continue to limit our impact on climate change.”

Public investments will include construction of a new bus terminal on Hudson Place; significant rehabilitation of the first and second floors of the Ferry Terminal for publicly accessible commercial and exhibition space; the redevelopment of Warrington Plaza; and improvements to Hudson Place to support bicycle and pedestrian access to the transportation facilities.

“Made possible by a combination of vision, tenacity, and public-private synergy, the Hoboken Connect project will serve as a microcosm of all that my Administration is determined to accomplish,” said Governor Phil Murphy.

“In addition to incorporating environmentally sustainable design features, this long-awaited development will also produce millions of dollars in revenue for both Hoboken and NJ TRANSIT. Just as crucially, this game-changing project will connect New Jerseyans to economic opportunity through affordable housing, public and active transportation options, and thousands of good-paying jobs,” he added.

Governor Murphy and the Legislature committed $176 million during the FY2023 budget agreement to this project through the Debt Defeasance and Prevention Fund.

“The groundbreaking today marks a historic day for Hudson County and the exciting future to come,” said Assemblywoman Annette Chaparro. “This project has something for everyone. Whether someone is visiting for the day, looking to travel, or looking for an affordable place to live, they will be able to find what they need right here in Hoboken. I am grateful the groundbreaking is finally here and I am excited to see how impactful the Hoboken Connect project will be for years to come.”

All improvements will be made according to applicable historic preservation guidelines.

“The improvements to our public transit infrastructure will also help Hoboken Terminal realize its potential as a world-class transit hub, and I am proud to have worked on the FY2023 budget and championed this appropriation to bring such an impressive project to fruition,” he explained.

“The vision for Hoboken Connect was created through a collaborative process, aligning the interests of NJ TRANSIT and the City of Hoboken with the broader goals of the redevelopment, which include transforming and re-activating this historically significant gateway to Hoboken, driving new economic development opportunities, investing in NJ TRANSIT infrastructure and creating new and inviting public spaces for the local community,” said Brian Barry, Senior Vice President at LCOR.

“We’re thrilled to be breaking ground alongside key stakeholders who have played an invaluable role in advancing the vision for Hoboken Connect, including the State of New Jersey, NJ TRANSIT, the City of Hoboken, and all labor entities, and look forward to bringing this transformative waterfront project to fruition for both Hoboken residents and those commuting through the area,” he concluded.

All images courtesy of the Office of Gov. Phil Murphy.