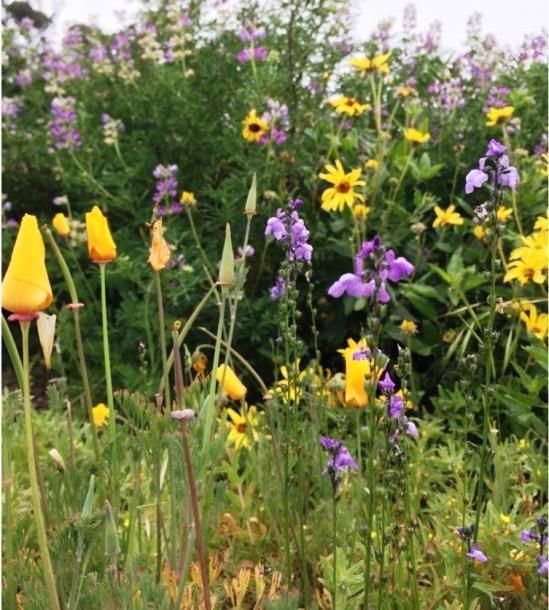 With much of northern California suffering catastrophic wildfires fueled by the climate crisis, students in southern California are seeing a different side of fire. In conjunction with the Cheadle Center for Biodiversity and Ecological Restoration (CCBER), the Santa Barbara County Fire Department conducted a one-day prescribed burn at the University of California – Santa Barbara (UCSB) lagoon, near Campus Point.

The .36-acre burn is part of an ongoing management effort to control non-native grasses and establish native bluff scrub vegetation. Building on successful past burns, this treatment will be conducted on a day with the least amount of fog in order to generate enough heat to reduce the viability of the non-native seed bank, and on a day with the best conditions for dispersion.

“The goal of this burn is to continue to expand the restoration of Lagoon Island to a diversity of annual wildflowers and low coastal bluff and sage scrub native vegetation to replace annual grasses and weeds, which dry out in the summer and pose a fire risk,” said Lisa Stratton, CCBER’s director of ecosystem management. “We hope to increase native plant diversity from 2 non-native species to more than 20 native species.”

This year’s marks the eighth prescribed burn implemented on Lagoon Island since students of Carla D’Antonio, a professor of evolution, ecology and marine biology and of environmental studies, in 2007 demonstrated that adding supplemental fuel effectively eliminated the seed bank of the invasive grass known as rip gut brome.

“Working with County Fire and the UCSB fire marshal, these fires are contained within a cleared ring and monitored until the embers are cold,” said Stratton.

“By clearing the monoculture of dried annual grass that arrests natural succession, this management process allows a high diversity of wildflowers and native coastal sage scrub to become established. Walk around the lagoon any time of year and you’ll see a wide variety of flowering plants that support birds, butterflies and other insects and restores our heavily impacted coastal habitats for generations of students to appreciate,” she explained.

The burn proposed this year will fill in a gap between previous years’ restoration projects that followed the prescribed burns. According to Stratton, the fire will burn for about 25 minutes, with the remaining time—about 3 hours altogether–spent on mop up activities designed to get the larger branches to burn down and ensure the fire is safely out.

Once the exact date was decided according to weather conditions, the burn was scheduled to begin in the late morning and conclude by 4 p.m. It was conducted when meteorological conditions are highly favorable to direct smoke away from populated centers. County Fire and the Santa Barbara Air Pollution Control District collaborated to ensure the fire occured on a day when winds blew the smoke south or straight up, humidity was lower than 50% and wind speeds were low.

During the event, the site was managed by county fire crews and CCBER staff.

“The collaboration with County Fire and the UCSB Fire Marshall has been wonderful,” noted Stratton, “and is mutually beneficial with a training opportunity for them and a successful conversion of flammable dry annual grass vegetation to more diverse, evergreen native flowering shrubs adapted to the coastal environment.”

Due to changing winds and weather conditions, it is difficult to predict which areas of the county, if any, would be affected by smoke from the burn. Residents were made aware of the burn to avoid panic, given that southern California has its own wildfire challenges.

Photo of restored wildflowers at the campus lagoon courtesy of UCSB.

This article by Shelly Leachman originally appeared on the UCSB website. Reprinted here (with minor edits) by permission.