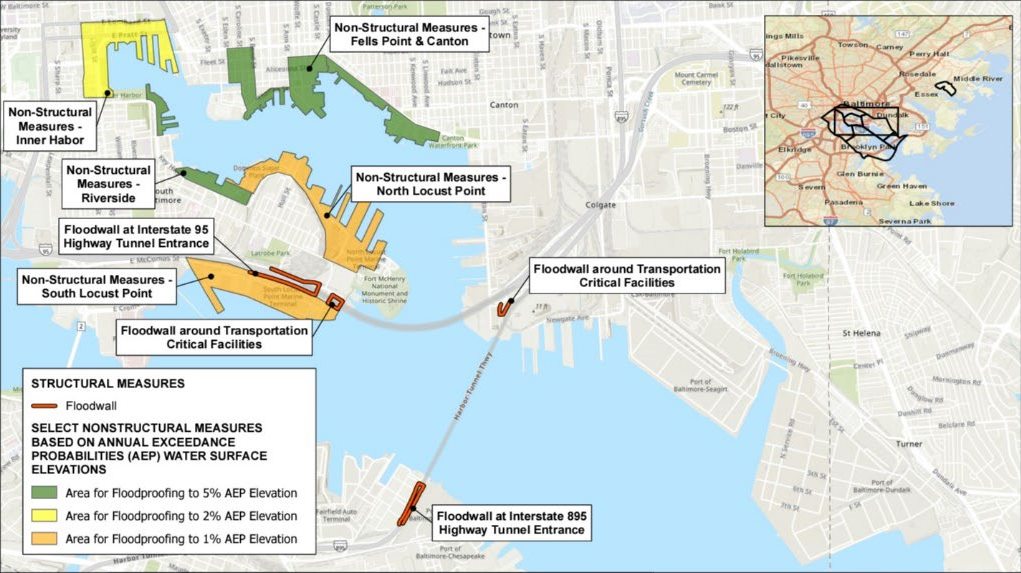 As with most coastal cities worldwide, the Baltimore, Maryland metro region is highly susceptible to flooding, and future storms (including tropical storms, hurricanes, and nor’easters) may result in increased flood risk.

Coastal storms have produced extensive property damage and loss of life resulting from storm surge and flooding in the recent past, particularly from Hurricane Isabel in 2003, which resulted in costs of $4.8 million to the City of Baltimore, up to $252 million in total damages in Southern Baltimore County, and one fatality. In Baltimore City alone, annualized damages due to coastal flooding are estimated at $2.2 million.

On July 6, 2022, the U.S. Army Corps of Engineers (USACE), Baltimore District—along with the non-federal sponsor, the Maryland Department of Transportation (MDOT)—published for public review and comment a draft report and Environmental Assessment (EA).

The tentatively selected plan incorporates floodwalls and closure structures at the Interstate (I)-95 and I-895 tunnels, as well as at the Fort McHenry and Harbor Tunnels ventilation buildings.

Examples of floodproofing measures include door and window barriers, raising mechanical systems, and installation of flood resistant materials. Participation in nonstructural floodproofing is voluntary. The net annual benefits of this plan are estimated at $4.42 million.

USACE hosted a 30-day comment period that ended August 5, 2022, in preparation of the Final Feasibility Report and EA.

For the proposed plan to lead to construction, it would need a signed USACE Chief’s report and additional Congressional authorization and funding.

Non-federal sponsors would also need to be identified and solidified. During the Pre-Construction Engineering and Design and construction phases, the project would be cost shared 65 percent federal and 35 percent non-federal.