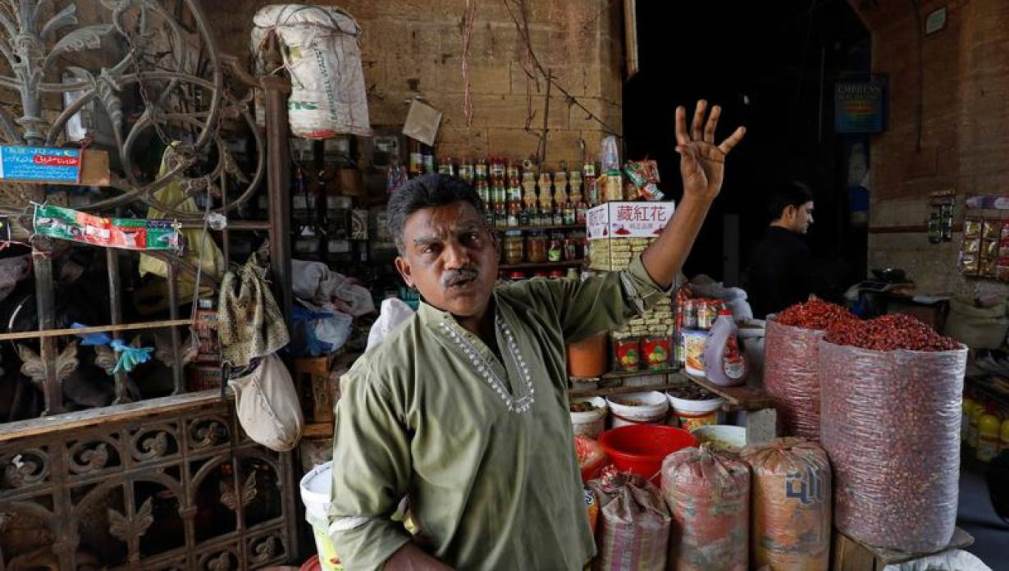 The modernization of Karachi‘s old downtown is one of a string of projects aimed at revitalizing Pakistan‘s largest city and economic powerhouse.

“My own business has been cut in half,” said Abbasi of the modernization drive ordered by the country’s Supreme Court in January to clean-up large swathes of the city’s historic centre, which he says has driven away so many vendors that fewer people now visit the area.

“We need these changes for the country to move forward but it needs to be done properly,” he said, surrounded by barrels of mango pickle, chilli powder and turmeric at the stall his grandfather built more than 80 years ago. 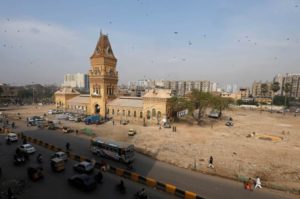 View of the British era Empress Market building after the removal of surrounding encroachments by order of Supreme Court in Karachi. REUTERS/Akhtar Soomr

The modernisation of Karachi’s old downtown is one of a string of projects aimed at revitalising Pakistan’s largest city and economic powerhouse, which has long been plagued by traffic congestion, water and electricity shortages and rampant crime.

But experts say the politicking by local parties and wrangling between different levels of government that have stalled Karachi’s growth for decades continue to hold back development.

Public transit programmes, including a shiny new bus service and the revival of a long-closed inner city rail service, are among the projects stuck in the gridlock.

Both transport schemes have been held up awaiting authorization from Islamabad to invite bids to supply new buses and begin laying railways tracks, according to Sindh province’s Transport Minister Awais Qadir Shah.

Muhammad Sualeh Faruqui, CEO of the federal development corporation in charge of the bus project that is expected to move 250,000 commuters daily, said an agreement between the provincial and federal government should be finalised soon.

But no movement has been made on the bus or rail projects since Reuters spoke to Faruqui in January.

On March 30, 2019, Prime Minister Imran Khan announced the allocation of 162 billion rupees ($1.15 billion) for Karachi’s development, to be primarily spent on transport and sewage projects.

“We need to make a master plan for Karachi and define the limits of the city and whether it will expand beyond its current area,” Khan said. 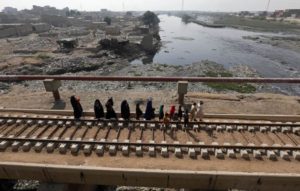 Women and children walk along a bridge with a newly installed railway tracks and concrete beams for the Karachi Circular Railway (KCR) in a low-income neighbourhood in Karachi. REUTERS/Akhtar Soomro

But more than 50 years later, the city’s infrastructure has failed to keep pace with a population that has sky-rocketed more than 300 percent, leaving many public services such as health, transport, and water either provided by an informal private sector or controlled by organised crime.

The city nevertheless remains key to Pakistan’s shaky economy, now on the verge of its 13th IMF bailout since the late 1980s, accounting for 20 percent of the country’s gross domestic product (GDP), according to World Bank figures.

A study by the NED University of Engineering and Technology found that traffic congestion costs Karachi $2 billion annually. Data from the local municipal corporation showed more than 3 million motorcycles currently in use with 25,000 added each month.

To be sure, efforts to revitalise Karachi have achieved some success, most notably in curbing the violent crime for which the city had become notorious.

In 2013, the national government of then-Prime Minister Nawaz Sharif gave free rein to the paramilitary Rangers for a sweeping crackdown on criminal gangs.

That, say police officials, saw the annual number of murders fall from more than 2,500 to fewer than 500 in the space of a year.

“If this had been achieved in the West, studies would have been carried out to replicate these results,” said senior police official Abdul Khalique Shaikh.

The falling crime rate has meant some upscale neighbourhoods have seen a spike in new restaurants, from hipster burger joints to taco food trucks, alongside high-end retail outlets.

But decades of growing congestion and neglect have turned places such as the Saddar area, where the Empress Market is located, from a spot where all Karachiites once rubbed shoulders into a rundown shopping and business district avoided by the well-off.

The once fashionable part of town, now lined with crumbling colonial-era buildings, is a transport hub for nearly 20 million residents. Every day, an overcrowded network of private buses and vans cart thousands to and from work in the bustling downtown.

Shah, the provincial transport minister, blames delays in the rail and bus projects on the federal government, which he accuses of “playing political games.”

The federal information ministry did not respond to a request for comment.

Karachi’s administration has been dominated for decades by the Mohajir Qaumi Movement (MQM), which has traditionally drawn support from the descendents of Urdu-speakers who migrated from India following partition in 1947, but had little following beyond the city.

The MQM was involved in bloody factional battles in the 1990s and 2000s and was accused by opponents of running the city like a mafia fiefdom, allegations it denied.

It has come under increasing pressure since the crime crackdown, which saw the party split into several factions. As a result, the city’s politics are now more competitive, but also more fragmented.

“There is no one taking ownership of Karachi,” the city’s MQM mayor Waseem Akhtar told Reuters, adding the city saw little return for the millions in revenue that went to provincial and federal governments. “From the Federal or Sindh government there is no seriousness.”

None of this is any comfort for Karachi’s long suffering commuters who are forced to trudge through hours of traffic on their daily commutes, as the city’s main traffic artery comes to a complete standstill during rush hours.

“With the non-serious attitude of all the parties involved, I don’t see the project taking off for the next two, three years,” a senior bureaucrat, who asked not to be identified, told Reuters.

This article by Saad Sayeed (edited by Alex Richardson) was originally published by the Thomson Reuters Foundation on their PLACE website. Reprinted here with permission.