Developed in collaboration with Brussels-based studio a2rc and developers Immobel Group and BPI Real Estate, the scheme will expand the huge potential of the site, preserving the recognizable character of the area’s heritage while introducing new communities for living and working. 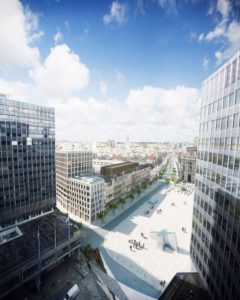 Reclaiming an urban area formerly dominated by corporate offices, the project—called Brouck’R—will unify city living and working in a single, central city block that opens onto the grand Place de Brouckère. The design for the block balances the architectural heritage of Brussels’s grand Belle Époque structures with a contemporary approach to style and scale.

“Cities must be places where people can move freely and fluidly, finding personal ways to connect with the city around them,” explains Jacob Kurek, Henning Larsen Partner in charge of Brouck’R.

“Brussels, while one of Europe’s oldest cities, has a rich urban fabric and thriving culture that makes it feel youthful. This, plus the city’s willingness to innovate and reinvent itself, makes this an incredibly exciting project to be involved in” he added.

Brouck’R will rise in concert with Brussels’ expanding pedestrian zone, establishing a new community in the city center dedicated to street-level activity.

Bringing Public Life Back to the Center 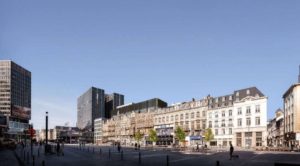 Place de Brouckère, located within the Brussels’ central Pentagon, was once a bustling pedestrian plaza but fell out of popular use as the city emphasized automobile and large-scale construction projects in the mid-20th century.

The “Brusselization” of the city, as this growth came to be known, resulted in an urban core hollowed of residential spaces as many Brusselaars moved to the city’s outer neighborhoods.

Brouck’R expands on successful local efforts to pedestrianize and re-center civic life in Brussels’ urban core, wrapping an entire block with apartments and student accommodations at a scale largely unseen in the city center. The design comprises 311 new residences, divided between typical apartment and student-geared accommodations (see facts below.) 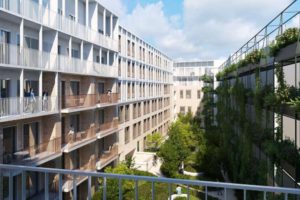 The courtyard at the building’s center will be a green oasis for the residents, with gardens at the ground level and trellises/green walls that climb upwards along the south and west internal facades. Commercial and retail program, which makes up nearly a quarter of the development, will anchor the buildings at ground level.

“The whole concept behind the scheme for Brouck’R is to bring back its original energy, to bring back the things that have been lost in translation over the years,” says Kurek. “We see it less as a new development than as a revival of an exciting, forgotten heritage.”

Balancing Heritage and the Future 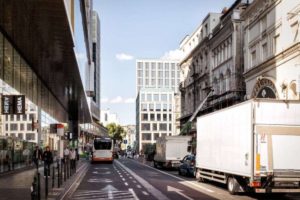 Brouck’R’s four facades each face different urban conditions; the iconic row of 19th-century facades lining the Place de Brouckère will remain, fronting new construction behind. The remaining three façades will appear continuous, broken down into modules that change every 18-20 meters, an approach that links the design to walking pace, rather than at the speed of traffic.

A variety of brick construction types to reduce the scale of the massing. Looking up, the building’s upper floors will be clad in slim, light-colored material that visually marks not just a difference in program types but in living styles. Where the brick-clad apartments that comprise the bulk of the residential program visually link to the surrounding context, the block’s cloud-like top suggests a new outlook on urban life. 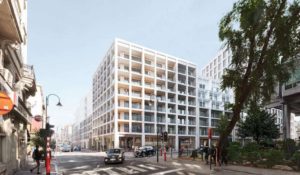 “Much in the same way Brussels tends to transform itself, our vision is about introducing accessibility, and permeability. The four elevations that face the street combine new design with existing architecture, with spaces in between offering glimpses into a green oasis at the center,” Kurek explains.

“Offering pleasant views to those who populate the block, it is the calm flipside to and Scandinavian influence on the bustling urbanity at Place de Brouckère,” he concluded.

Construction on Brouck’R is expected to commence in mid-2021 and reach completion in 2024.