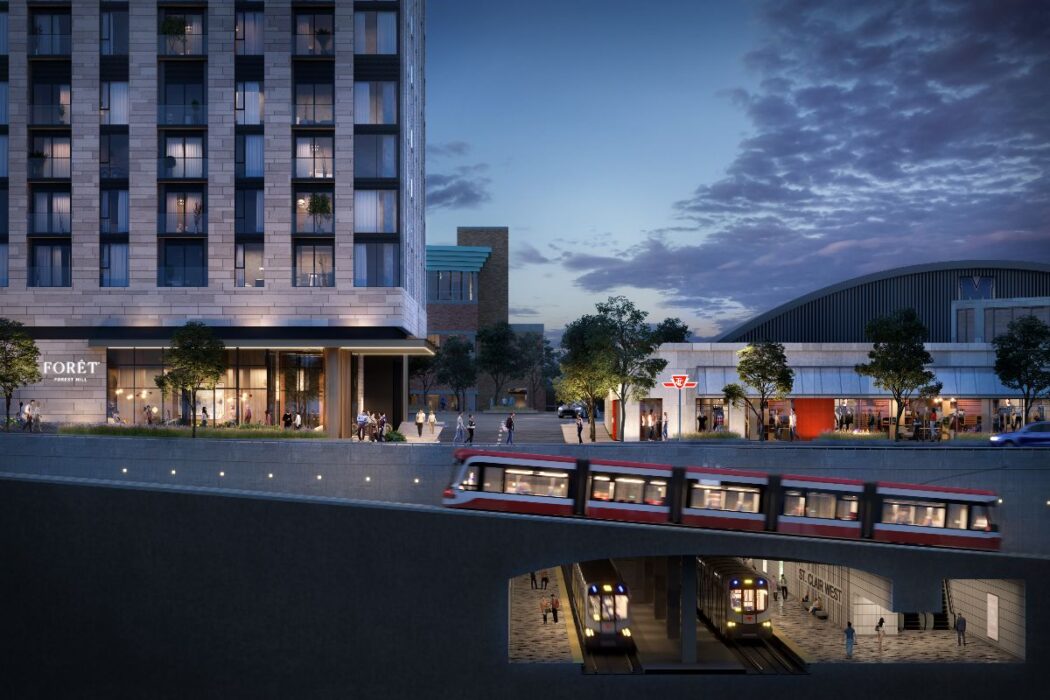 In issue #171 of REVITALIZATION, we featured this beautiful redevelopment project by Windmill Development Group, which is turning an old gas station in Toronto, Ontario, Canada into a new mixed-use, pedestrian-friendly, transit-oriented neighborhood.

Now, just a few issues later, another company, Canderel, has announced a mixed-use, pedestrian-friendly, transit-oriented project in Toronto. And it’s also redeveloping a now-vacant property that had once housed a gas station. We often hear of other aspects of the shift from urban design that primarily serves automobiles to design that serves people, such as turning streets into pedestrian malls.

But turning gas station sites into pedestrian-friendly, transit-oriented housing goes beyond pedestrianization, helping to solve the housing crisis at the same time. 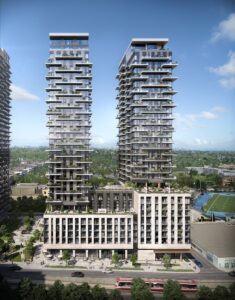 On June 14, 2022, Canderel introduced Forêt, a three-tower, mixed-use community, to the corner of Bathurst and St. Clair in Toronto.

This latest redevelopment by Canderel is the largest mixed-use community to ever come to Forest Hill, and will revitalize a prominent corner in midtown Toronto.

Acting as an important gateway to Toronto’s most coveted residential neighborhoods, such as Forest Hill, Cedarvale, Wychwood and South Hill, the design reinvigorates a gap in the urban fabric with enriched public space, creating a new social hub and destination for the area.

“We’re thrilled to be launching the largest mixed-use community in an area we have been working in for years, and that we know well,” says Ben Rogowski, COO of Canderel.

“Forest Hill historically has been known as a neighbourhood at the forefront of high design with some of the most sought-after real estate in the country. In keeping with that sentiment, we’re bringing a vision that will celebrate the history of the area while ushering in a new era of sophisticated urban living,” he added. 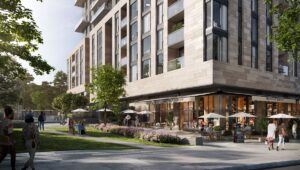 Forêt is a highly connected, transit-oriented development just a few steps from the St. Clair West subway station which will bring its residents to and from the Financial District in less than 12 minutes.

The East-West dedicated St. Clair streetcar is located in front of the community, right ­­­on the doorstep. The three-tower community is also adjacent to the Forest Hill Loblaws supermarket and is conveniently located close to other independent food and grocery stores, retail, restaurants and other amenities.

Tall and slender with a light-colored podium and accenting bronze panels, Forêt’s towers marry modernism with traditional luxury, while also providing a sophisticated backdrop for the public amenity spaces.

With architecture by BDP Quadrangle, Forêt will revive the corner of Bathurst and St. Clair, a junction that is characterized by vastly different built forms as you look from east to west. 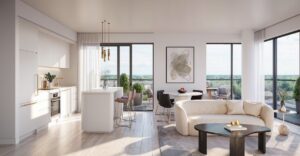 “With Forêt, we’re marrying the modernist, luxury buildings and wide boulevards of St. Clair to the east of the site with the charm of the traditional retail storefronts to the west,” says Sami Kazemi, Principal, BDP Quadrangle.

Forêt’s three towers unite with similar materiality, palettes, and proportions, yet remain unique through slightly different defining features. Moving from the corner, the first tower is defined by its tall and slender proportions.

The second and third towers boast a light-colored podium façade accented by bronze panels, providing a sophisticated backdrop for a mix of amenity spaces, including ground floor retail, an urban square, childcare centre and a new city park.

“Inspired by the lush tree coverage and ravine landscapes of Forest Hill and surrounding neighbourhoods, the design for the new pedestrianized areas and green space, will visually stich the intersection back to the natural topography of the area,” says Kazemi.

Residents of the broader community will be able to enjoy a lively retail scene within a beautifully landscaped public square, and a new city park.

Landscape architecture firm, Site/C, led the vision for the privately owned public space (POPS), which will act as a corridor to a new city park and become a destination for both residents and the public. 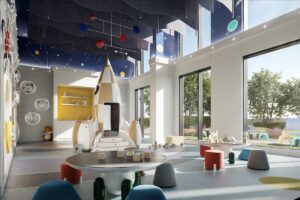 “The intent behind the public space at Forêt was to create a dynamic area for people to walk, sit, and participate in activity, not just pass through,” says Marvin Cruz, Principal of Site/C Landscape Architecture.

“We are working towards a design to include a variety of programming such as feature walls with natural elements, street furniture, public art and feature lighting,” he added.

Canderel’s new three-tower community will provide a new residential offering for the neighbourhood with suites ranging from studios to three bedrooms.

Unique to the market, is a nine-floor Boutique that sits on top of the uppermost portion of the East tower and will include access to a private lobby, amenities, and suites with 10-foot ceilings, and high-end finishes. Purchasers in the Boutique can also combine suites to create larger homes with custom finishes.

Foret will provide a new residential offering for the neighbourhood with contemporary residences ranging from studios to three bedrooms. Unique to Toronto’s real estate market, is a nine-floor Boutique building that sits on the uppermost portion of the East Tower.

“Forêt is classic in its detail and contemporary in its appearance,” says Dan Menchions, Partner at II BY IV DESIGN. “We are imposing an aesthetic that creates a sense of calm throughout the entire project.”

II BY IV DESIGN led the interior design of all three residential buildings, which feature natural wood, stone and metal materiality complemented by intimate detailing. II BY IV DESIGN is also working with Canadian artists to deliver traditional and sculptural art throughout the buildings’ corridors, lobbies, and amenity spaces.

Forêt boasts close to 40,000 square feet of indoor and outdoor amenity space throughout all three buildings, including several outdoor terraces with communal seating and barbecues, an outdoor pool and an indoor pool overlooking an outdoor patio with cabanas.

The private, boutique level amenities include a chef’s kitchen with dining and seating connected to an outdoor terrace with barbecues, fireplaces, and communal seating.

Experiencing the wonder and awe of Forêt doesn’t stop with the adults. The kids playroom amenity offers a chance to explore the greatest depths of childlike imagination with a thoughtful and interactive design.

Post-secondary institutions in the area include the University of Toronto, George Brown College, and Oxford College of Arts.

Canderel has been active in the St. Clair West neighborhood for several years, introducing multiple developments that put community needs at the forefront. The developer has gained a reputation for bringing thoughtfully designed, mixed-use projects with diverse product offerings, including St. Clair Village, 625 Sheppard Avenue, DNA 1, 2 and 3 on King West, award-winning Residences of College Park at Bay and College, which includes a 1.9-acre park.

Canderel is also the developer that brought the landmark 80-story Aura tower to downtown Toronto and the master planned Tour des Canadiens, a three-tower redevelopment in downtown Montreal.

I (Storm Cunningham) predict that we’ll be seeing more of their work here in REVITALIZATION.

All images courtesy of Canderal.