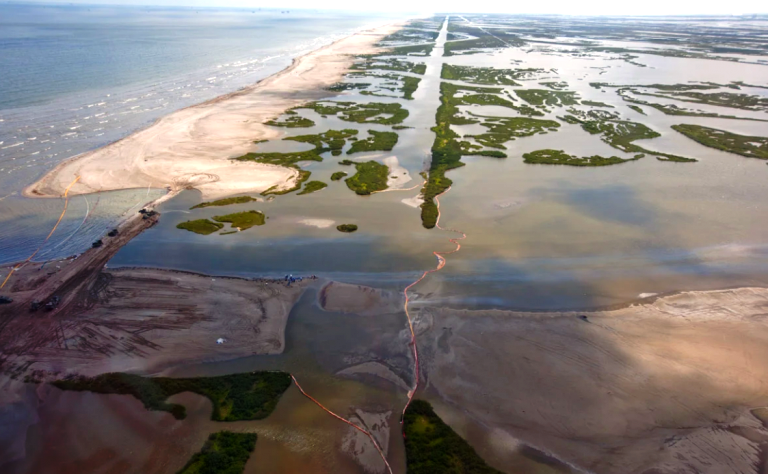 Coastal Louisiana has changed a lot in the last century. By comparing aerial photographs from the 1930s to today, we can see that change across the coast — from an ecosystem once dominated by extensive marshes and lush swamps to one increasingly covered with open water and “ghost forests.”

Each year, our coast creeps farther inland as marshy shorelines erode due to boat wakes, wind and waves. This is called marsh edge erosion, and it’s one of the primary causes of Louisiana’s current land loss crisis.

Future land loss, however, will be driven by different causes. To better understand and prepare for future scenarios, the Environmental Defense Fund (EDF) convened a team of scientists from its own organization, the University of New Orleans, Tulane University, The Water Institute of the Gulf and the National Wildlife Federation.

Together, we used computer models and data from Louisiana’s 2017 Coastal Master Plan to look ahead 50 years and explore the effects of varying sea-level rise and subsidence rates, known as relative sea-level rise. The recently published results were illuminating — and sobering.

Here is the main takeaway for Louisiana:

The marsh edge erosion that is so pervasive across thousands of coastal miles today will play a smaller role in overall wetland loss in the future. It will still be a substantial problem, causing the loss of over 20,000 acres of coastal marsh within 50 years, but relative sea-level rise will soon be the primary cause of coastal land loss in Louisiana.

The extent to which this happens, and when, depends on the rate of sea-level rise caused by thermal expansion of the oceans and how fast the glaciers and ice caps melt due to greenhouse gas emissions. Whether we can slow down the rate of sea level rise by limiting emissions will in turn determine the rates of land loss over time.

A plan to protect and prepare our coast.

While these numbers are stark, the good news is that having a better understanding of the primary causes of future land loss will help improve the next Coastal Master Plan in 2023 so that Louisiana can make its coastline more resilient.

Until now, the master plan, developed by the state’s Coastal Protection and Restoration Authority, has been based on projects that address problems recognized 20 years ago, such as marsh edge erosion. The master plan analyzes how these projects will perform over 50 years, and that performance changes over time because of sea level rise, hurricanes and subsidence.

If coastal restoration projects are to be successful, they must account for future causes of land loss, such as sea level rise. This new research enables Louisiana scientists and planners to develop, evaluate and build projects that can reduce the rate of land loss even under high sea level rise scenarios.

By addressing the challenges of tomorrow, Louisianans can develop bold and innovative solutions that work together with key projects in the existing master plan, such as large-scale diversions, and implement them to mitigate the worst effects of sea level rise before they occur.

This article by Dr. Denise Reed, Professor Gratis, University of New Orleans, originally appeared on the website of the Environmental Defense Fund. Reprinted here (with minor edits) by permission.