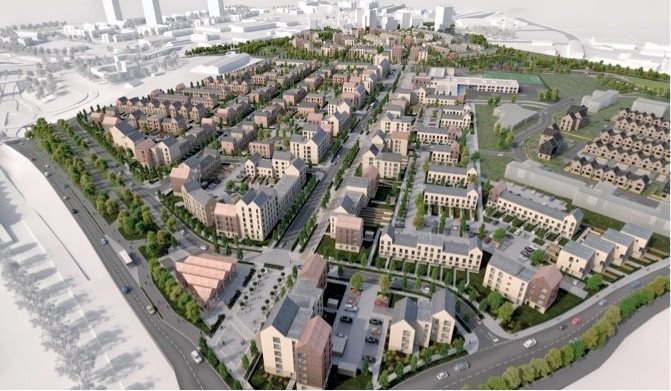 In Glasgow, Scotland, the area called Sighthill is a public housing development north of the River Clyde.

Designed by Crudens Ltd, it was built by Glasgow Corporation Housing Department between 1964 and 1969. 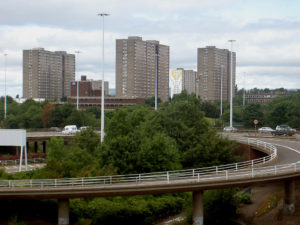 The Pinkston area of Sighthill as seen from Townhead (by Anonymous, via Wikipedia).

It was constructed on the derelict “Soda Waste” property, where the United Alkali Company‘s St. Rollox Chemical Works, founded by Charles Tennant. At one time, it was the largest chemical manufacturer in the world, and used to dump waste chemicals there until its closure in 1964.

The neighborhood later suffered from stigma, as high-rise, penitentiary-style low-income housing went out of fashion. It has suffered from low demand since the mid-1970s, despite its proximity to the city center.

Due to its low occupancy rate, Sighthill was selected in the late 1990s, along with nearby Red Road, as a temporary housing location for refugees and asylum seekers. As a result, Sighthill has one of the most diverse ethnic makeups in Scotland. 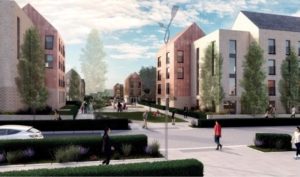 Now, on October 12, 2017, the Glasgow (Scotland) City Council announced the appointment of Keepmoat Homes as its preferred developer for the provision of more than 800 new homes through the residential development at the Sighthill Transformational Regeneration Area (TRA) in the city.

The residential development will feature 826 new homes (628 for sale, 198 for mid-market rent), as well as retail units and a commercial development over the next decade to complete the regeneration of Sighthill.

Councillor Kenny McLean, City Convener for Neighbourhoods, Housing and Public Realm, said: “This is a historic day for Sighthill and Glasgow. The appointment of Keepmoat Homes as our preferred developer to deliver new homes, shops and a commercial development in Sighthill marks the next step for the regeneration of Sighthill. This area, immediately to the north of the city centre, has fantastic potential, and I am sure it will become an example of regeneration to follow in the years to come. I would like to thank all those organisations involved in the process, and I am delighted with the quality of the proposals put in front of us. This quality gives me great confidence in the future success of this project.”

The new mid-market rent homes will be built by Glasgow Housing Association (GHA) and let and managed by GHA’s partners in Wheatley Group, Lowther Homes, with the private homes, retail unit and commercial development being delivered through a development agreement between Keepmoat Homes and Glasgow City Council. 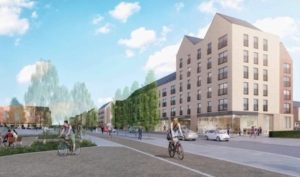 When complete, the regeneration of Sighthill, the biggest such project in the UK outside of London, will deliver almost 1000 (141 new GHA homes are already built and occupied) new high-quality homes for sale and rent; a new community school campus; a new footbridge across the M8, creating a ‘street in the sky’ to connect Sighthill to the neighbouring city centre; a new road bridge across the railway to link Sighthill and Port Dundas; as well as improved parkland throughout the entire area, active travel routes to and from the city centre, allotments and public spaces.

Keepmoat Homes became the preferred developer after a competitive dialogue process, with two excellent final bids submitted in August before the final decision in late September.

Tom Barclay, Wheatley Group Director of Property and Development, said: “The new mid-market development helps us increase the supply of much-needed affordable homes in the city and will be a key part in the transformation of the area. It’s an exciting time for Sighthill and we’ll be working closely with the local community and our partners at the city council and the Scottish Government as the plans progress.”

Sighthill and Glasgow will also gain from this regeneration project through a community benefits programme from Keepmoat Homes that will deliver 62 new jobs through modern apprenticeships, graduates and new entrants; 45 new jobs on the construction project; support for 46 existing apprenticeships; and 82 work placements.

This community benefits programme will also involve education and training support; a commitment to a minimum value in sub-contracts to SMEs and social enterprises; events to support the supply chain; the support of 10 disadvantaged groups over a seven-year period; and a commitment to spending at least £20,000 on local engagement through community initiatives, digital inclusion and a local development trust. 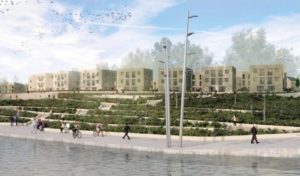 At present, the most visible sign of Sighthill’s regeneration are the 141 modern, spacious, energy-efficient homes built by GHA in 2015, and the demolition of the high-rise blocks across the site.

Other key dates to note regarding key elements of the project include the imminent completion of remediation work; the delivery of infrastructure works – including new utilities, public realm and the public park – by late 2019; the building of a new community campus school by October 2019; the construction of a new road bridge across the Glasgow-Edinburgh railway line, to be complete by late 2018; and the delivery of the M8 pedestrian bridge by late 2019.

The regeneration of Sighthill is being delivered by Transforming Communities: Glasgow, a partnership between Glasgow City Council, Glasgow Housing Association and the Scottish Government, with additional funding from the Glasgow City Region City Deal.

All renderings courtesy of Keepmoat Homes.

Learn more about the regeneration of Sighthill.