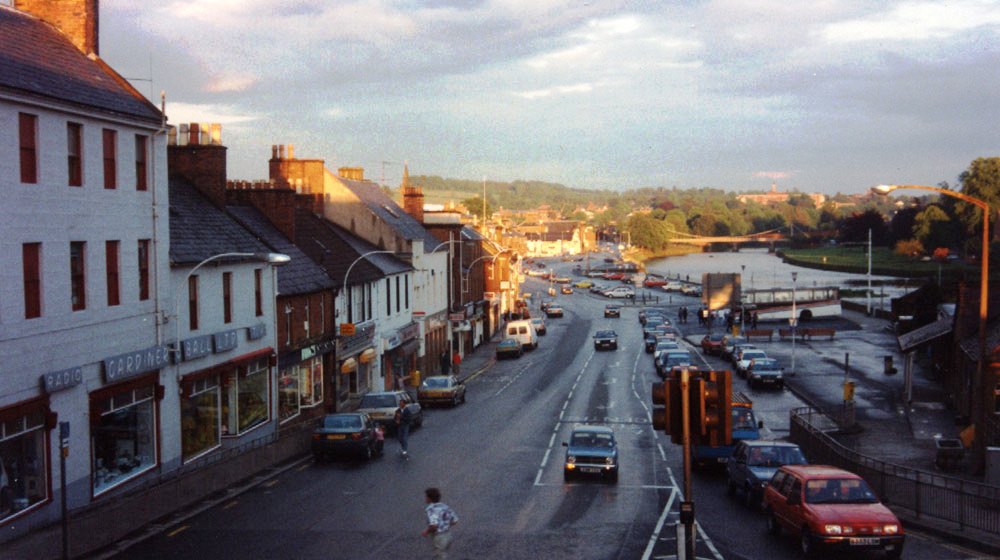 Dumfries is a market town of about 50,000 people within the Dumfries and Galloway council area of Scotland. It is located near the mouth of the River Nith into the Solway Firth. Dumfries is nicknamed Queen of the South, but the queen’s heart—its downtown—has been ailing of late. 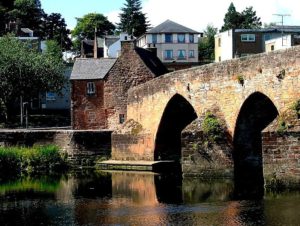 The Auld brig of Dumfries.Photo by anonymous via Wikipedia.

Dumfries is a relatively prosperous community but—like so many towns—their centre has been devitalized by sprawl and badly-planned highways.

The decline started in the 1980s with the building of the Dumfries bypass. While it succeeded in reducing downtown traffic, it did so to excess, hurting the high street merchants. The effect was exacerbated by merchants moving out of the downtown to the bypass area, to recapture their customers.

In a bid to re-stimulate development in Dumfries town centre, both economically and in a social context, several strategies have been proposed by the controlling authorities. The latest one suggests that the local council—via a non-profit arts group—should buy the high street in order to have more control over its regeneration.

A public arts organization called the Stove Network—with the backing of the Dumfries and Galloway Council and the local housing association—wants to renovate and repurpose the long-vacant, often-derelict downtown buildings.

Stove Network got the idea from successful rural land community buy-outs in places like Eigg, Assynt and Gigha, but this would be the first such urban buy-out Scotland. 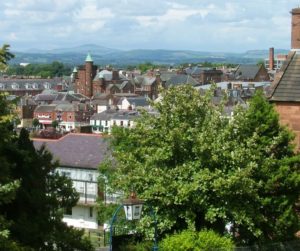 As Dumfries and Galloway Council leader Elaine Murray explained, “It does depress people if the town centre is shabby. There is so much lovely architecture here but a lot of the buildings are owned by businesses that don’t have any association with the town. The council is enthusiastic about supporting the idea that the community would own the high street around the Midsteeple area and I know the Scottish Government is also keen. In these times of austerity we simply aren’t in a position to do it all by ourselves.”

A spokesperson from the Scottish Government added, “This is an interesting and ambitious proposal. We want communities to develop the capacity to identify their aspirations and needs and to develop and deliver economic, social and environmental solutions that work for their local area. We will continue to work with partners such as Scottish Towns Partnership and SURF (Scotland’s Regeneration Network) to support regeneration in communities and contribute to the vibrancy, vitality, and viability of our town centres. This has included previous support for the Stove Network.”

SURF is Scotland’s Regeneration Forum. Its overall objective is to improve the lives and opportunities of residents in Scotland’s disadvantaged communities. To accomplish this, SURF:

The SURF network is the primary arena for debate on community regeneration in Scotland. It acts as a channel for information, consultation and policy proposals, based on the knowledge and experience of its extensive membership and wider connections.  SURF network activity includes seminars, conferences, international policy exchanges, the annual SURF Awards for Best Practice in Community Regeneration and the distribution of information and comment in a variety of formats.

Scotland’s Towns Partnership is Scotland’s largest towns’ collective; representing and promoting the diversity of the nation’s towns and places, and supporting those organisations and groups that have an interest in or ownership of them.

Their role is to act as a hub for relevant news, resources, knowledge and good practice. They support learning and Community through events, and influence and share policies that impact towns.

Featured photo by Guinnog via Wikipedia.

See article by Karin Goodwin in The Herald.