On October 8, 2019, New York City Economic Development Corporation (NYCEDC) announced the last planting of the 54 acres restoration of degraded wetlands on Staten Island’s West Shore. The start of the project was first announced here in the May 1, 2018 issue of REVITALIZATION. 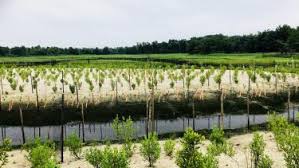 Located next to the West Shore Industrial Business Improvement District, Saw Mill Creek is a natural area between the West Shore Expressway and the Arthur Kill. The wetland suffered severe damage from historic dumping and from Hurricane Sandy undermining the site’s ecological function.

Through this restoration project, which broke ground in 2017, more than 40,000 cubic yards of debris were removed from tidal wetlands, marshlands and mudflats that make up the Saw Mill Creek watershed, creating a net increase of 24 acres of wetlands.

“NYCEDC is proud to deliver the Saw Mill Creek Mitigation Bank project, which has been successful in restoring and protecting Staten Island’s valuable wetlands,” said NYCEDC President and CEO James Patchett. “This program proves that innovative approaches to wetland restoration and coastal development are not only effective, but vital to our city’s resiliency efforts. I’d like to thank New York City Parks, the State’s Department of Conservation and Regional Economic Development Grant Councils, the U.S. Army Corps of Engineers, the Hudson River Foundation’s Harbor Estuary Program, the Waterfront Alliance and our community partners for championing this effort and who helped make this project possible.” 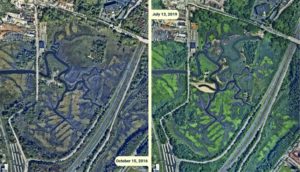 “The restoration of Saw Mill Creek Marsh and establishment of the mitigation bank will improve water quality, provide a healthy habitat for wildlife and revitalize the city’s waterfront. We are grateful to NYCEDC for leading this project and our partners at the city, state and federal levels of government for their commitment to creating a more resilient city,” he added.

Federal and state laws require developers, infrastructure builders and property owners seeking to develop or repair waterfront property to undertake restoration projects to mitigate the potential harm to waterway ecosystems. In a dense urban environment like New York City, finding acceptable sites for individual projects to offset construction impacts is difficult and can add years for construction and permitting.

Mitigation banking streamlines the restoration process, allowing project sponsors across multiple sites to buy credits from an approved bank and support the restoration of a larger piece of land, rather than seeking regulatory approval for individual, smaller mitigation projects. Mitigation banking such as the project at Saw Mill Creek represents economies of scale, and ecologies of scale, and represents the regulatory preferred form or mitigating impacts to wetlands.

The credits generated through the Saw Mill Creek pilot program have been made available to public and private developers of waterfront properties in Staten Island, Manhattan, the Bronx and portions of the Brooklyn/Queens waterfront to ensure that their projects avoided and minimized environmental impact.

Credits are now supporting project permitting for maritime businesses and needed coastal resiliency investments. In the aftermath of Hurricane Sandy, the de Blasio administration prioritized wetland restoration as a key component of the city’s rebuilding and resiliency efforts.

All images courtesy of NYCEDC.