Another $3 billion in federal funding is now available for state and local governmental entities.

This funding was allocated in the American Rescue Plan (ARPA) legislation that passed in 2021 but it took this long to design the allocation process and the funding has only recently started flowing.

The new revenue will soon create hundreds of new contracting opportunities and produce numerous and diverse types of public-private partnerships. The U.S. Economic Development Administration (EDA), a division of the Department of Commerce, is charged with oversight.

The funding is designated for initiatives that support and sustain America’s economic vitality through technology, manufacturing, innovation, and the creation of new jobs.

One of the divisions that selects funding recipients has $1 billion now to allot through a program called the Build Back Better Regional Challenge (BBBRC). The EDA says this program has the largest, nationally run regional economic development competition ever and every part of the country is expected to participate.

Recently, some of the first awards representing up to $65 million were announced for economic development programs in a number of states.

One recent award of $40 million went to the West Texas Aerospace and Defense (A&D) Cluster program. That initiative is being led by the University of Texas at El Paso.

The goal is to create an advanced manufacturing district and the focus will be on delivering physical and cybersecurity infrastructure to small and emerging firms. An additional $40 million in funding has also been raised for this effort. This work will produce the adoption of advanced manufacturing technologies, shorten supply chains, enable sustainable approaches to mass production, and support new jobs. 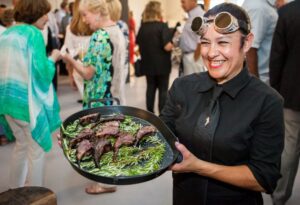 Another funded initiative in the Fresno-Merced region of California received $65 million recently. This effort is known as the Future of Food Program, and it will be led by the Central Valley Community Foundation.

The effort will include projects designed to create a new hub of ag-tech research and innovation in a region that produces 25 percent of the nation’s food supply.

The plan includes incentives to attract an additional $250 million in private investment and to create more than 10,000 quality jobs that pay 60 percent higher wages than current low-skilled jobs.

One of the first activities will be a construction and renovation project to create a headquarters facility. Approximately $15 million is budgeted and a Fresno location has been designated.

The project will be overseen by the University of California at Merced (UCM), and it will focus on renovating a 65,000-square-foot historic building that will become the focal point for agrifood technology and engineering innovations.

The state of New Hampshire was awarded $44 million for a Biofabrication Cluster program that will be overseen by the city of Manchester. A cluster of projects are being scoped to support production and distribution of regenerative tissues and organs.

The projects will include development of a facility scaled for regenerative tissue and organ production, a new regional business accelerator, and a logistics network of pilot stations that will facilitate organ distribution.

New Hampshire was also awarded $29 million to construct a Teaching Airport with the capability of increasing the number of certified aviation maintenance technicians and facilitating the emergence of aviation innovations in advanced aerial manufacturing.

A funding allocation of $25 million was awarded to Western New York for an advanced manufacturing program that will be led by the Empire State Development Corporation.

This initiative will focus new investment in an economically distressed part of Buffalo, New York. The program will support advanced manufacturing in the region and accelerate transformation of the existing Northland Corridor into a hub for advanced manufacturing. Funding is also available for construction of a microgrid.

There are many additional projects on the launch pad. In Oregon, a coalition led by the Port of Portland was awarded $41.4 million for an initiative that will accelerate affordable housing production while also restoring forest lands.

In Alaska, the Southeast Conference organization will lead a cluster of projects to support a sustainable mariculture industry. The objective will be to use the $49 million in funding to produce shellfish and seaweed to benefit Alaska’s economy and also create jobs.

As new initiatives are approved for funding, it is worth the effort to watch for ongoing announcements. Every region of the country will likely benefit from these types of investments and America may not see a federal investment of this size for economic recovery for generations to come.

A coalition of leading universities in Pennsylvania along with private sector partners will lead a $62 million effort to supercharge the state’s robotics and autonomy capabilities. The initiative will include 11 counties, including the regions rural and coal-impacted communities and boost the economy in those communities as well.

These projects will not launch immediately as most are still in the design stage, but coalitions and partnerships are being formed so interested parties should note that the timing is perfect to seek inclusion now.

All regions throughout the U.S. are expected to get funding allocations from this program so it is possible to monitor new awards from the Build Back Better program through the U.S. Economic Development Administration.

It is doubtful that the federal government will allocate another level of funding of this size to support economic development in America for generations to come.