In Genoa, Italy, the Ponte Morandi (English: Morandi Bridge) was a road viaduct on the A10 motorway, built between 1963 and 1967 by the distinguished engineer Riccardo Morandi. The Polcevera River runs under the bridge, which was a famous piece of engineering and architectural history. The bridge formed a major link between Italy and France. 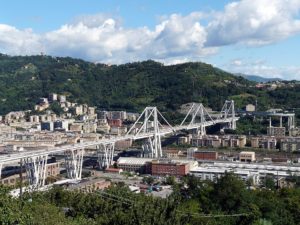 The Morandi Bridge in 2010.Photo by Davide Papalini via Wikipedia.

On August 14, 2018, a 210 meter (690 ft) section of the viaduct collapsed, killing 43 people who were crossing the bridge at the time. The collapse is suspected to have been caused by corrosion in the cable stays that supported the bridge decks, but over a year later there was no official reason for the collapse. In the meantime, the viaduct has been completely demolished.

Now, the urban redevelopment project, named “The Polcevera Park and The Red Circle” has been thought out as a system of parks with different ecologies and infrastructures for sustainable mobility and smart buildings for R&D and manufacturing with the aim of reversing the current image of the Polcevera Valley, from a complex and tragically devastated place to a territory of sustainable innovation for the rejuvenation of Genoa itself.

A team led by architect Stefano Boeri has won the competition to design the bridge’s replacement, and a public park on the site at its base.

Here how Boeri describes the team’s approach, and the key points of the project: “A Red Steel Circle. A ring that embraces – passing under the new bridge – an area made of iron, water, cement and asphalt. The “Red Circle” symbolizing the powerful local tradition of blast furnaces, cranes, and overhead cranes, runs along the locations where the tragedy of 14 August 2018 occurred. It embraces them without separating them from their context, linking them together, […] joining the separate sections through bike/pedestrian path and distributing the renewable energy generated by the solar collectors – thermal and photovoltaic – located on the roofs of the buildings, by the Wind Tower and by the piezoelectric flooring (which symbolically contribute to the energy balance) converting into energy the traffic flows that run through the new Bridge and the Circle. Energy and movement that flow into the Wind Tower.”

The Red Steel Circle—a symbolic element and embodiment of the “urban sewing” of the two sides of the valley—develops changing its nature: it becomes a walkway, a raised square, an access and exit ramp, a corridor between the buildings or an underground path and connects all the different territories, highlighting the great urban botanical park: the Polcevera Park. A new regenerated site will run under the new bridge, designed by Renzo Piano.

“Rebuilding from an architectural and urban point of view but above all from a social point of view. For this reason, the rebirth called for a project that first and foremost would be a hymn to life. Joyful, with quality services, designed primarily for people, people who live and work there. We strongly wanted the vision to embody the colors and scents of the Mediterranean, of which Genoa is a symbol in the world. In fact, the goal is to rebuild a cohesive urban system, socially active, innovative so as to revitalize not just the area but also the neighboring ones by turning it into an attraction. The architectural project proposed consists of the design of World Buildings that is large clusters of buildings with a multi-functional role and a streamlined yet recognizable architectural language. Inspired by industrial architecture and the blue color of the Mediterranean, the new buildings are built with sustainable materials and the large roofs offer surfaces for the production of renewable energy. The buildings open up to the park and are intersected and connected by the Red Circle,” explained Andrea Boschetti, founding partner of Milan-based Metrogramma.

The Red Steel Circle is first and foremost a relationship-building structure: it’s a bike-pedestrian road 1570 meters long, 6 meters wide and 250 meters radius, equipped with a 120-meter-high Wind Tower for the production and distribution of renewable energy that connects the district just in front of the new station. The latter houses a system of wind turbines and belongs, like the Red Circle, to the new energy network of Polcevera created thanks to the contribution of the German firm Transsolar.

The Red Circle is part of a sustainable mobility grid where bike and pedestrian paths, smart mobility lanes, shared surfaces and intelligent parking spaces all come together inside a strategy developed with MIC | Mobility in Chain, with the goal of creating a safe public space on a human scale.

The Polcevera Park, basically consists of a system of parks that gather in the overall vision the variety of plants and trees typical of the Mediterranean basin, designed by Inside Outside | Petra Blaisse and built with the contribution of agronomist and landscape designer Laura Gatti and geologist Secondo Antonio Accotto.

“The landscape project presents itself as a structure of parallel stripes that organises the entire site, giving rise to a botanical park where each strip, whose width varies from 7 to 20 meters and is marked by an aligned path, represents a different type of garden, thus increasing the degree of biodiversity of the entire area. And of the experiences for the citizens through the typologies themselves and the equipment (it will be possible to use recreational, educational and socialisation areas as for playing sports, collecting flowers and fruits, using animal dedicated areas). Running perpendicular to the linear gardens there is a further zig-zag path that becomes the only connection between East and West until one reaches the Red Circle that intersects all the stripes and creates connections that were previously impossible, allowing cyclists and pedestrians to move everywhere with previously unimaginable ease,” said Petra Blaisse of the Inside Outside studio in the Netherlands.

“The Red Circle, together with this system of paths puts available in a very efficient way all the green spaces and areas of the Park, giving to citizens and visitors an experience of the landscape that is both beautiful and intimate […]. All green areas and the squares will be created so as to absorb rainwater, extra water will be collected and used for irrigation and such. The efficiency of this new landscape does not only have a practical function such as the sustainability of the water management, but also embodies the symbolic value of Genoa’s comeback after the Morandi Bridge tragedy,” she added.

In the heart of the Park stands Genova in the wood: an art installation featuring 43 trees, designed by artist Luca Vitone, dedicated to the memory of the victims of the collapsed Morandi bridge as well as to the timeless memory of the pain and faults of mankind but, at the same time, a symbol of the indomitable strength of a city.

“Each tree will be dedicated to a Ligurian figure from every period of the cultural scene from Montale to Pivano, Germi, Villaggio, Strozzi, Scanavino, Alberti all the way to Coppedé. Figures that were born in the region or that have found in the region the right environment for their growth, individuals who, with their imagination, were able to contribute and export in the world the image of Genoa and Liguria. Each name of the author will be hidden by its anagram that will give the title to the plant and it will be up to the visitor, as in any puzzle game, to discover the person to whom the tree is dedicated. Paths that can be freely explored inside the “Forest”, where benches with peculiar shapes, such as wheels or crosses make the perfect place to read and rest in the shade of the trees. Visitor’s curiosity will be satisfied by the botanical data sheets – symbolic – biographies that for each tree/author will have an explanation of the affinity, pairing and relations. This information, with the related anagram solution, will be available through an app designed on purpose for the project. Also, a library is planned dedicated to books on botany and on the authors who are protagonists of the Forest,” says Vitone.

The Parco del Polcevera will become a new centre: all around it, the district will be reborn, understood as a community of life, relationships and exchanges. The BIC buildings in the Green Factory area, the New Forts and the ex Mercato Ovaivicolo become new hubs of productivity and innovation, essential ingredients for a sustainable rebirth also from the economic-financial point of view as studied in depth by H&A Associati.

The project will be built through an open participatory process (for the month of October 2019), with the active involvement of the administration, inhabitants and other local stakeholders. Called “The Polcevera Table 2.0”, it will be a tool that will accompany all phases of the work, from the design to the construction, also using tools such as temporary structures for the start, implementation and finalization of the process, as defined in the tender by Temporiuso.

“The Red Circle, the Tower, the World Buildings, and the Polcevera Park with its vital chromatic and botanical variety will act as Genoa’s welcome to the passers-by of the future,” concludes Boeri. “A welcome to the world that crosses it and reaches Genoa from a network of infrastructure that stretches from east to west connecting Italy to Europe, parks perched on vertical walls, workers and noblewomen, singers-poets and naval engineers. A Superb City, even though it is afflicted by poignant melancholy; beautiful, even if in the harshness of its everlasting contradictions. A city of steel and sea, sculpted by wind and tragedy, but always able to stand tall.”