Our aging cities are badly in need of regeneration.

Many established residential areas, the “greyfields,” are becoming physically, technologically and environmentally obsolete. They are typically located in low-density, car-dependent middle suburbs developed in the mid to late 20th century.

Compared to the outer suburbs, these middle suburbs are rich in services, amenities and jobs.

But the greyfields also represent economically outdated, failing or undercapitalized real-estate assets. Their location has made them the focus of suburban backyard infill development.

Unfortunately, the current approach typically cuts down all the trees and creates more car traffic as resident numbers grow.

A new kind of urban regeneration is needed at the scale of precincts, rather than lot by lot, to transform the greyfields into more livable and sustainable suburbs. It calls for a collaborative approach by federal, state and local governments.

How do we do this?

Our free new e-book, Greening the Greyfields, sets out how to do this. It draws on ten years of research that led to a new model of urban development.

Greening greyfields will help our cities make the transition to net zero emissions.<

Why do we need to regenerate these areas? 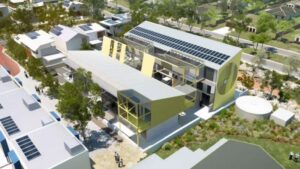 WGV in Fremantle is a model project for precinct-scale greening of the greyfields.

We need to shrink the unsustainable urban and ecological footprints of “suburban” cities.

Neighborhoods need to become more resilient, sustainable, livable and equitable for their residents.

Urban regeneration must also allow for the COVID-driven restructuring of the work–residence relationship for city residents. This involves relocalizing urban places so they become more self-sufficient as “20-minute neighborhoods.”

Their residents will have access to most of the services they need via low-emission cycling and walking, as well as public transport.

Current attempts to increase residential density and limit sprawl in most Australian cities tend to focus on blanket up-zoning in selected growth zones. The resulting backyard infill involves a few small homes, which is all that is allowed on each block.

Density increases only marginally, so there are still too few housing options for residents who want to be close to city services and opportunities.

Piecemeal infill redevelopment often degrades the quality of our suburbs. The loss of trees and increase in hard surfaces worsen urban heat island effects and flood risk. And a lack of convenient transport options for the extra residents reinforces car dependence.

Why do this at the precinct scale?

Urban regeneration is best tackled at the scale of precincts. They are the building blocks of cities: greenfield sites continue to be developed, and old brownfield industrial sites are redeveloped, at this scale.

Model precincts like WGV, in a greyfields suburb of Fremantle, have very successfully demonstrated how regeneration can produce high-quality, medium-density housing and net-zero outcomes.

However, this development was on an old school site, so there was no need to combine individual blocks into a precinct-scale site.

There were also no residents that needed to be engaged—though WGV became very popular because of its attractive architecture and treed green spaces.

What are the key elements of this model?

An overview of trackless tram projects around Australia.

Mid-tier transit like trackless trams is an ideal way to enable precinct developments along main road corridors. Local governments are recognizing this around Australia.

Greyfield regeneration can begin with a strategy of district greenlining. Redlining was an American planning tool to exclude people of color from a neighborhood. Greenlining is the opposite: it includes the whole community in greening their neighborhood.

This strategic process would identify neighborhoods in need of next-generation infrastructure. Projects of this sort require a precinct-scale vision and plan.

State and municipal agencies can do this work. It would include: 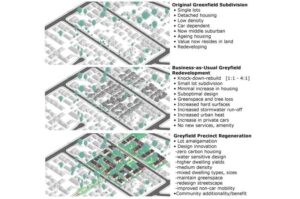 The City of Maroondah in Victoria, Australia provided an early demonstration of how this can happen.

It produced a set of playbooks to show how other municipalities, developers and land owners can replicate the process.

Greening the greyfields will deliver the many benefits associated with more sustainable and liveable communities.

However, these outcomes depend on more comprehensive, design-led, integrated land use and transport planning.

Property owners, councils, developers and financiers will have to work together much more closely and effectively than happens with the business-as-usual approach of fragmented, small-lot infill, which is failing dismally.

New laws and regulations will be needed to change this approach.

Precinct-based projects offer a model for net zero development of our cities.

Greyfield regeneration is an increasingly pervasive and pressing challenge for our cities. It calls for all levels of government to work on a strategic response.

We suggest a Better Cities 2.0 program, led by the federal government, to establish greyfield precinct regeneration authorities in major cities and build partnerships with all major urban stakeholders. It would set us on the path to greening the greyfields.

All “Greening the Greyfields” images are provided by the authors. Featured image shows redevelopment in the City of Maroondah.