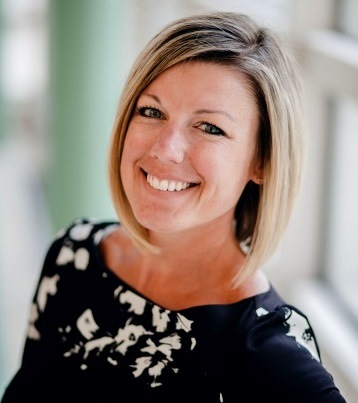 The Guest Article for REVITALIZATION was written by Melissa Dodd.

Bellbrook, Ohio is a community in the southwest part of the state. Only 15 miles from Dayton, it offers small town life while being close to just about everything in a short drive. The community tagline is “small town friendly” and it lives up to that very title.

The community of 7,200 once had a thriving downtown that had a grocery, hardware store, chocolate shop, toy store, busy restaurants and more. In the early 1990’s the township started to develop around an interstate connection that was built. Big box retail and fast food chains filled in the spaces around the newly built strip mall of other national brand stores. 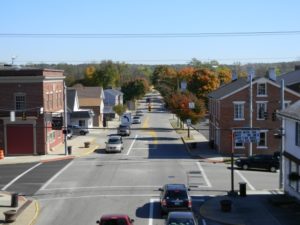 The one-mile stretch of Wilmington Pike that was once rural is now a busy four lane road ushering speeding vehicles from their homes to the interstate and back every day with stops at the various national chains to get a bite to eat, a gallon of paint or anything else they need.

Unfortunately, this exact scenario has played out all over the country. Downtowns everywhere have suffered from sprawl. Their small businesses couldn’t compete with the big box stores just a short five minute drive away. Stores closed and buildings sat vacant.

This phenomenon is not unique, but it is still challenging nonetheless. Each community is faced with their own unique set of circumstances. Bellbrook is no different. Bellbrook is one of only three communities without an income tax in the state of Ohio. What is usually the largest source of revenue for all of our neighboring cities and villages has just not been an option for us. So we do more with less. It’s one thing to keep the police cruisers gassed up, it’s another to devote the small amount of resources we have to restore our downtown to the busy center of the community it used to be.

Where do we even start? This was the million dollar question. Upon my hire as City Manager in April of 2018, I came to the table with a vision. I had come from a neighboring community that was not only vibrant but an actual area tourist attraction due to its bustling center with diverse shops, eateries and events. It is my belief that City Council thought I could bring some of that magic with me.

Luckily, I was up for the challenge and that very challenge was what led me to leave a position I was comfortable in to come to a community that needed help. I was no expert, but I knew I could figure it out, or I would die trying. 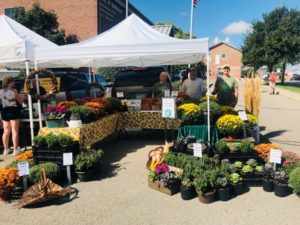 I recall that early summer I had the idea to start a farmers market. I knew that it wouldn’t cost the city a nickel and would only require my own time. I immediately got to work locating and messaging potential vendors in the evenings and before long, our first pilot market was held in September of 2018. We had filled every booth with diverse, local offerings. The weather was perfect, the community turned out and it was a success!

In the back of my mind, I thought that City Council had to have thought I was crazy. Never before had their City Manager organized, let alone, ran a farmers market. It was totally outside of the box that was my job description. But it filled a void downtown. It made the community get outside, walk downtown, shop local, engage with their friends and neighbors and just enjoy the perfect weather.

THIS is what the downtown was missing. Not that it was missing a farmers market specifically, it was missing the opportunity for the community to gather and connect. This is the very core of small town friendly and we were missing this in our community until now. I immediately went to work and organized one a few weeks later. It is now held the second and fourth Saturdays of each month and still very successful. I was pretty sure I was on to something! 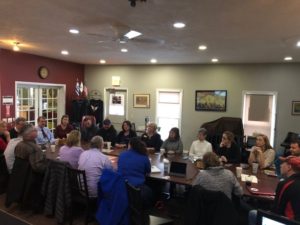 One of the other things that I noticed was that there were no strong connections with the city and the business community. I started to attend Chamber of Commerce meetings and quickly realized that their focus was spread between Bellbrook and the Township. With the Township being a completely different composition with different needs, this seemed like Bellbrook and its small businesses weren’t necessarily getting the support that I thought that they should. I also realized that the Chamber was run by a part time person who was dedicated, but stretched entirely too thin.

I voiced my concerns at a chamber board meeting and a young business owner heard me and followed up with me. We started to collaborate on a way to bring the Bellbrook business community together and For Bellbrook By Bellbrook was quickly formed under the business owner’s leadership. This group meets once a week for an hour at a downtown coffee shop to network, hear from various presenters on topics such as marketing, social media and more.

The group has been meeting since January of 2019 and has a steady group of around 20-25 that attend every week. This connection and bond in the business community was missing and this was the perfect outlet to bring them together and get to know each other. I make it to every meeting I can to stay connected and be a conduit between the City and the local business community. These relationships have been extremely beneficial to all of us and the weekly meeting is one that we all look forward to.

In the summer of 2019 we brought a consultant in to give us recommendations on our downtown. Many of the recommendations were simply reinforcement of things we were already doing. It was validation that community should be at the very heart of what we were doing. There were two large community presentations where over 100 community members gathered to hear what the consultant had to say. 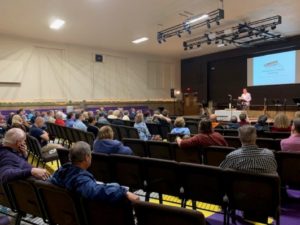 This engagement was a surprise to many and a sure sign that people were interested in what was going on. The most important outcome to the community hearing from an outsider was the recommendation to form a community organization whose purpose was to better the quality of life in the community. Immediately, several business owners and residents eagerly put their hands in the air to be part of this type of group.

This is how Bellbrook by Design was formed. It is a newly formed seven member board whose mission is to “maintain and promote Bellbrook’s family oriented small-town charm and foster motivated teams to implement creative strategies that enhance the Bellbrook community.

It started to become very apparent to me that connecting people is the key to renewing the community and in turn, the downtown. The focus really turned to trying to answer the question of “how do we bring people together in our downtown”. We all know that events are the way to do this and regular events that people can depend on and look forward to are key.

For Bellbrook By Bellbrook collaborated to create Second Saturday Street Fairs in Bellbrook Plaza downtown. These events were held in the evenings and featured craft vendors, food trucks, kid friendly activities and live music. The events ran from May through September and each event was better attended than the last.

The Plaza then started to change shape as a result. The property owner, a longtime resident and business owner, began to have a new excitement toward his property. He closed a dangerous alley where cars would whip past a line of children waiting to get their ice cream after school at the Dairy Shed. He made that same old alley an outdoor dining space. 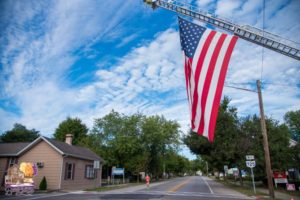 The entire parking lot got repaved, flowers were planted, benches built and even the old Dairy Shed building got a fresh coat of paint. There was certainly a buzz in the air that was contagious.

As the Street Fairs and farmers markets continued, the next events started to be planned. Bellbrook is a very health minded community. The city was actually founded on the fact that a river ran through the community which was thought to have healing properties. This piece of heritage is something that we keep in mind when planning our events. The next event to be planned was a 10k race and a health and wellness festival that would coincide with the regular farmers market.

These two events cost the city only the staff time and both were huge successes. The 10k was a partnership with a local event production company who handled all of the logistics and marketing. The race sold out and brought 300 runners through the heart of our downtown on a beautiful fall day.

Racers and spectators enjoyed the farmers market and were also able to visit a number of health and wellness related vendors that lined our main thoroughfare through town. Again, the feedback was very positive and proof that we really were on to something. 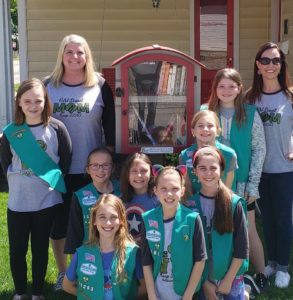 With that sense of community comes pride. We have noticed that these small things have sparked renewed interest in the look of our community. People are putting fresh coats of paint on things that were overdue. The flowers are getting watered more regularly. People are starting to come together to support the common thread which is making our community better.

The moral of the story is that you don’t have to have economic development incentives or a big developer to come in and restore an entire city block to make a difference (although it would certainly help). Sometimes it starts with the small things that will eventually bring the bigger changes.

Bellbrook is certainly a community to watch. The community has a renewed passion and excitement for its future. This is an unstoppable group of people who are going to change the way we think about revitalization by focusing on the very thing that makes us special, the people who make Bellbrook “small town friendly”. 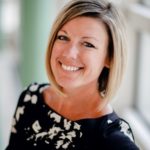 Melissa Dodd is the City Manager for the City of Bellbrook, Ohio. She is a lifelong resident of Greene County, where Bellbrook is located.

She currently resides in Xenia, Ohio along with her husband Dalton and almost 3 year old daughter, Stella. You can contact here at M.Dodd@cityofbellbrook.org