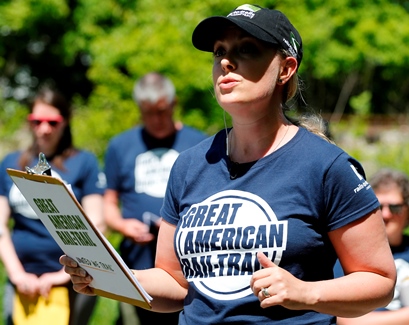 This Guest Article for REVITALIZATION is by Brandi Horton, VP of the Rails-to-Trails Conservancy.

After the Civil War, the region now known as the Quad Cities began to gain a common identity. By World War I, the towns of Davenport, Iowa plus Rock Island and Moline in Illinois had begun to style themselves as the “Tri-Cities,” a cluster of three more-or-less equally-sized river communities growing around the small bend of the Mississippi River where it flows west. But with the growth of East Moline, Illinois during the 1930s, the term “Quad Cities” came into vogue, as this city was given equal status.

Over the U.S. Congress’ August 2019 recess, a few of my colleagues and I packed our bags and headed to the Quad Cities to explore an important segment of the Great American Rail-Trail…the spot where it crosses over the Mississippi River. 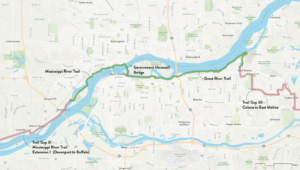 While we were there, we had a big agenda.

Our goal was to make it clear to the region’s local and state elected officials, members of Congress, businesses and residents just how transformative trails can be when gaps are closed and seamless trail networks created.

What’s more, we wanted to underscore the opportunity we have to fill those gaps by putting public funds to work in ways that are efficient and strategic.

“Now is an important time for trails, active transportation and the outdoor economy,” said Patrick Wojahn, Rails-to-Trails Conservancy’s director of government relations, at the event. “The nation stands ready to complete vital trail connections. There are more than 36,000 miles of trails nationwide, and the vision of the Great American Rail-Trail is inspiring new energy in trail development.” 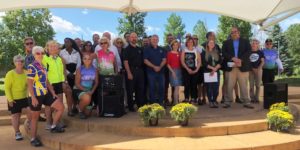 In response to the unanimous, bipartisan vote in July by the Senate Environment and Public Works Committee to pass America’s Transportation Infrastructure Act (ATIA) of 2019, RTC called for Congress to be bold. ATIA largely reinforces the status quo—with dedicated funding for walking and bicycling infrastructure continuing to represent only about 2% of the surface transportation budget with little policy direction to focus those investments on filling critical infrastructure gaps.

We are pushing for more transformative ways to align the nation’s surface transportation investment with evolving transportation patterns and needs of Americans.

“As Congress debates the next iteration of the federal transportation bill before funding expires in 2020, it’s critical that they prioritize investment in trails and encourage connectivity and active transportation, all while supporting the burgeoning outdoor recreation economy—the country’s fastest-growing economic sector,” explained Wojahn. 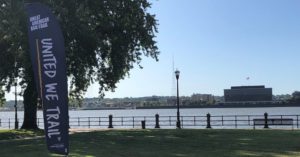 And while Congress has the opportunity to move forward a visionary transportation reauthorization bill, Iowa stands ready to take the next step on the Natural Resources and Outdoor Recreation Trust Fund, a permanent and protected funding source that was created in 2010 and has the potential to direct resources to a myriad of initiatives that improve water quality, protect soil, enhance wildlife habitat and increase outdoor recreation statewide—including trails.

Although the majority of Iowans voted to pass the constitutional amendment creating the fund, it remains empty pending a decision by the state legislature and governor to approve a sales tax increase that would provide the needed revenue.

“INHF is a proud leader of efforts to complete and connect trails in Iowa—we believe that trails are essential to people and places because they provide new connections to nature, places to be outside and physically active, and opportunities to generate new economic strategies for all types of communities,” said Anna Gray, public policy director for INHF.

“The Outdoor Recreation Trust Fund is a vital tool that—when funded—will provide dedicated, protected resources that can be used to close critical trail gaps and hasten the completion of projects that will be powerful for Iowa, like the Great American Rail-Trail,” she added.

In the Quad Cities, communities and local partners are working together with RTC to build networks of trails that safely connect people by bike or on foot to places within their communities, while also completing trail spines that build connections across counties, regions and states. 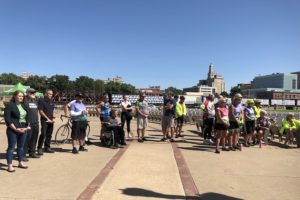 Both the Riverfront Trail and the Great River Trail are key segments of the Great American Rail-Trail, which will transform the nation, bringing tourism, economic and transportation benefits to the communities it connects.

Mayors Bob Gallagher of Bettendorf, Frank Klipsch of Davenport, plus Mike Thoms of Rock Island City, and Richard Brunk, Chair of the Rock Island County Board and other local officials joined us at the celebration, which included events in Davenport, Iowa, and Moline, Illinois, and a bicycle ride led by Quad Cities Bicycle Club on the Riverfront Trail, the Arsenal Bridge and the Great River Trail.

“The vision of the Great American Rail-Trail, and what it will deliver to the Quad Cities regional destination is powerful, meaningful and will drive our future tourism experience,” said Dave Herrell, president and CEO of Visit Quad Cities.

All images are courtesy Rails-to-Trails Conservancy. 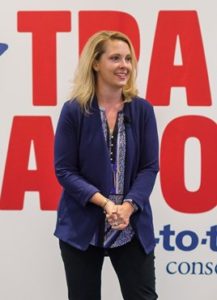 Brandi Horton serves as the Rails to Trails Conservancy’s vice president of communications.

She has dedicated her career to communications for social change and is passionate about creating communities that promote health and well-being.

She has partnered with nonprofit organizations and government agencies to leverage communications strategies to organize and engage audiences in support of social good.

She lives in Arlington, Virginia, with her family, where she regularly frequents the Four Mile Run and W&OD trails en route to work, the playground and little league games.