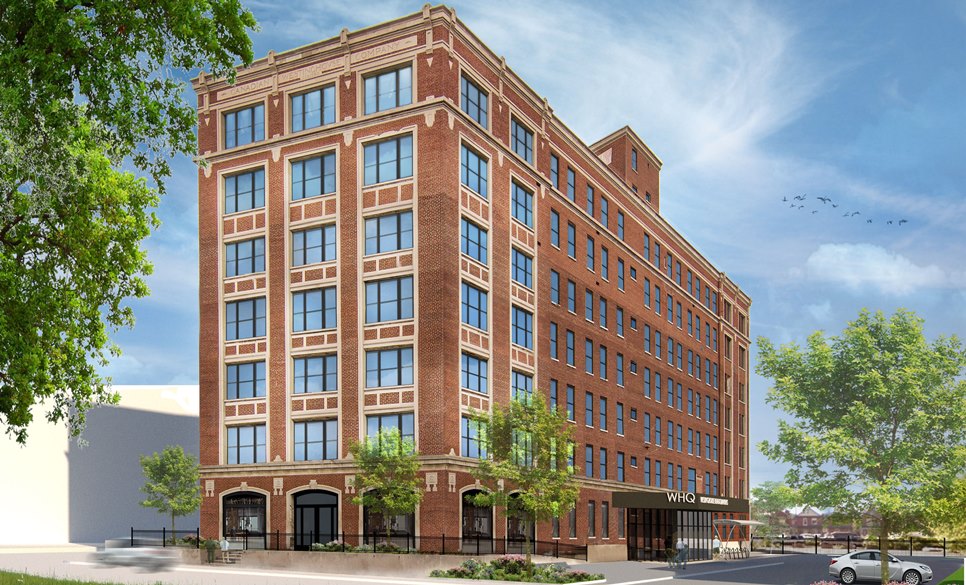 A historic landmark that once stood proud in Hamilton, Ontario, Canada and defined its east end is set to become a new energetic hub for commercial and cultural activities, and a blueprint for urban neighborhood revival. 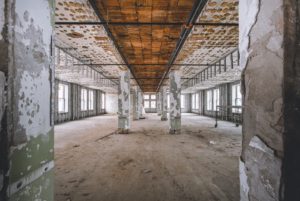 Interior – in the early stages of renovation.

Westinghouse HQ, once the Canadian headquarters for electrical manufacturer Westinghouse Company, has become a legacy on Sanford Avenue over its life of more than 100 years. It’s become an embodiment of this dynamic neighborhood, wedged between the industrial waterfront and bustling downtown.

Converted into 80,000 sq. ft. of Class A commercial space, including a 10,000 sq. ft. ground floor event space and auditorium, the historic seven-storey building will be ushered into the modern era with new finishes and systems, including photo-sensors, solar panels and heating systems.

Originally built in 1917, countless architectural features have been discovered, including marble flooring, intricate crown moldings, mosaic tiles and gigantic steel trusses – all of which are preserved and enhanced throughout the building. 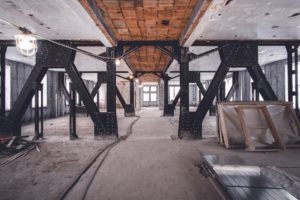 “We understand the significance of Westinghouse HQ to Hamilton, and its power to assist in the transformation of the East End, which is why we have been proud a supporter since the beginning,” says Glen Norton, Director of Economic Development at the City of Hamilton.

Meir Dick, Founder of Electric City Developments, is spearheading the adaptive reuse project. With a background in startups focused on positive social impact, he wanted to create something that brings long-term value to its community.

“The building has a magnetic energy to it you can’t ignore. People inside and outside the city have a connection to it,” says Dick, who also sits on the Barton Village BIA Board of Directors. “We consider ourselves as custodians of the building with a duty to preserve not only its architecture, but its history and its significance to the community.”

As a testament to the building’s emotional pull, Westinghouse HQ is co-funded by local Hamilton investors who wanted to add their weight to its revival. 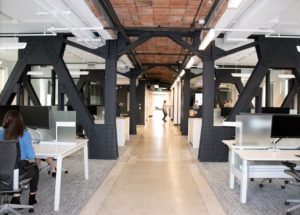 “Growing up in Hamilton, I’ve always admired the architecture of the building, and knew I wanted to be a part of its transformation. Having the opportunity to do so now is very fulfilling,” says Ray Hutton, investor in Westinghouse HQ and Vice-President of Collyer Benson.

With Equal Parts Hospitality enlisted as partners to manage the entire ground floor venue and auditorium, Westinghouse HQ will serve a bigger purpose as well: a connective tissue that supports local arts, innovation and economy.

Doubling as a community hub, Westinghouse HQ will be open to the public to book for events ranging from pop-up art galleries to concerts. There will also be picnic baskets available in summer months for neighbours to enjoy at the adjacent Woodlands Park.

“We saw Westinghouse HQ as an exceptional heritage opportunity for events and conferences, as well as the neighbourhood,” says Jason Cassis, CEO of Equal Parts Hospitality. “We are fitting up the space with a European boutique hotel lobby aesthetic and aiming for a collision of old meets new – something really unique for the lower city.” 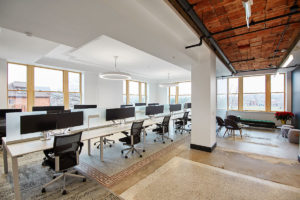 Equipped with all the right ingredients, Westinghouse HQ is attracting tenants who not only want to be in a beautiful and adaptable space, but also want to invest in community-building and placemaking.

Its first anchor tenant, mcCallumSather, thoughtfully adapted the space for the 21st century by embracing its original architectural features and injecting a sleek, minimalist aesthetic. mcCallumSather is also the lead architect, mechanical engineer and heritage consultant firm for Westinghouse HQ.

“We were so impressed with the building’s bones and its strong roots to the community that there was no doubt we wanted to play a role in its transformation,” says Joanne McCallum, CEO of mcCallumSather. “Our office demonstrates the thoughtful ways you can adapt this space, showing future tenants what can be achieved in this unique heritage building.”

Featured rendering shows Westinghouse HQ, which is a Class A commercial space with includes 10,000 sq. ft of ground floor event space and an auditorium. (All images courtesy of mcCallumSather, Jonathan Castellino and George Qua-Enoo.)