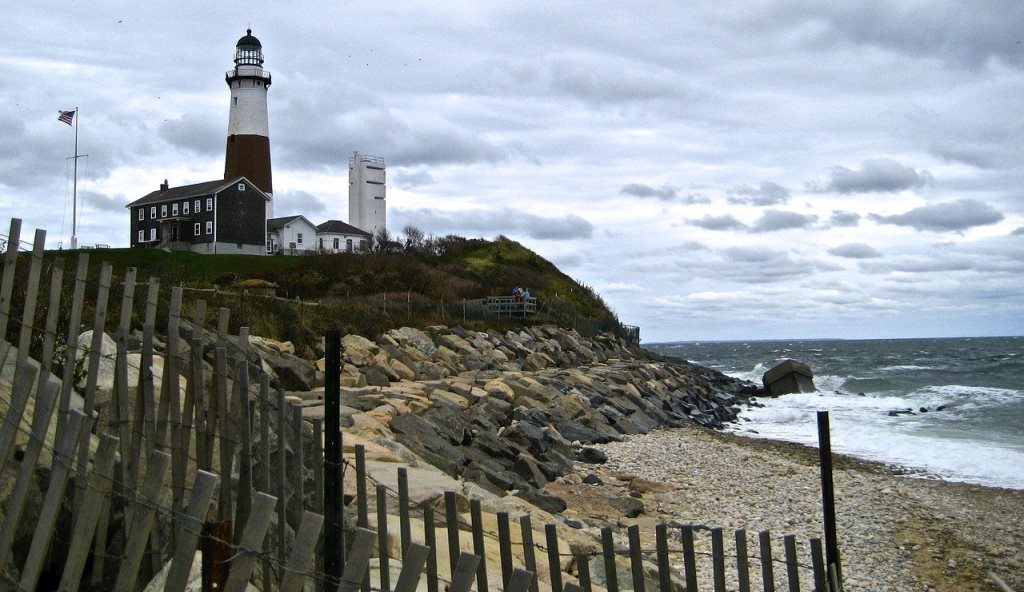 Commissioned by George Washington, the Montauk Point Lighthouse was the first lighthouse built in New York State, and is a National Historic Landmark on the Federal and State Registers of Historic Places.

Back in 1996, the U.S. Coast Guard transferred ownership of the historic Montauk Point Lighthouse site—located on the easternmost point of Long Island—to the Montauk Historical Society, which now operates and owns the property.

Now, on January 14, 2021, New York Governor Andrew M. Cuomo and the U.S. Army Corps of Engineers announced the award of a $30.7 million contract to H&L Contracting of Bay Shore, New York, to restore the grounds around the lighthouse and associated cultural resources, in order to make it more resilient to storms and sea level rise, much of it related to climate change.

“The historic Montauk Point Lighthouse is a New York treasure, but erosion and the weight of years are threatening to wash it away,” Governor Cuomo said.

“The State is committed to working with our federal partners to prevent that from happening and preserve this landmark for future generations of New Yorkers to explore and enjoy. With this development, on-the-ground work can begin this spring to advance restoration, ensuring that this George Washington-commissioned lighthouse—New York’s first—remains a beacon for all to see,” he added.

The Montauk Historical Society is dedicated to the preservation, restoration and educational development of this nationally significant landmark, and has maintained the revetment since the early 1990s. The lighthouse complex bluff is located adjacent to the Montauk Point State Park and is primarily used by fishermen, surfers, and sightseers.

The estimated two-year project to safeguard the landmark lighthouse from shoreline erosion is expected to start this spring.

“The Montauk Point Lighthouse is the historic gem of Long Island. For decades it has served as a beacon for mariners and facilitated the commerce that made New York State one of the most prosperous States in the Union. The complex nature of protecting this historic icon is a task well suited to USACE,” said Colonel Matthew Luzzatto, Commander, USACE, New York District. “We look forward to making sure this important part of American History remains a symbol of our strength and American military engineering excellence for the next 100 years.”

East Hampton Town Supervisor Peter Van Scoyoc said, “The Montauk Lighthouse is an important historic landmark as well as a Long Island icon and tourist attraction. East Hampton cherishes preserving its history, and I am happy to see this important project move forward.”

The lighthouse complex consists of the Lighthouse Tower and Keeper’s House, the Fire Control Tower, and the Garage, which served as an earlier Keeper’s House. The archaeological sites associated with the lighthouse and bluff are also part of the complex.

State Department of Environmental Conservation Commissioner Basil Seggos said, “This project is more proof of Governor Andrew Cuomo’s unwavering commitment to protecting our shorelines. The new revetment built with our partners at the U.S. Army Corps of Engineers will include access areas that will allow visitors to walk safely along the seaward side of the lighthouse.”

Costs are shared by the project’s sponsors. DEC is committing $15.4 million in NY Works funding as the project’s non-federal sponsor. The Montauk Historical Society will maintain the site after construction is complete.

“This key milestone is a testament to all the hard work done by our team at New York District in coordination with our partners at local, state, and federal levels,” said Frank Verga, Project Manager, USACE, New York District. “We anticipate getting shovels into the ground as soon as possible to start the work to preserve and protect this National Treasure.”

These investments will protect the various cultural resources associated with the lighthouse complex and help stabilize the natural environment to support the site’s continued use as a tourism attraction. Since first securing State and Federal support for the project, USACE and partners have been working to secure the project bids, project partner agreements, and access agreements for all real estate involved. Construction is expected to take approximately two years.

Greg Donohue, Director of Erosion Control for the Montauk Point Lighthouse, said, “The partnership involved in this award is an impressive coming together of civilians and government agencies who came together for the common good for this national historic landmark and this special spot in history.”

The approximately 1,000 linear feet stone revetment work consists of removing and reusing existing five- and 10-ton armor stones, placement of new 10- and 15-ton armor stones, and providing slope stabilization with terracing and vegetation above the upper crest of the revetment.

Photo of Montauk Point Lighthouse by enzol from Pixabay.