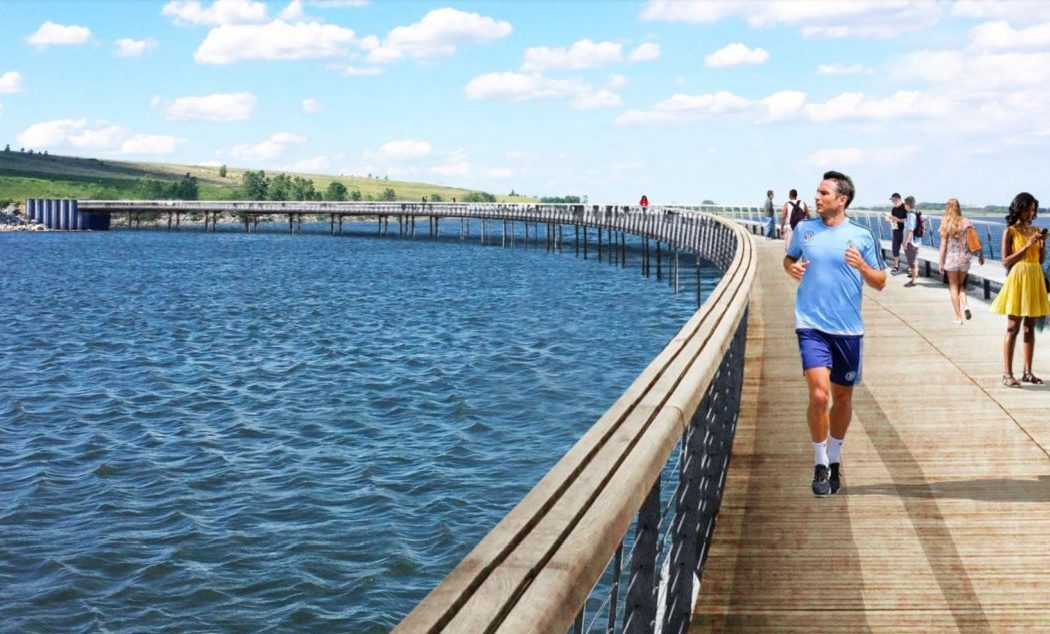 On July 2, 2019, the newest and largest public park in New York City opened on the remediated site of a huge, formerly-toxic landfill in Brooklyn. The 407-acre Shirley Chisholm State Park is on the shores of Jamaica Bay, offering a beautiful new spot for hiking, biking, fishing and picnicking.

The new park honors Congresswoman Shirley Chisholm, an educator, former representative of the 12th Congressional district in New York for seven terms and the first African American woman to run for president. The park is a signature project of Governor Andrew M. Cuomo‘s Vital Brooklyn Initiative, which calls for 34 new or improved pocket parks, community gardens, playgrounds and recreation centers within a ten-minute walk of every Central Brooklyn resident.

Standing up to 130 feet above sea level, the new park occupies some of the highest ground in the city, with panoramic views of the Empire State Building to the northwest, the Verrazano-Narrows Bridge and New York Harbor to the west, and Jamaica Bay to the south.

“Today we add another gem to our treasure trove of state parks, transforming what was once a blemish on the South Brooklyn community into exquisite open space,” Governor Cuomo said. “Shirley Chisholm fought to improve the health and wellness of underserved communities, a legacy we are carrying on through the Vital Brooklyn Initiative, so we are proud to dedicate this park in memory of her leadership and accomplishments.”

The site, which has never been open to the public, rests atop the former Pennsylvania and Fountain Avenue landfills that were operated by New York City Department of Sanitation from 1956 to 1983. After the landfills were closed, the city deeded the land to the National Park Service as part of Gateway National Recreation Area. A project to reclaim the landfills included installation of impermeable plastic and clay caps and a below-ground barrier to support potential future reuse.

“Over my career in public service, I’ve looked to Shirley Chisholm as an inspiration, a role model, and a strong woman who fought for her community,” said Lieutenant Governor Kathy Hochul. “Our work to revitalize Brooklyn takes a major step forward today with the opening of New York City’s largest state park in honor of one of the greatest women in our state’s history. Shirley Chisholm State Park is an important part of our Vital Brooklyn initiative to improve health and wellness and provide great recreational opportunities for the community.”

The park is a prime excellent example of the beneficial reuse of a formerly contaminated property. State Parks worked closely with the New York State Department of Environmental Conservation (DEC) to craft redevelopment plans that are protective of public health and the environment. DEC will continue to work closely with State Parks as subsequent phases of the park proceed in the future.

Under the initial $20 million phase, the park will provide ten miles of marked trails for hiking and biking; a bayside pier for picnicking and fishing along the park’s Pennsylvania Avenue side; and water access. Environmental educators will offer programs for children who visit the park, where partnerships are planned with environmental groups such as Audubon New York. In addition, a partnership with Bike New York will create the Shirley Chisholm State Park Bike Library, offering free loaner bikes off all sizes to ride the crushed stone trails of the park.

Department of Environmental Conservation Commissioner Basil Seggos said, “The transformation of this site into Shirley Chisholm State Park is a prime example of how New York’s cleanup of former industrial sites benefits surrounding communities. This new park will offer local residents opportunities to get outside and enjoy nature, helping to revitalize the surround community and Brooklyn’s economy.”

The park also features a colorful mural honoring Chisholm by Brooklyn muralist Danielle Mastrion. Chisholm, a Brooklyn native, was the first African American woman elected to Congress in 1968. She ran in the Democratic primary for President in 1972 as the first African American woman to seek the nation’s highest office. A decade after her death in 2005, she was awarded the Presidential Medal of Freedom by President Barack Obama.

Tom Secunda, Chair of the Jamaica Bay-Rockaway Parks Conservancy said, “The opening of Shirley Chisholm State Park marks a milestone in the resurgence of Jamaica Bay’s public parkland. This new park will offer residents and visitors much needed open space, but more importantly opens a once active landfill and source of community blight as a place where the public can now enjoy miles of trails, vistas overlooking the bay, free biking, and enjoyment of the waterfront.”

“A project like this is only possible through public-private partnership with government and non-profit organizations like the Jamaica Bay-Rockaway Parks Conservancy, ensuring that our public lands are open for use, that our waterfront is accessible and that the public is offered robust programming and amenities to meet their needs. On behalf of the Jamaica Bay-Rockaway Parks Conservancy, I commend Governor Andrew Cuomo and the State of New York for their commitment to this beautiful new park and an initial investment of $20 million to open this place to the public. We look forward to continuing to work with the state, city and federal government to ensure that Shirley Chisholm State Park continues to see investment and additional programming for all,” Secunda continued.

Under a second $20 million phase currently under design, additions to the park will include a grand entrance on Fountain Avenue; lawn patios – with one large enough for open-air community gatherings and performances; a patio overlooking Hendrix Creek; and pop-up environmental education facilities in both the Fountain and Pennsylvania Avenue sections of the park. This work should be completed in 2021.

More than 1.2 million cubic yards of clean soil – or enough to fill nearly 100,000 dump trucks – was spread up to four feet deep across the site, which was later planted with more than 35,000 trees and shrubs. The addition of prairie grass and native plants has prevented erosion and encouraged a diverse ecosystem of coastal meadows, wetlands, and woodlands that has attracted a variety of birds and other local wildlife.

“Forty years ago a vision took hold to transform a mountain of waste into a jumping-off point into the clean outdoors for hundreds of thousands of nearby residents. It took the perseverance on the part of local community leaders and the tremendous partnership of the State to make the Shirley Chisholm State Park a reality,” said Superintendent Jen Nersesian, Gateway National Recreation Area. “This park now joins other Gateway green space gems such as the Jamaica Bay Wildlife Refuge, Floyd Bennett Field, Jacob Riis Park and Fort Tilden for people to hike, bike, picnic, paddle, and just enjoy being outside.”

The Jamaica Bay Rockaway Parks Conservancy funded the initial conceptual plan to create the park. For decades, the group pushed the City to close landfills and make them into a park.