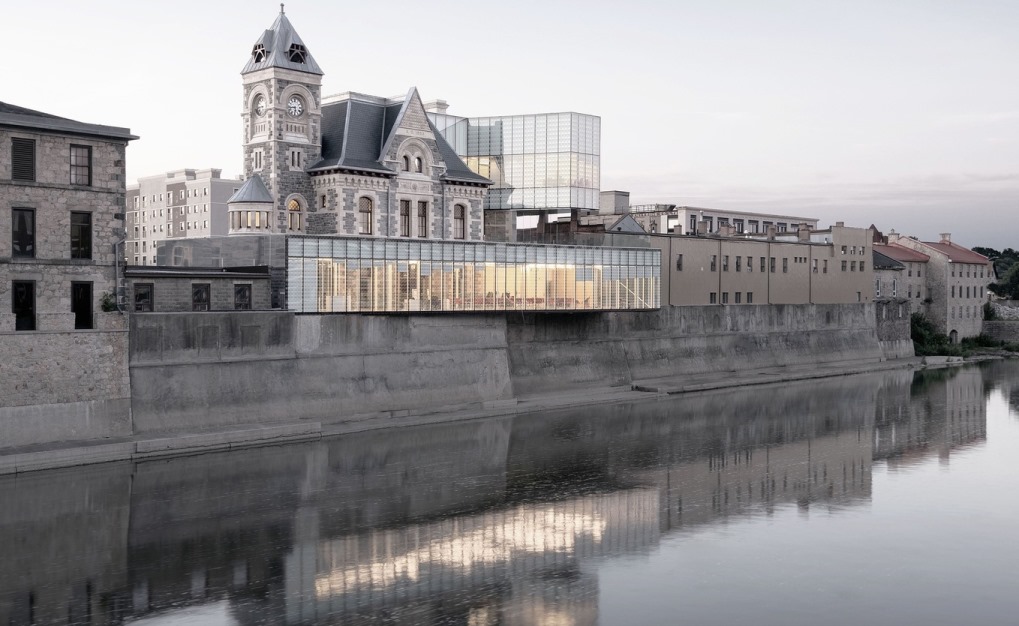 In the Canadian province of Ontario, the city of Cambridge sits at the confluence of the Grand River and the Speed River. While small, it has a rich architectural and library heritage that provided context for a revitalizing new waterfront project: repurposing and renewing an old post office into Canada’s first “bookless library.” 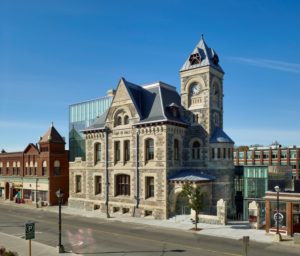 The Old Post Office is just one of a wealth of historic brick and limestone buildings lining Water Street, including a stately brick Carnegie library, one of three built in the area. These nineteenth-century libraries used classical architecture to show the value placed on knowledge and ideas.

The new library is dedicated to Makerspaces, the Idea Exchange facility that offers Cambridge residents free access to an array of spaces for learning and creativity, and a new, central hub for meeting and socializing. 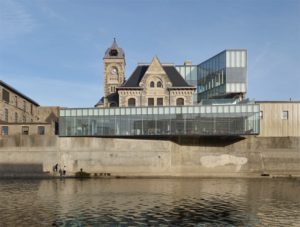 Anchored on the bank of the Grand River, the project reignites a landmark — a listed 1885 masonry post office that had fallen into serious disrepair — and adds a 9,000-square-foot transparent pavilion that wraps around the original building and stretches out over the water, revealing the conviviality within to passersby, enticing them in.

The multidimensional architecture communicates from all sides, exuding intelligence and practicality as it deftly merges old and new. RDHA achieved sophisticated forms using customized off the-shelf materials, maximizing utility, appearance and economy. Standard elements, such as drywall and strip lights, are treated with a degree of care that adds elegance. The Idea Exchange Old Post Office is an emblem of civic pride, of advances in communication technologies (in its transition from post office to digital hub), and of the corresponding transformation of the Cambridge library system, which in 2015 rebranded itself as the Idea Exchange.

A glass box entrance introduces an exhilarating progression up a feature stair adjacent to glass-walled views of the historic building, providing users with a close-up of the immaculately restored masonry while carrying them into the contemporary pavilion addition that cantilevers over the river wall. 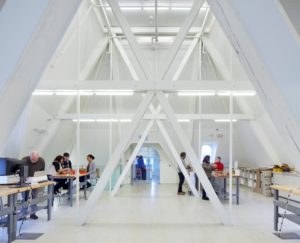 Scattered with table and lounge seating, this area offers breathtaking floor-to-ceiling views of the surroundings. Rhythmic window openings in the old building are now entrances into a fully-equipped Reading Room Cafe, accessed by bridges that echo the bridges over the river.

The openings in the floor allow natural light from skylights overhead to reach the lower level, and also connect the activities below to the heart of the building. There is care and efficiency in the details — for example, stone patterns on the façade of the heritage building inspired a custom ceramic frit pattern on the glazing that reduces solar heat gain, and the perforation frit pattern on the millwork that provides airflow to servers and heaters. Similarly, a perforated drywall ceiling absorbs sound while softening the visual uniformity of the space.

On the lower level, users can take advantage of a suite of creative studio spaces. There is a black box theatre, film and audio recording suites, laptop dispensing and gaming areas, and musical instruments are available for recording and performance.

The second level is a children’s Discovery Centre, a single large bright room equipped with smart tables, robot building kits, and built-in feature walls with Lego, Lite Brite and magnets. In keeping with the mixing of old and new, a floating glass boardroom/ teaching space and a large exterior rooftop terrace and green roof overlook the river, and also provide up-close views of the heritage building, including its newly restored slate roof. 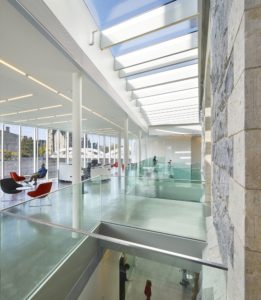 One of the greatest pleasures of the building is the attic Makerspace—an all-white space that soars to a peak, and is braced by an elegant arrangement of star-shaped steel trusses, now adapted to hold strips of lighting. Between these trusses the architects have created a fully-equipped studio outfitted with a laser cutter, 3D printers, soldering stations, vinyl cutters, irons, sewing machines, and wood and metal workshop tools.

Visitors can gaze up into the clock tower through a glass ceiling, and see its weights and gears in action. An extended glazed parapet condition at the roof level discreetly houses its mechanicals.

As they updated the building for the present, the architects were also thinking about the future. Anticipating that a river walk will eventually follow the water’s edge, they clad the soffit of the cantilever with aluminum panels, polished with a mirror-like finish, heightening the building’s relationship with its surroundings, and giving future walkers a reason to look up.

All renderings courtesy of RDHA.