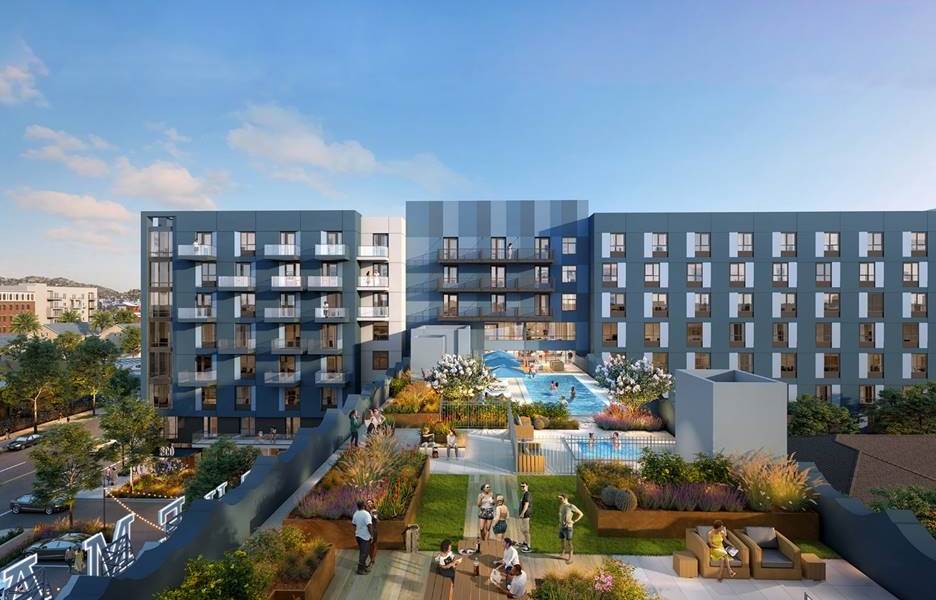 In central Los Angeles, California, a historic Art Deco parking garage built in 1931 has been renovated and reused to become the parking facility for a new transit-oriented residential complex, with new retail and residences. 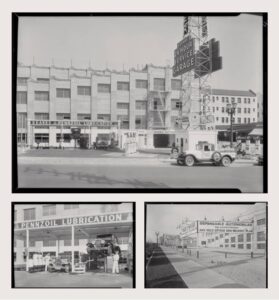 It combines them with a landmark, five-story parking structure (originally Pellissier Square Garage) rehabilitated for parking, retail and rooftop amenities, all just steps from the Metro subway.

Prior to revitalization, the structure was cluttered with haphazard signage and orange paint in an effort to draw attention from vehicular traffic.

Design by the architects at KTGY, the project dramatizes Los Angeles car culture at a crossroads. As the city grapples with its housing shortage, even the most iconic – but faded – auto-centric sites may turn to housing.

But rather than demolishing and building new, Western Station is a rare example of a historic garage integrated into a transit-adjacent new community.

Now in the heart of LA’s Koreatown, the art-deco-inspired structure was designed by Morgan Walls & Clements, architects of classic L.A. theaters such as Wiltern Tower, El Capitan, Leimert and The Mayan, as well as landmarks Chapman Plaza and La Fonda restaurant. 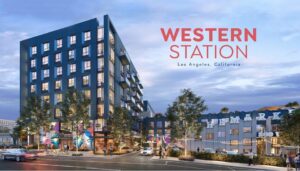 “KTGY is returning the structure to its original patterned façade that marched up, following the form of the garage ramping,” says KTGY Associate Principal Keith McCloskey, LEED AP. “It will now fold into the new building to create a bold T-formation.”

This is where the new eight-story residential building will hold the edge of 8th Street to the north while the existing garage runs north-south set in from Western Avenue’s street frontage.

This preserves the integrity of the existing building, including classic zigzags and chevrons. Its rooftop will house an expansive pool deck with gardens, sitting areas, outdoor dining and stunning views to the Hollywood sign and downtown skyline. This new terrace links with the new residential building and approximately 5,000 square feet of indoor amenities via a pedestrian bridge.

“The new building is clad in a smooth, tight, blue-gray that’s compatible with the cooler tones of the nearby, historically connected Wiltern Tower,” says McCloskey.

“But it takes on its own new identity by subtly introducing the Wiltern’s patinated green, known locally as Pellissier Green. Although the new building is contemporary in style, the vertical balcony slots with angled planes help to capture surrounding Art Deco history,” he concluded.

The result is a fusion of new and old, transforming L.A.’s car-culture for the future in a diverse, transit-rich neighborhood. Western Station qualifies as a Tier 3 Transit Oriented Community due to its proximity to metro stops.

This allows higher density per acre than the underlying zoning, and 10 percent of its units to be Affordable, for Extremely Low Income (ELI) residents.

All images courtesy of KTGY.