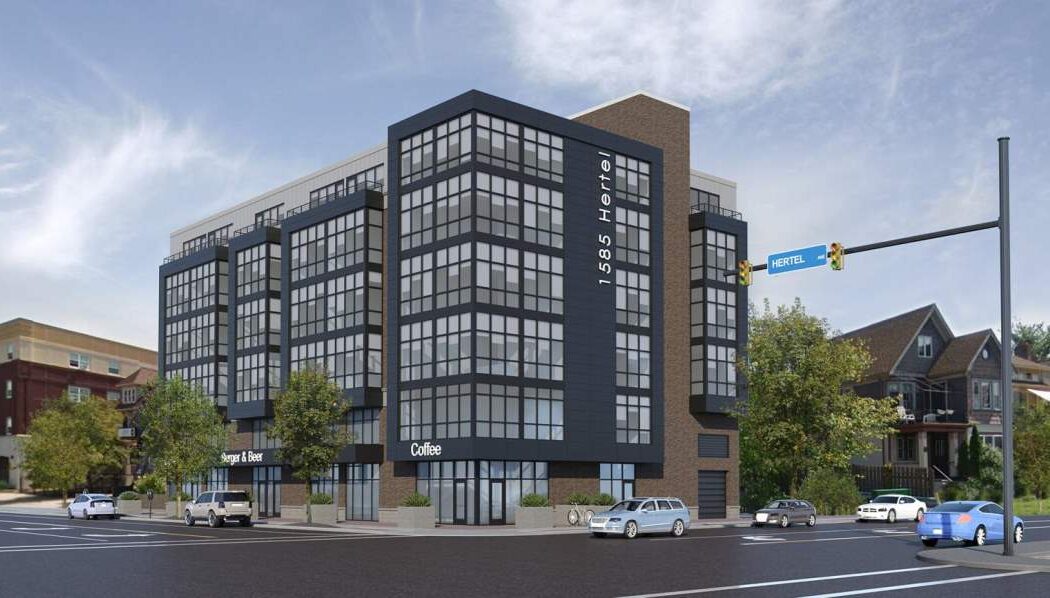 On July 8, 2021, a $7 million project to redevelop a brownfield into affordable housing and retail space was launched in a revitalizing part of North Buffalo, New York.

Supported by the Better Buffalo Fund and located in the heart of the Hertel Avenue Business District, the five-story mixed-use building includes ground-floor retail space, residential apartments on the upper floors, and underground parking.

Buffalo Mayor Byron W. Brown said, “Once again the Better Buffalo Fund is fueling a game-changing project in our city’s neighborhoods and along our commercial corridors. Transforming an idle gas station into a mixed-use building with new affordable housing and commercial space continues the ongoing renaissance on Hertel Avenue. I thank Governor Andrew Cuomo and Empire State Development for aiding this $7 million project with a $500,000 grant, enabling private investors to move forward, and continuing the revitalization of this key Buffalo business district.”

The site of a former gas station, the project at 1585 Hertel Ave. was developed by John Daly, a managing principal and engineer at Trautman Associates and principal of O’Dalaigh Real Estate LLC, and his wife, Ruthanne.

John and Ruthann Daly said, “We are delighted to announce that we are finally done with construction. We want to thank everyone who stuck with us through the pandemic to help us reach this point today. That list includes tenants, contractors, lenders, government officials, the community -especially the North Buffalo Organization and the Hertel Business Association -and last, but certainly not least, Empire State Development. They have all helped bring this project to fruition. We accomplished what we set out to do: transform an environmental liability into a community asset. The building has been well received by the community as evidenced by our rapid lease up on both the residential and retail fronts. Our tenants are already adding to the vitality of this neighborhood, helping it grow stronger.”

The couple invested $6.5 million to convert the former brownfield at the Parkside Avenue intersection into a handicap-accessible mixed-use building with 34 apartments and ground-level retail space and underground parking.

“We not only want to provide every Western New Yorker with the dignity of a roof over their head, but also the keys to opportunity,” said Lieutenant Governor Kathy Hochul. “The completion of new commercial and affordable housing in the Hertel Avenue Business District is yet another important step in Buffalo’s post-pandemic economic comeback story.”

The apartments range in size between 500 square feet and 1,055 square feet and are priced at or below market rate and include one unit that is ADA compliant. Other amenities include a partial green roof that can be enjoyed by tenants, bike storage and dog washing areas. The fully leased first floor commercial area includes a bridal boutique, a healthcare business, and a gym. More than 85 percent of the residential units are leased, with the remaining expected to be filled by early fall.

Senator Sean Ryan said, “This is exactly the type of project the Better Buffalo Fund was created to encourage. Hertel Avenue is one of our city’s most vibrant and walkable business districts. By converting a former brownfield into much-needed affordable housing, this project is attracting new residents to the heart of the neighborhood and contributing to Buffalo’s economic recovery from the pandemic.”

The project received a $500,000 infill grant from the Better Buffalo Fund via the North Buffalo Organization, which initiates projects that support, sustain and improve the community’s quality of life. The project leveraged local private funds and continues the revitalization of the Hertel Avenue Business District.

Empire State Development Acting Commissioner and President & CEO-designate Eric Gertler said, “As we move forward from the pandemic, the Better Buffalo Fund continues to be a catalyst for change, and in a must-visit neighborhood that showcases Buffalo at its best. Thanks to strategic investment, residents moving into the new affordable apartments on Hertel Avenue will have access to a vibrant district that has reinvented itself one building, one store, and one restaurant at a time.”

Through four rounds of the program, the Better Buffalo Fund has awarded more than $31.9 million to 51 projects. These projects are renovating more than 554 residential units and more than 514,200 square-feet of store front and commercial space, while also leveraging more than $253 million in private investment in Buffalo. Empire State Development and state Homes and Community Renewal administer these funds.

North Buffalo Organization Board of Directors Vice President Patricia Banning said, “This construction project, at a well-traveled North Buffalo intersection, is a major accomplishment and will add significant economic and social value to our community. 1585 Hertel Avenue is bringing more people and businesses to North Buffalo while also catalyzing other local residential and commercial development. All of this adds to the vibrancy needed for a successful community.”

Homes and Community Renewal Commissioner RuthAnne Visnauskas said, “The state has made a concerted and effective effort to spur the ongoing resurgence in Buffalo neighborhoods. This new $7 million development through the Buffalo Main Streets Initiative, the result of a public-private collaboration, is a highly visible reminder that transit-oriented and mixed-use development is a game-changer in these communities. The site of a former gas station, now retail space and apartments, is clear evidence that we are now, and have been, hard at work to keep progress building in Buffalo.”

Assembly Majority Leader Crystal Peoples-Stokes said, “The construction completion of a once vacant gas station turned into a new five-story commercial space and affordable housing development serves as a shining example of the Buffalo Better Fund commitment to revitalize our community. I applaud Governor Cuomo’s leadership and investment in Western New York through the Buffalo Billion.”

“Our efforts to build back a better New York depend on projects that bring new opportunity to residents and businesses alike,” Governor Andrew M. Cuomo concluded. “This project, like many others supported through targeted investments from the Better Buffalo Fund, is helping to transform a once vacant site into a vibrant mixed-use space that will bring new vitality to an area of the city that is on the rise.”

Applicants apply for grants and revolving loan funds through the Better Buffalo Fund for one of two initiatives—Transit-Oriented Development and Buffalo Main Streets.