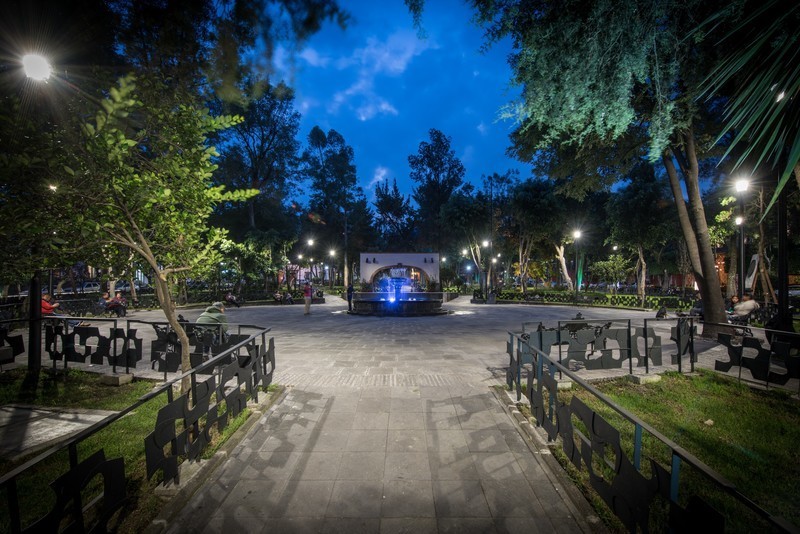 Long-time readers of REVITALIZATION probably know that I love Mexico City. My wife (Dr. Maria MacKnight) and I (Storm Cunningham) have been spending a month or two in Mexico every year for the past quarter-century, and always allot at least a week of that to Tenochtitlan (the original Aztec name for the city). 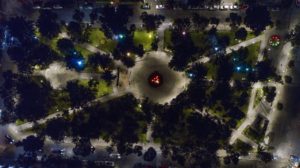 Located in the heart of the beautiful San Angel neighborhood of Mexico City, San Jacinto Square has been one of the most relevant commercial and social spaces in the area for centuries. It’s certainly one of favorite places, especially on Sunday, when the Bazaar del Sábado fills the space with artists.

The project was commissioned by the INAH [National Institute of Anthropology and History], Mexico’s top authority in the investigation and preservation of cultural heritage. INAH documents and plans indicate that the original design of the square dates back to the 16th century, in what was then known as Tenanitla (meaning “next to the stone wall” in Nahuatl).

Architecturally, its elements have been replaced over time with 20th century components, including different types of concrete, as well as flagstones and fountains that have been transferred into the square from other public spaces in the city. Consequently, the only remaining original element of the plaza is its layout. 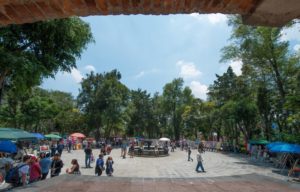 Embracing the space’s past, as well as its current role as an artistic, commercial, and social gathering point in San Angel, the interesting pastiche allowed the architect to create an entirely new code that can be applied to other public spaces in Mexico City as well. The resulting new look for Plaza San Jacinto is guided by the concepts of aesthetic and design unification, artistic process, and defining the purpose of public spaces.

Given that the plaza today is best known for its handicraft and artist market, it was important for the architect to give prominence to artistic and manual processes. The modern version of the square no longer includes steps or slopes to block universal access, so the pathways were homogenized with volcanic cobblestone, using manual machete cuts against the stones to create a thematic texture throughout the square. 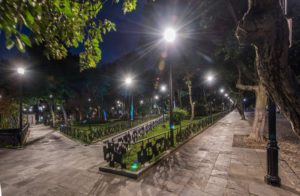 To compensate for resulting variances in the angles and settings of the volcanic cobblestone, chinked stones were embedded by hand using a technique called rajueleado. Additionally, to make the space safe and accessible at night, engineer Jorge Zinser developed a new lighting system to cover the entire public square, without being invasive.

However, it was the design of new metal guardrails to protect the square’s lush green areas that combined the symbiotic worlds of Alejandro de la Vega as both an artist and architect. In the aesthetic conception, he envisioned the adaptation of one of his own original works as a relevant and decorative design element that would animate the purposeful fencing.

Using manipulations of his evolving sculpture, Silhouette, and by applying his expertise in parametric techniques, he created a new pattern, made laser and nitrogen cuts to produce the pieces, and then married his art to his architecture through robotic welding, ensuring precision and quality. Once assembled, the pieces were painted with electrostatic paint for durability. 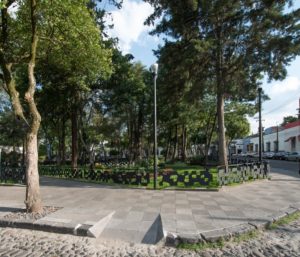 Historically, public squares are the places where communities and their histories are experienced and written.

With today’s landscape of artists, picnickers, strollers, lovers, and much more, a project that didn’t consider those demographics would make no sense.

So, while respecting the history and significance of the Plaza, Alejandro de la Vega’s vision of today’s public usage of the square is what provides the project’s true value, from the fencing’s aesthetically-compelling merger of art and architecture, to the Plaza’s universal access ramps, cobblestone paths, and more.

Collectively, the design, processes, and materials used to revitalize the historic square were prioritized in order to build a revitalized, 21st century version of Plaza San Jacinto, by giving its users the opportunity to enjoy it at all times.

All photos courtesy of Jaime Navarro.